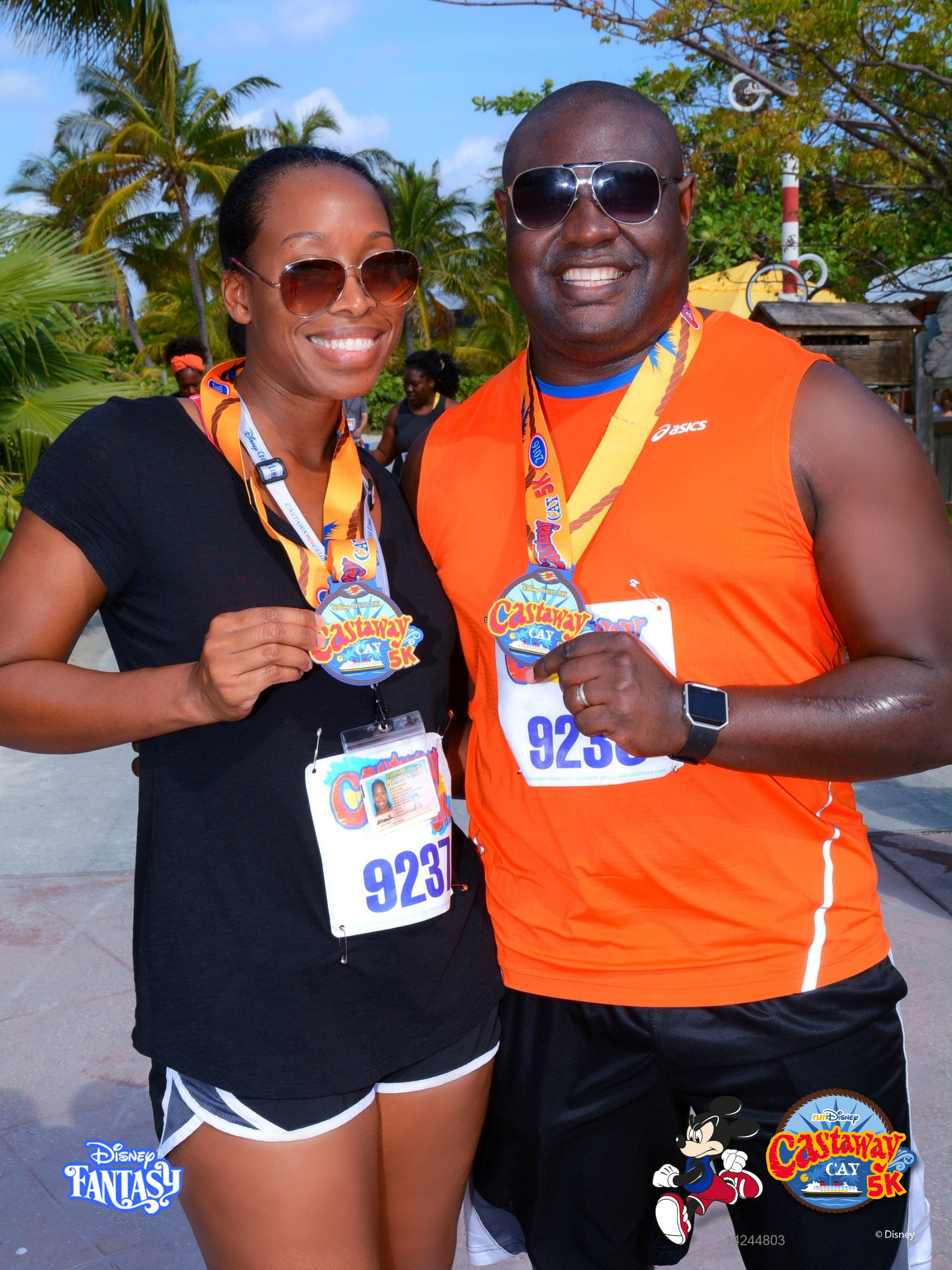 Earlier this year we were blessed to take a trip on the Disney Fantasy, cruising the Caribbean.  On our final day we stopped at Castaway Cay, Disney’s private island.  On each Disney cruise that stops at Castaway Cay, there is a 5K run that occurs first thing in the morning, before most cruisers are ready to head to the island for the day.  The Castaway Cay 5k run is free to all cruisers but you must sign up in advance and participants must be 10 years of age.

We signed up the day before to run the Castaway Cay 5k and met in the Tube at 8am on that morning, with our girls (we were told that we could drop them off at the island kids club – Scuttle’s Cove- prior to the start of the race. 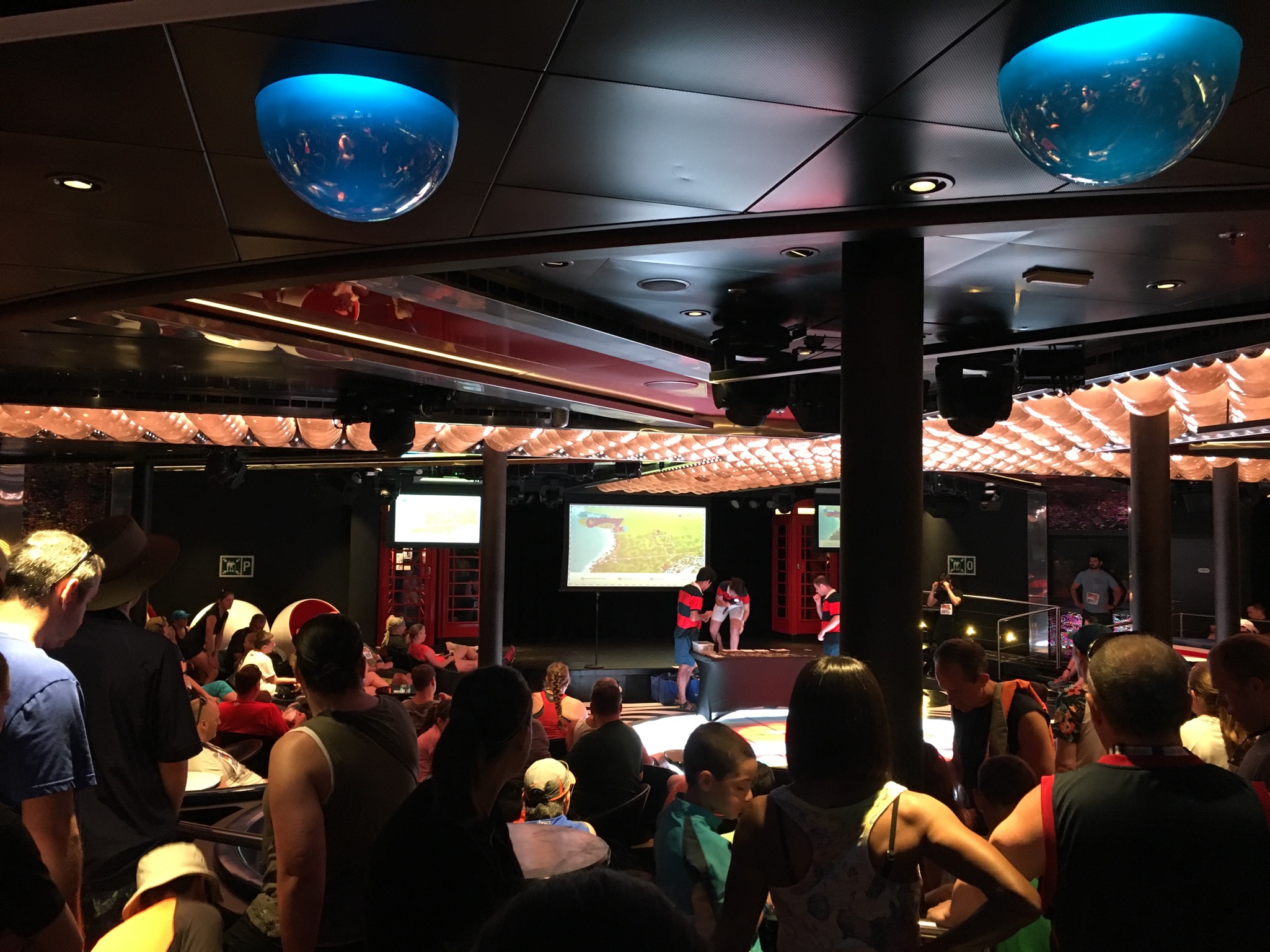 The 5k check in process was quick and efficient. There were 3 staff members in charge of managing the event and they were a lot of fun. They provided detailed information about the route with little suggestions thrown in along the way. It truly wasn’t all that complicated to begin with and we were soon heading down to deck 1 as a large group, ready to disembark.

Stepping foot on the Castaway Cay pier was a wonderful feeling as always. The weather on this day was a sunny and mild 75 degrees with a steady breeze. The 5k runners were the earliest groups onto the island so as we all walked to the starting line which was located in the center square I made a quick detour onto the beach and laid down our beach bag and a few items on two beach loungers nearest to the crystal clear waters. We also signed the girls in to the Scuttle’s Cove kids club not far from the port.  From there we were easily able to catch up with the rest of the group, well before the start of the race. 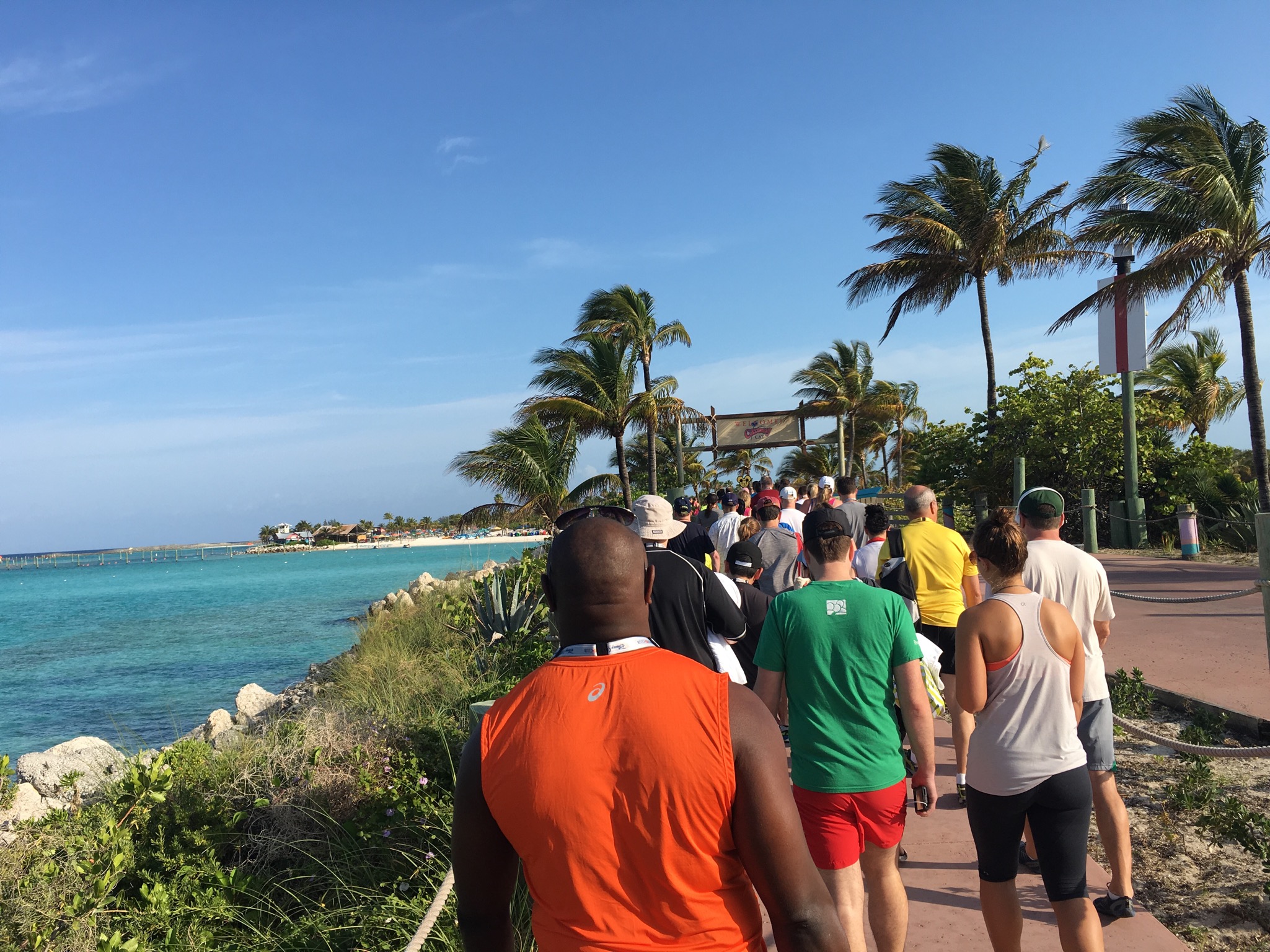 Walking from the pier with the rest of the 5k participants…

The race itself was informal with each person responsible for recording their own times. With a cheer the cruise staff launched the race and the crowd started moving. Some of the group were (obviously) serious runners and took off running immediately but most of us were just looking to have some fun. Hubby and I started walking at a brisk pace; we alternated between running for one minute and walking for two minutes. There were runners of all ages (the minimum age is 10 years) and all levels of fitness. Some people were in their swim gear with cover-ups, some were in sandals and flip flops. As we did our cycles of jogging and power walking we made small talk with others, enjoying the gorgeous weather and beautiful scenery. 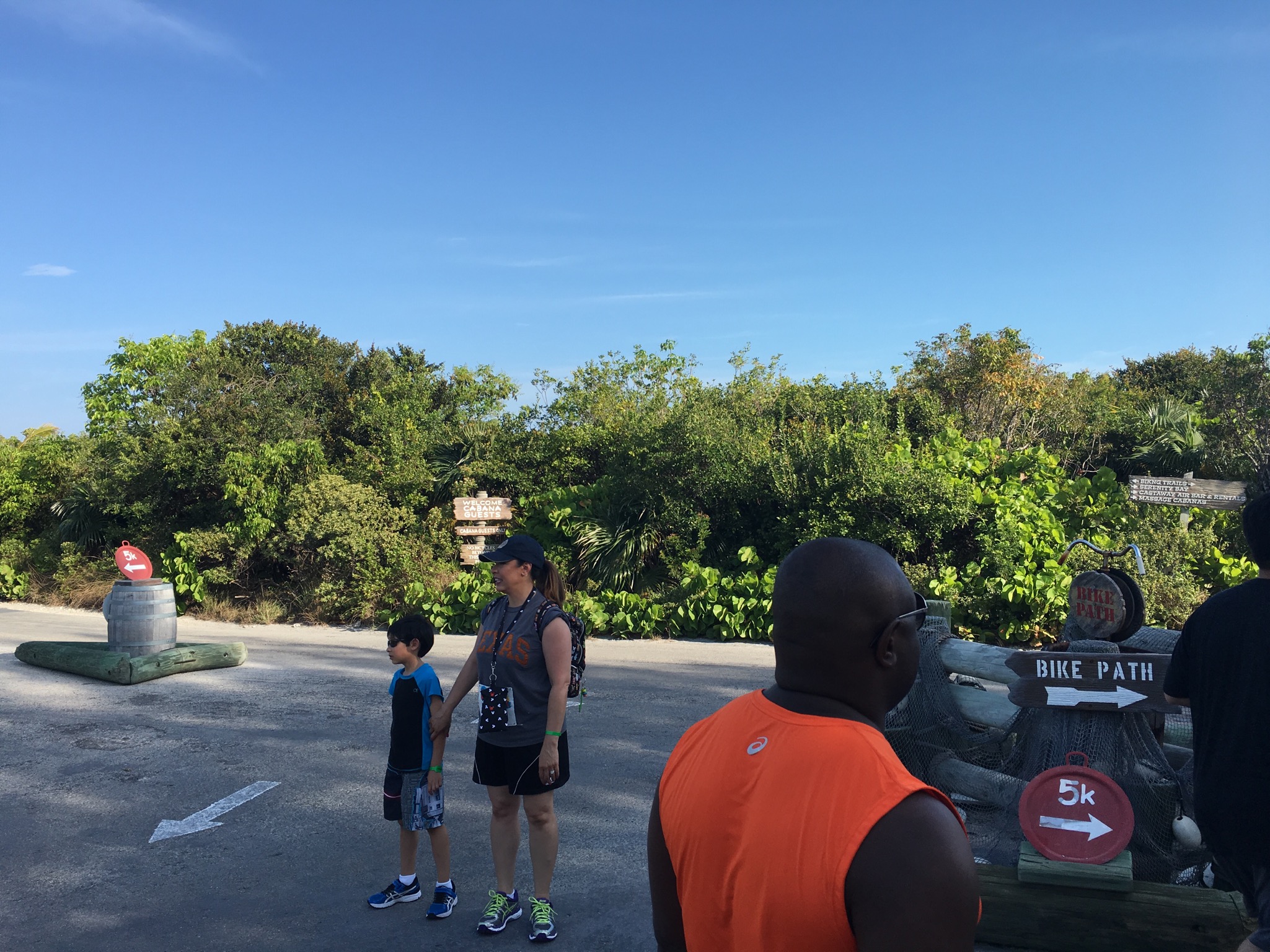 The 5k route circled the bike path twice and followed the airstrip which leads to the adult’s only Serenity Bay. We had to stop and take a look as we’d never been all the way down to this furthest point of the island. The beach was just perfect. 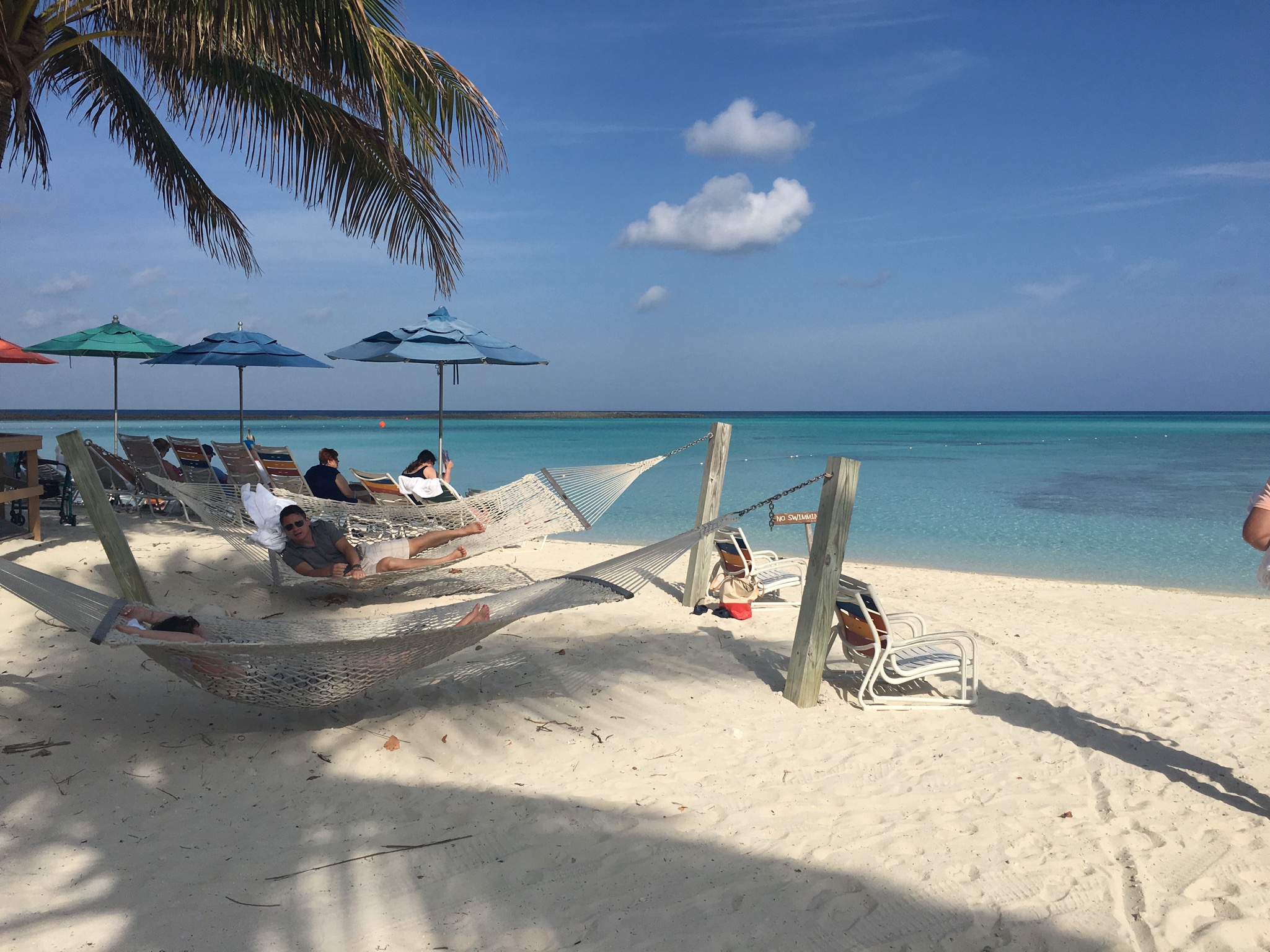 Serenity Bay, the adult only beach on Castaway Cay

Placid, clear water for hundreds of feet beyond shore, hammocks, beach loungers, cabanas and a private, adults only buffet make this the perfect haven of escape. Our stop there was brief but we certainly now know what to look forward to when we return to Castaway Cay in the future. 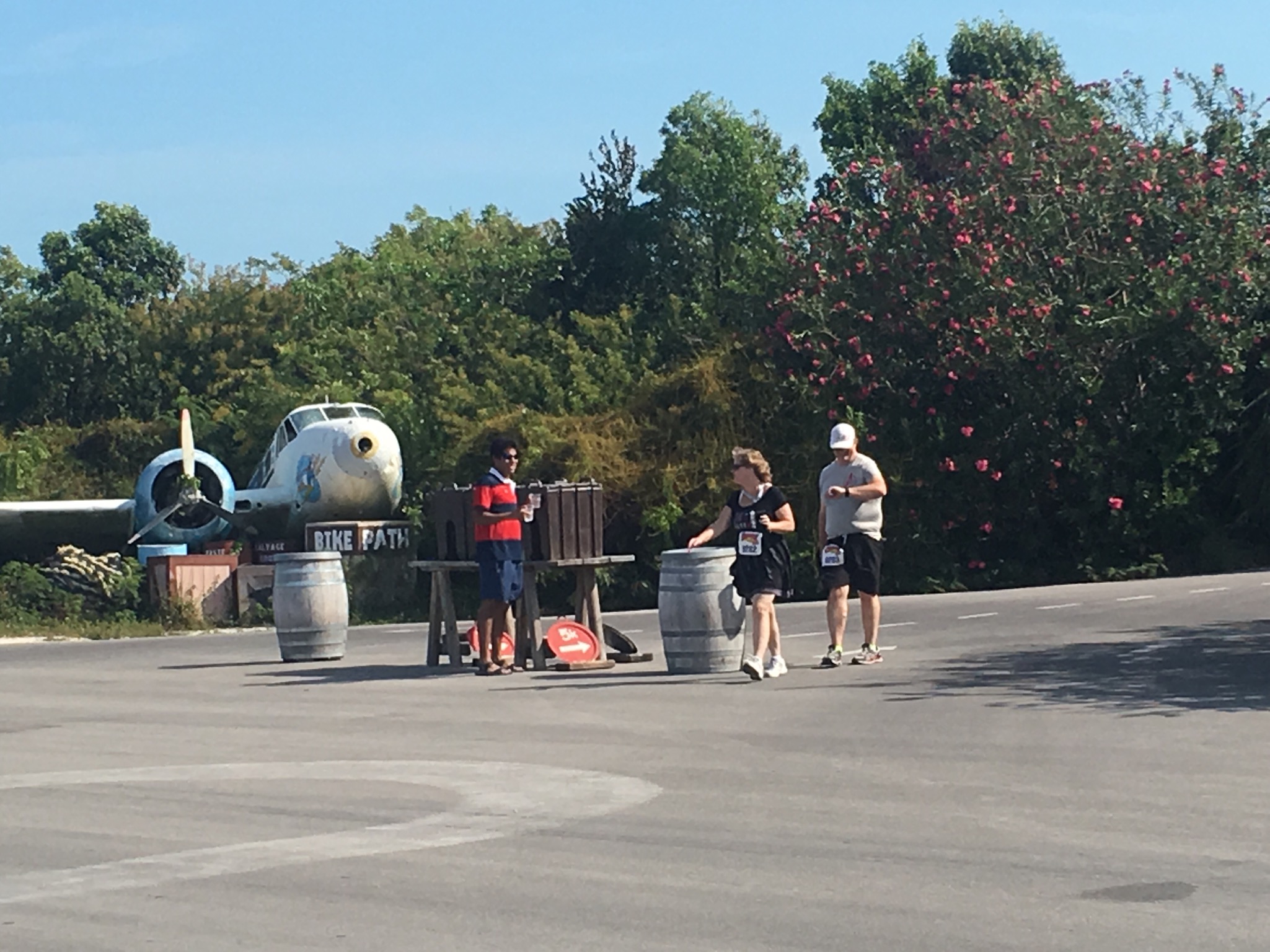 Water Station set up on the 5k route 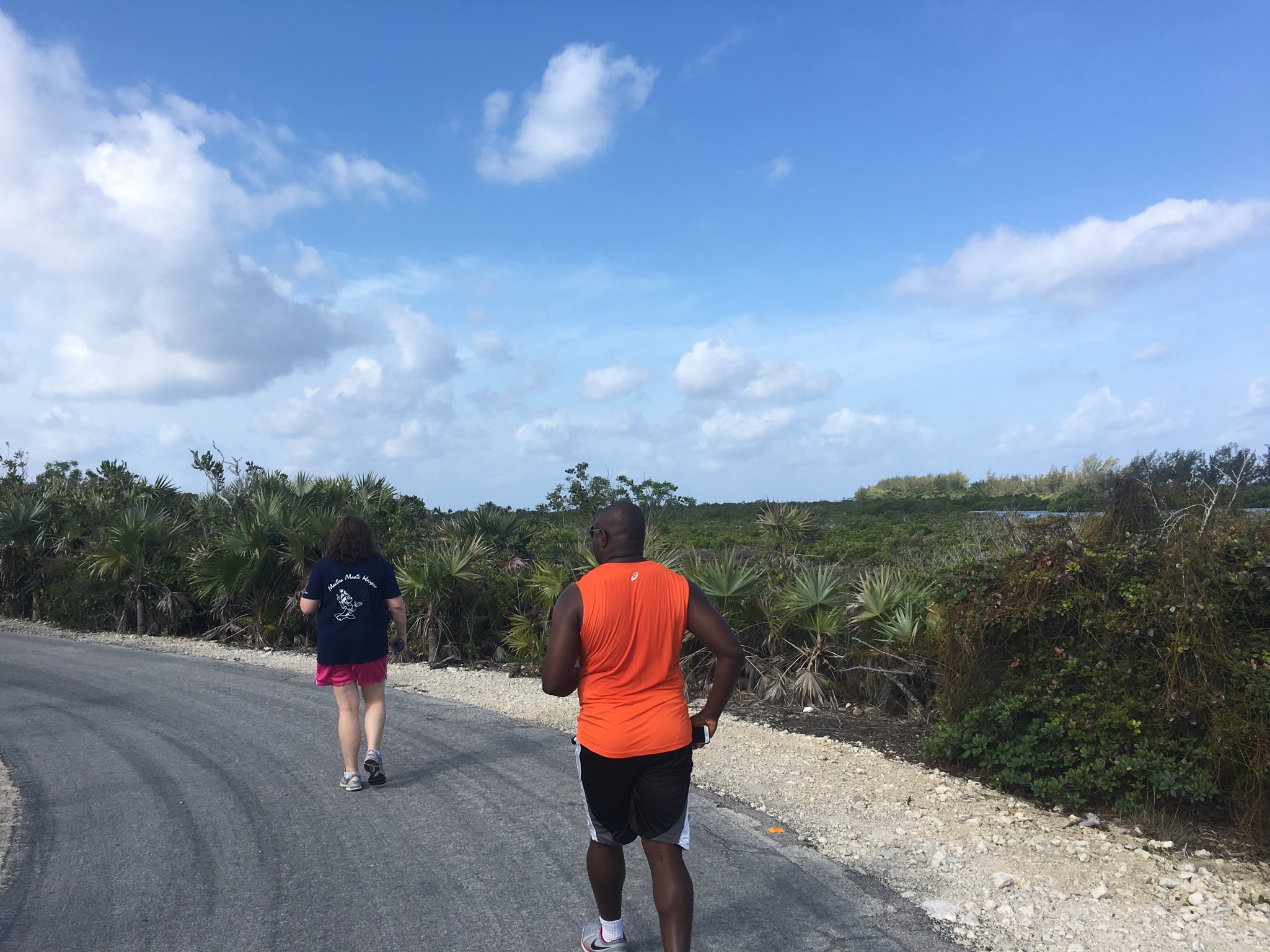 The 5k route was perfectly serene and picturesque

I don’t even know how long it took us to finish the race but we didn’t care one bit. We had a total blast and were so happy to finally earn one of the colorful medals of completion. There was no pressure for us to end at a certain time or keep up with the super fit runners who finished quickly. 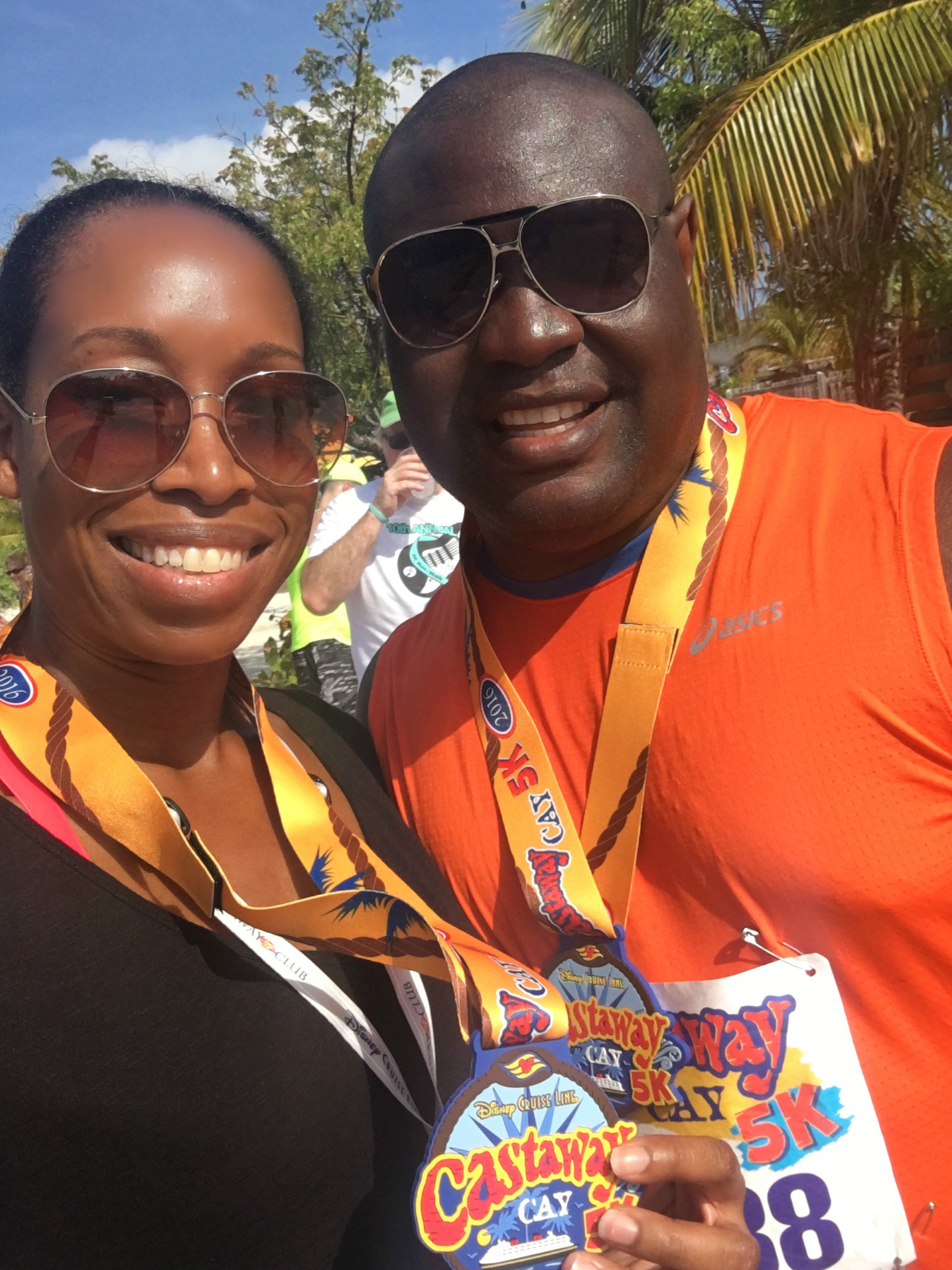 We had a total blast on our first Castaway Cay 5k and we certainly plan to participate in the 5k on our future Disney cruise vacations.  Have any of you run (or walked) the 5k on Disney’s Castaway Cay??