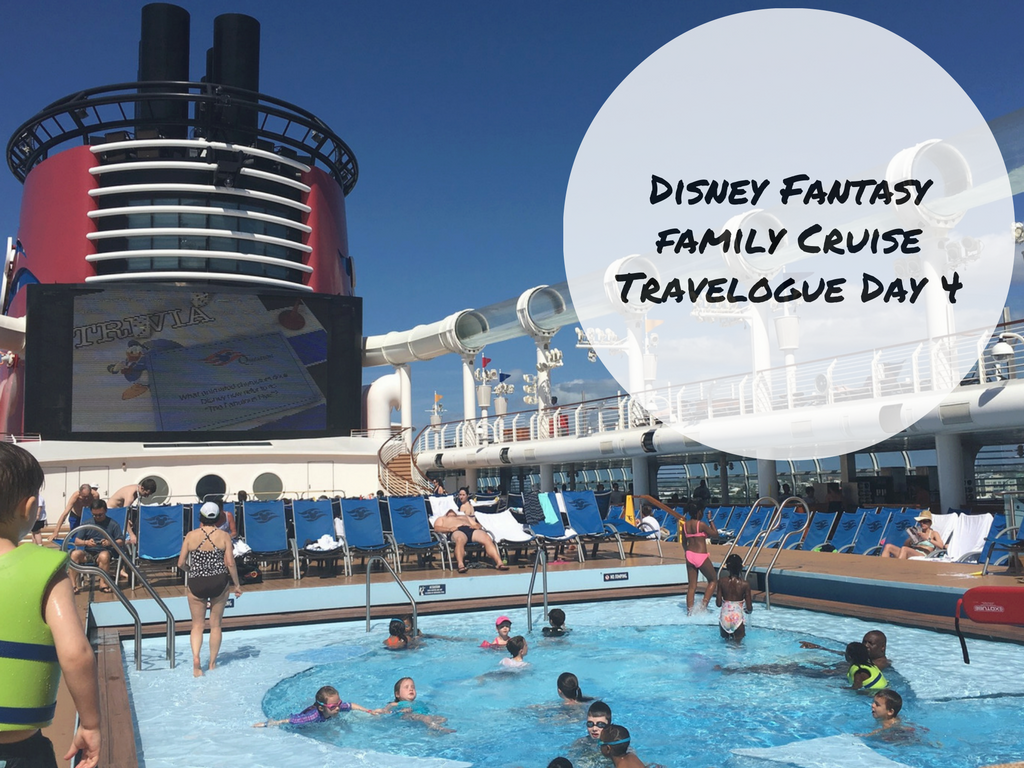 The fourth day of our Disney Fantasy cruise was a port day on the lovely island of Grand Cayman.

As we rolled out of bed that morning we collectively decided that this would be a chill out day for us. We hadn’t booked any port excursions and though we would have enjoyed a day at Seven Mile Beach as we did on a previous Disney Cruise, we just didn’t have it in us to get going…

We did have tickets for the Disney Junior Brunch which was more than awesome!  We enjoyed a great breakfast from the special menu and had more  photo ops than we expected.  (Pics soon to come in another post) 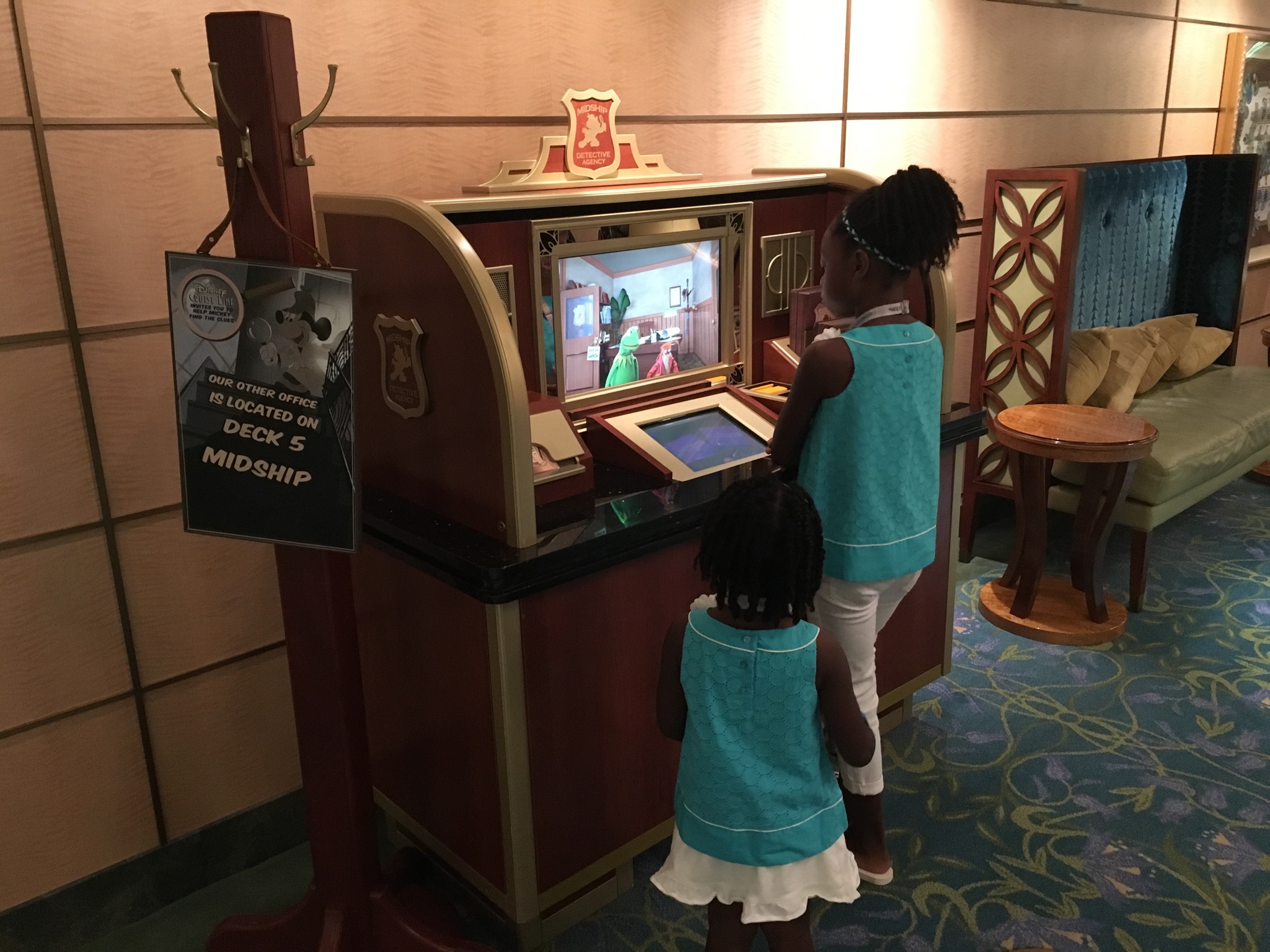 I let hubby rest in our room on the balcony and took the girls around the ship to work on their Mid Ship Detective Agency case. 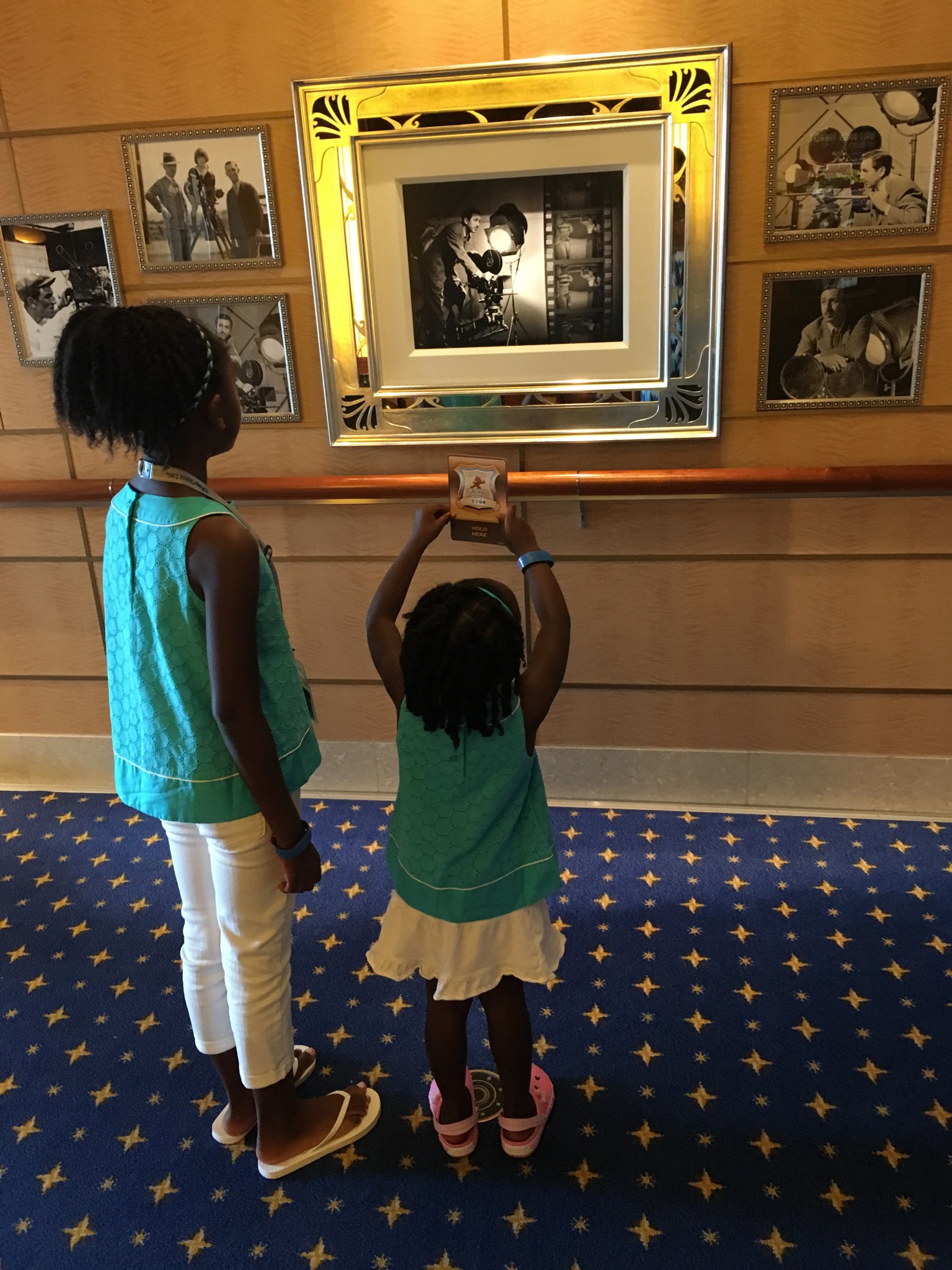 We followed the map locating the clue markers on each floor and each child had a chance to perform a task and share their input for the clues! After a while we decided to take a break from the case research and went down to the Oceaneer Club, which was having open house hours. 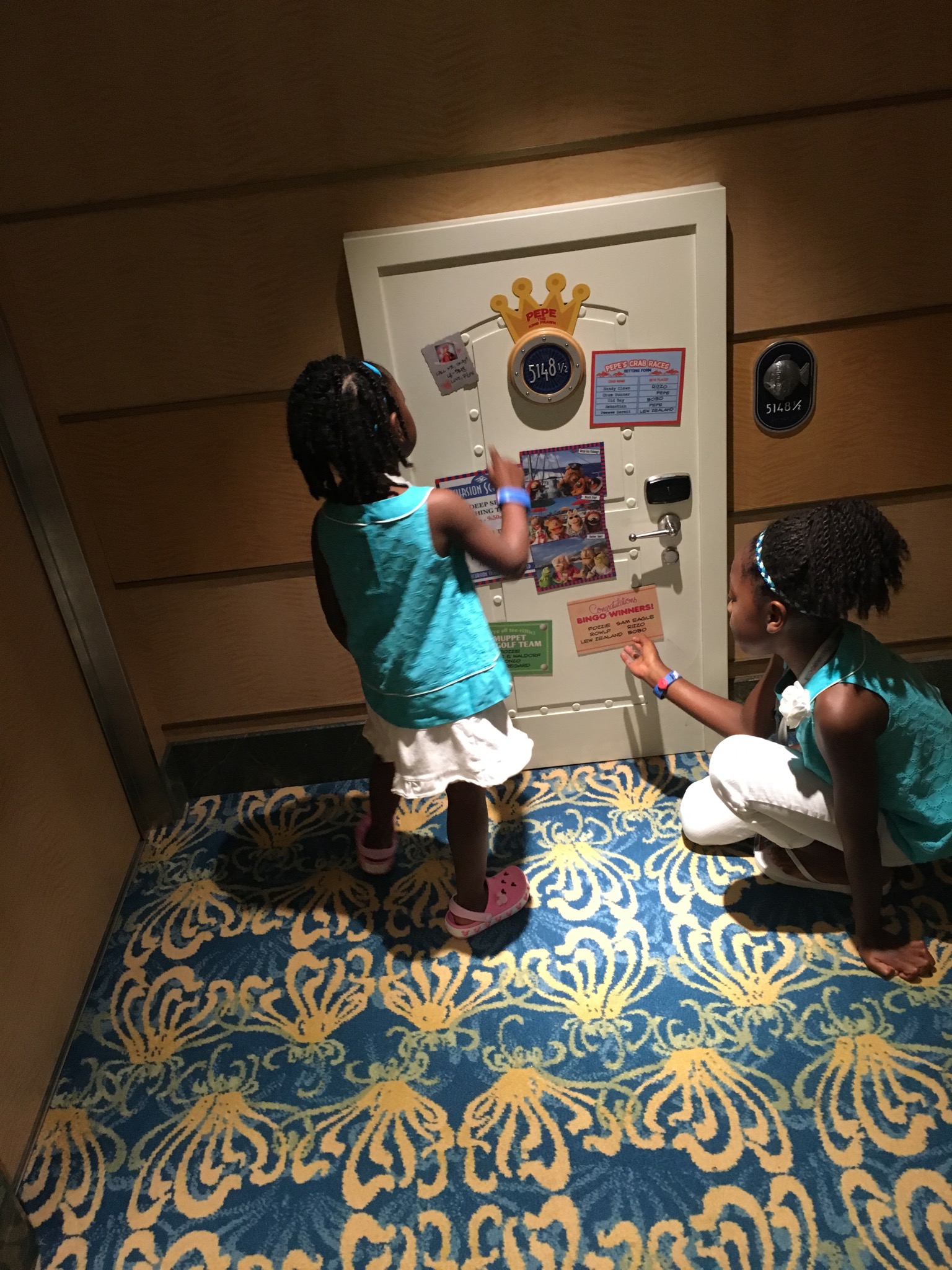 On each day of the sailing both the Oceaneer Club and Lab have a few Open House hours which allows parents to join their kids in exploration of all the exciting things they have to offer. During open house hours, drop off is not allowed but when the Club is open for drop off the Lab may be having open house and vice versa. We hung out in the Club for awhile; I eventually dropped off Jordan to spend time with her friends signed in at the Oceaneer Lab but I was able to enjoy my time with Jasmine in the Club, playing with Mr. Potato head, interacting with Crush from Finding Nemo on the main screen and playing computer games in Pixie Hollow. 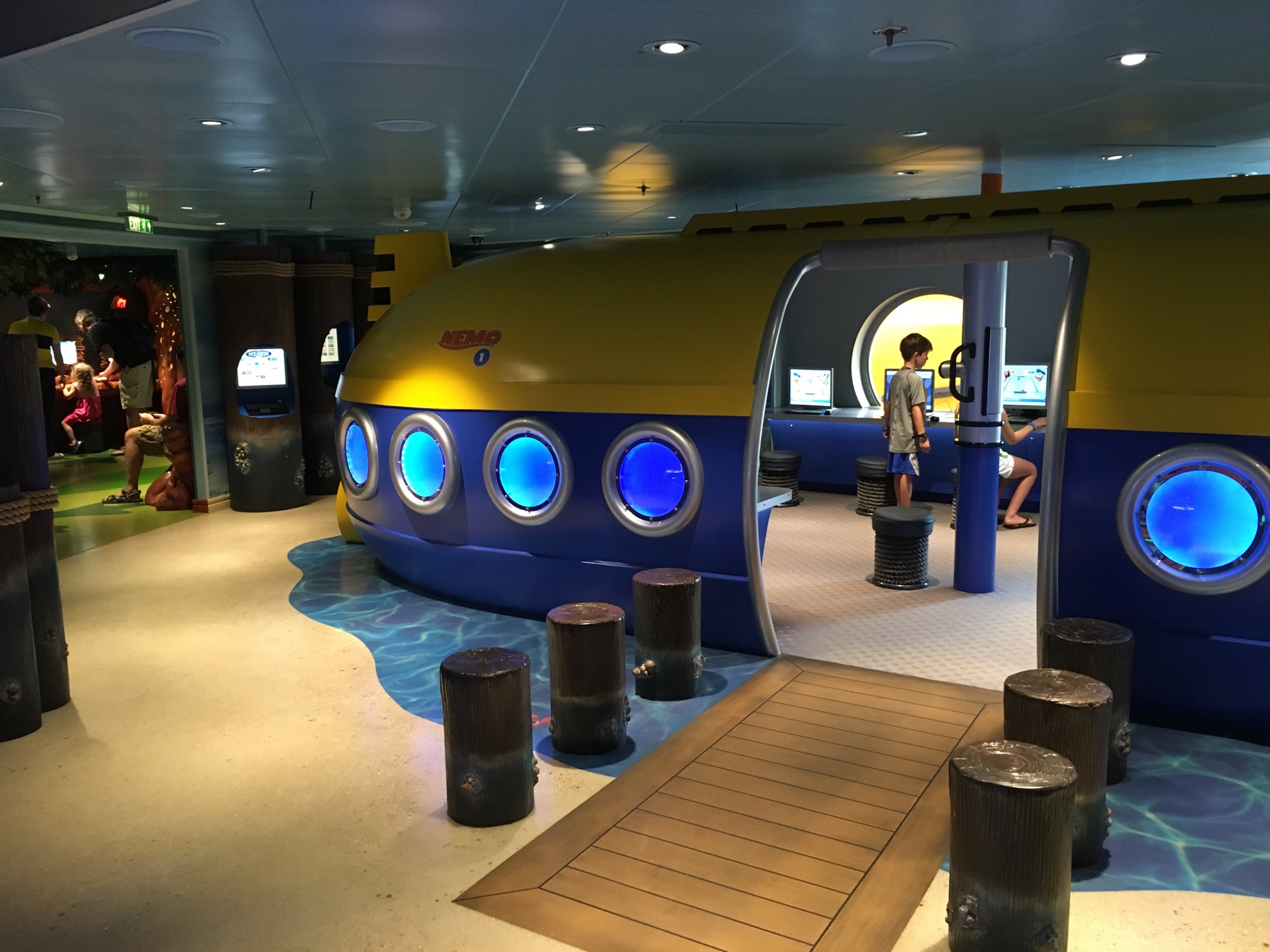 At lunch time, Jordan decided to stay and have lunch with her friends in the Lab so I took Jasmine up to the pool deck to grab a bite at Tow Mater’s Grill and Luigi’s Pizza . 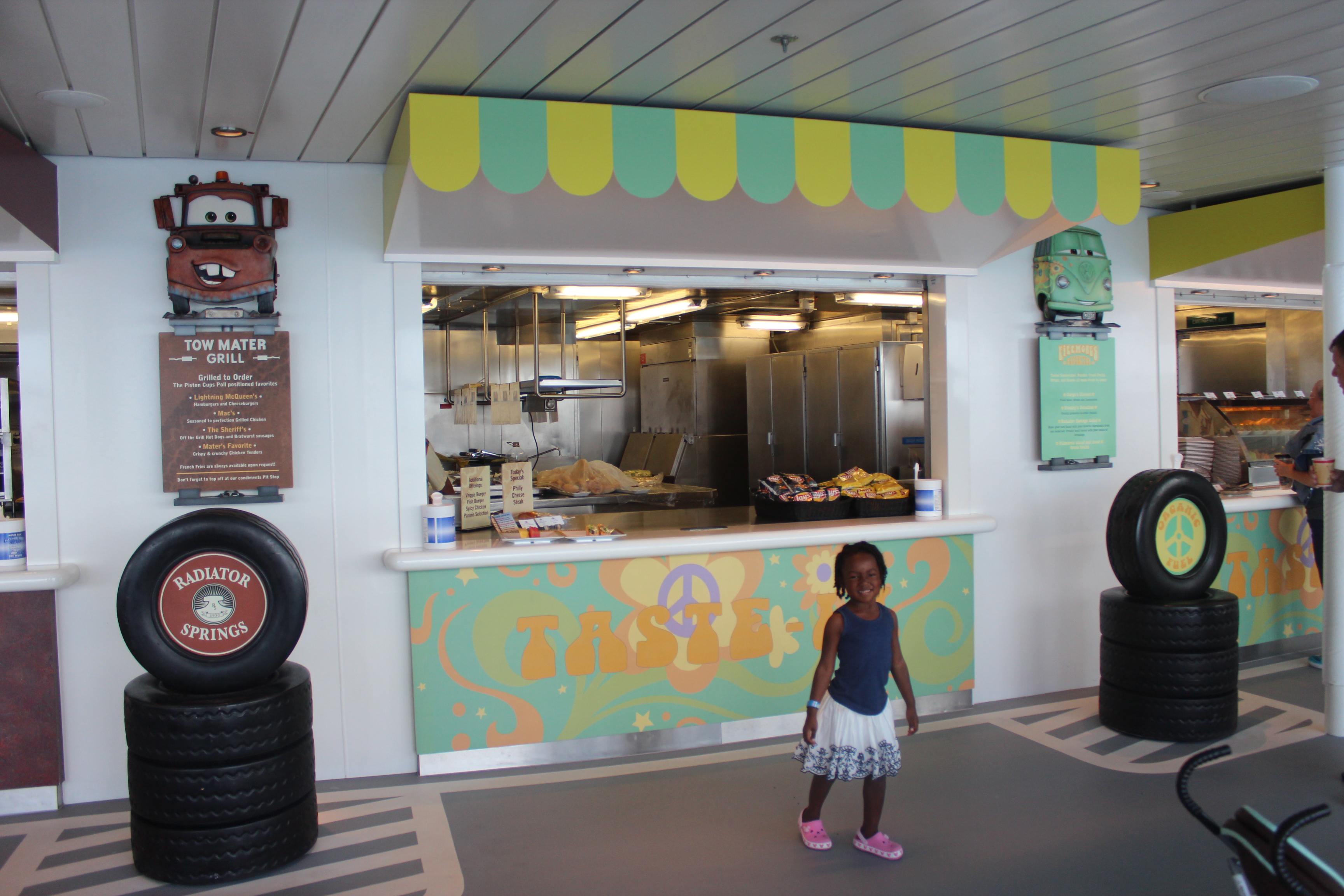 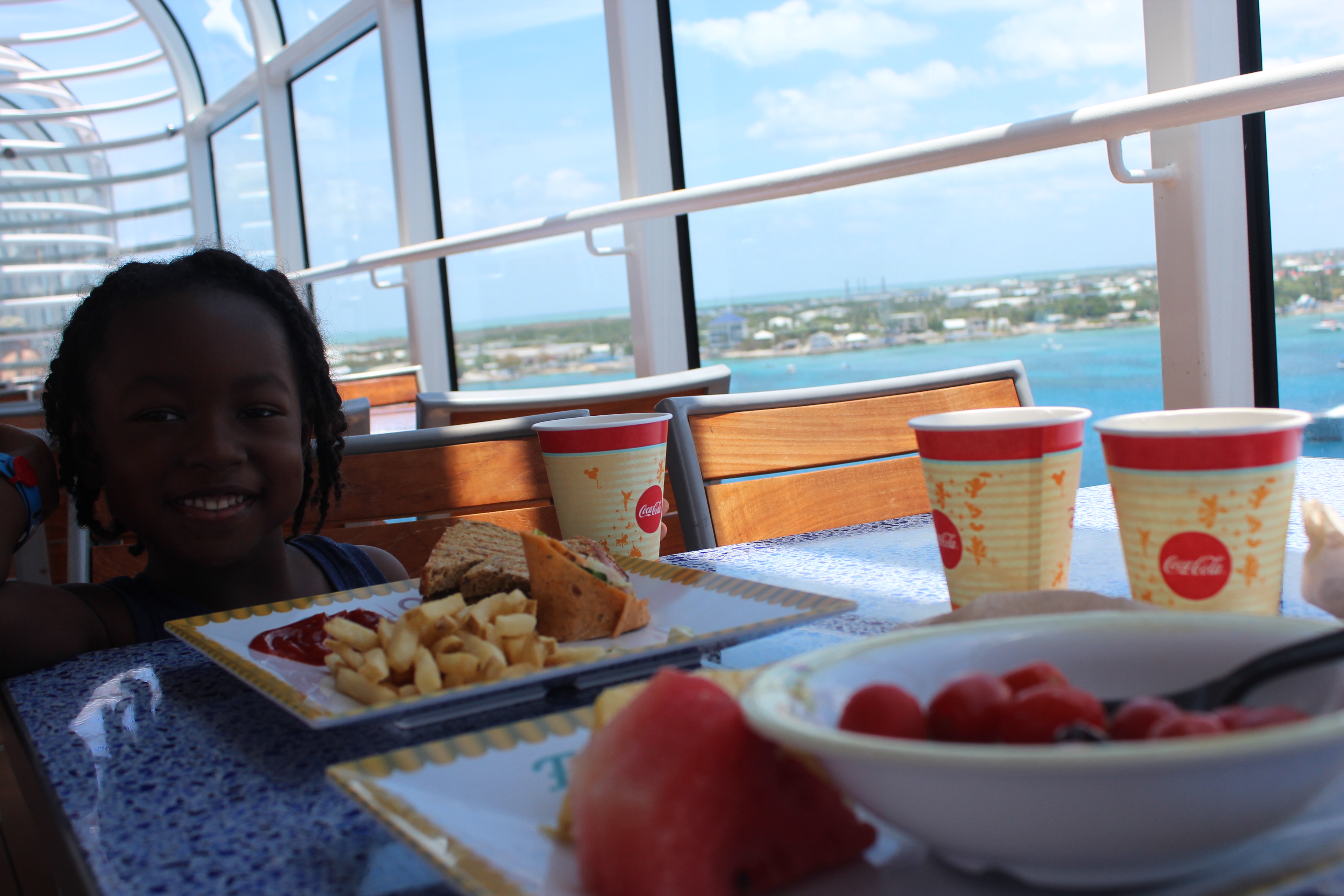 LUNCHIN’ WITH MY JASMINE ON THE POOL DECK, WITH VIEWS OF GRAND CAYMAN IN THE DISTANCE

After lunch we caught the midday showing of the Good Dinosaur in the Buena Vista theatre. It was enjoyable though a little intense at times for our youngest (why does almost every hero in a Disney movie lose a parent? SMH).

The rest of the afternoon was spent in the pools and on the water slides. With most of the cruisers on shore visiting Grand Cayman we were delighted enjoy the pool area and AquaDuck without many lines or crowding. 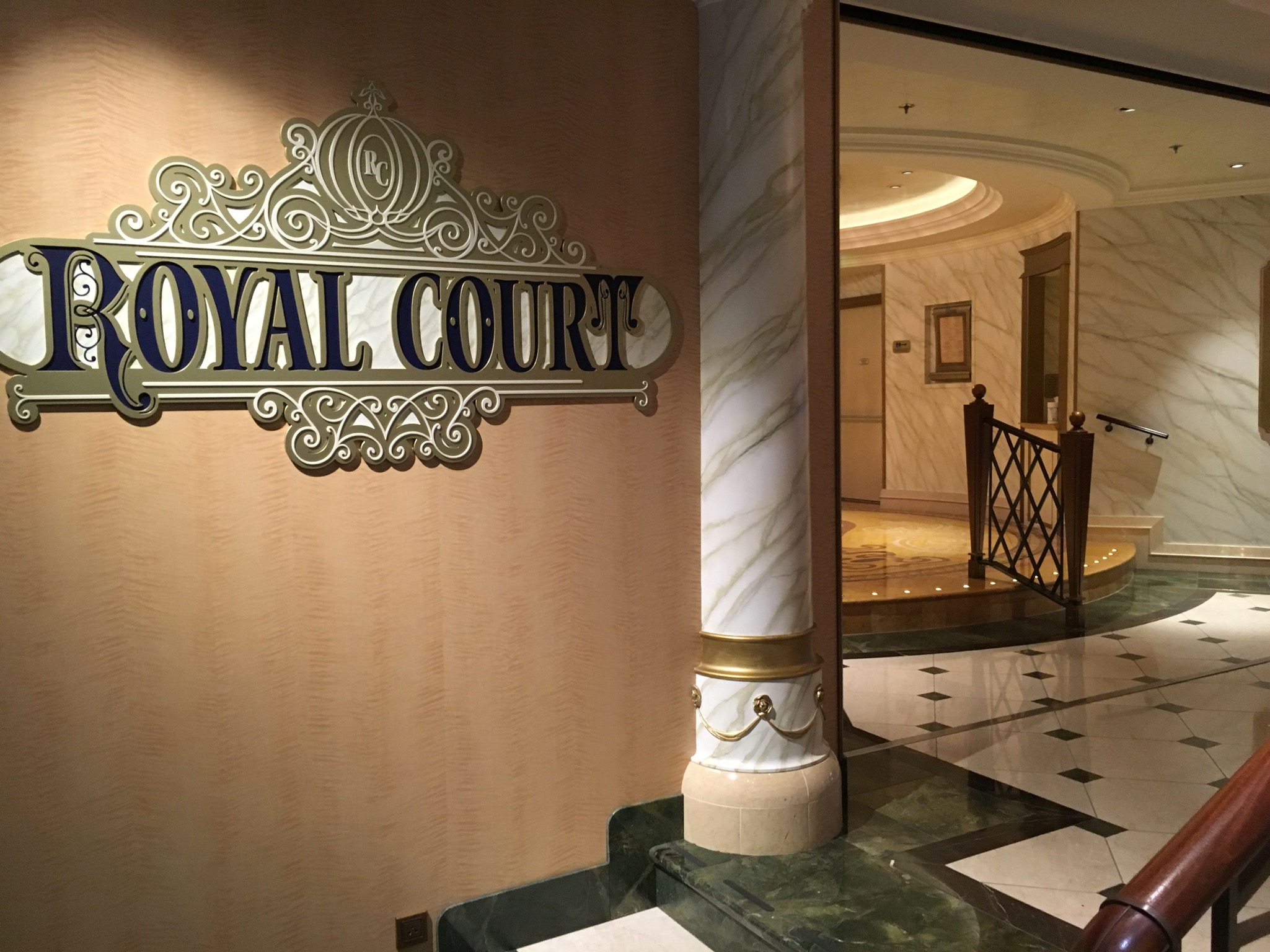 Dinner that night was in the Royal Palace with a Prince and Princess menu. The food was fabulous as always and the service from our team (Ronaldo and Dwayne) was impeccable. 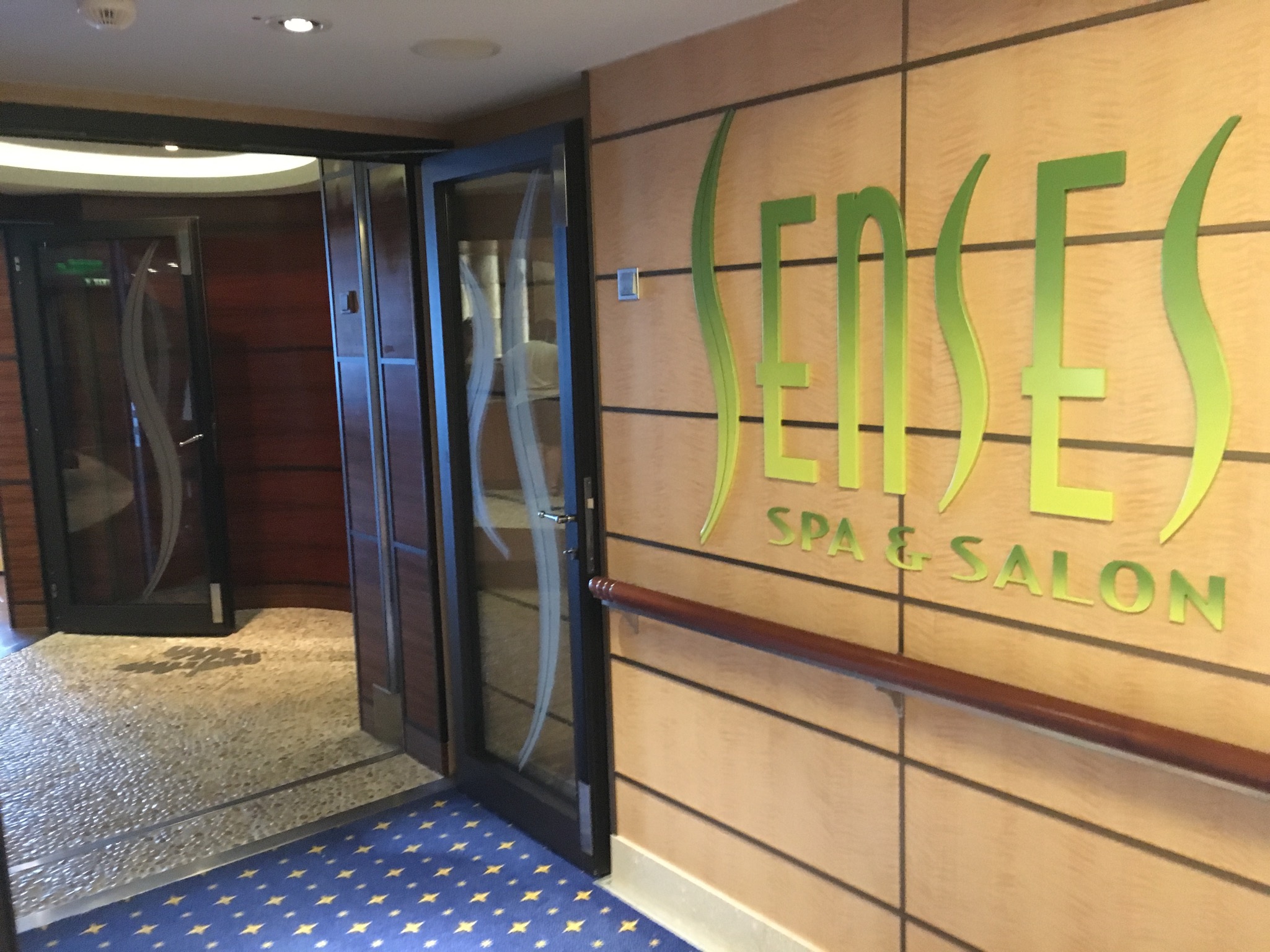 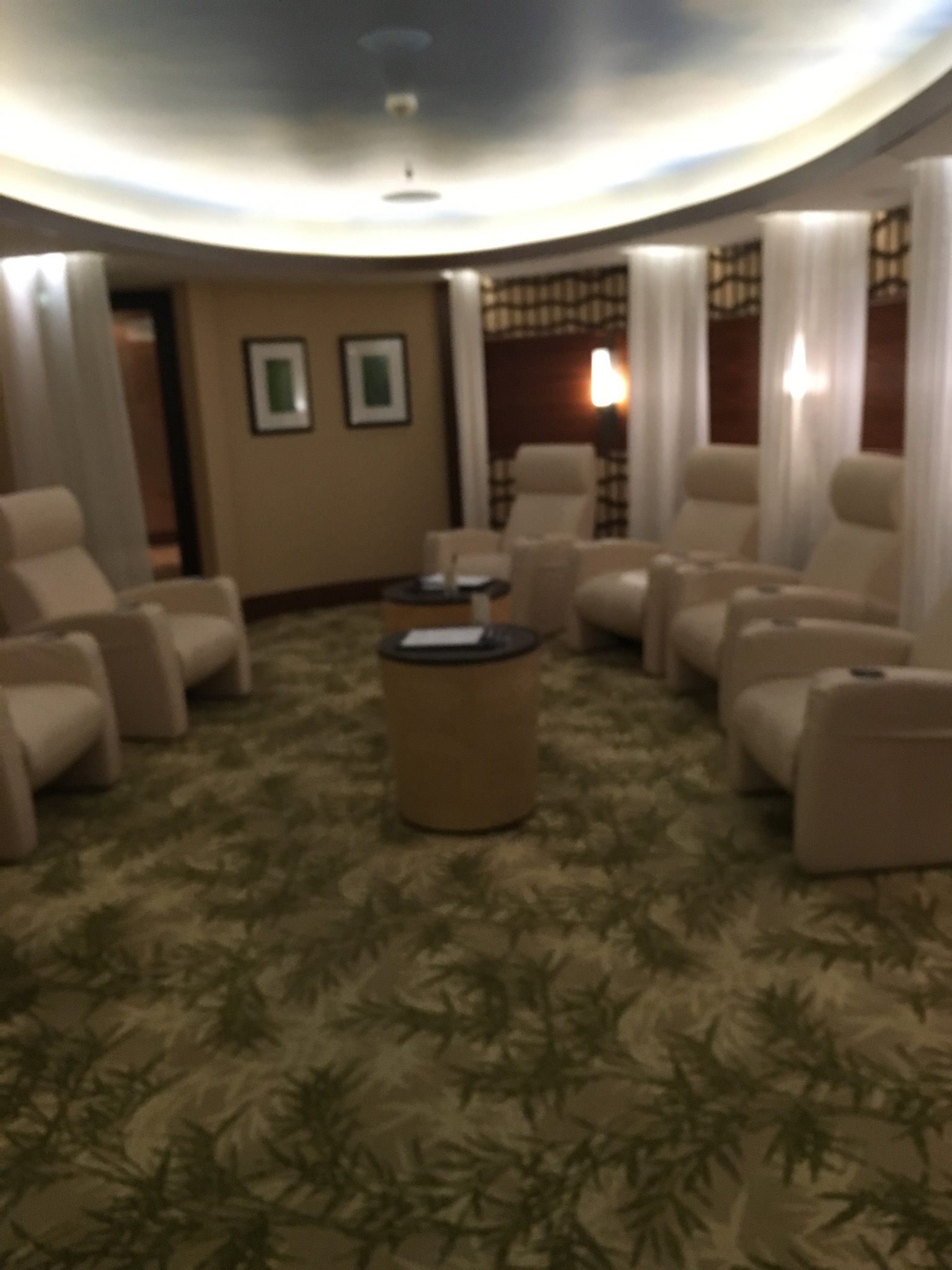 After dinner I headed to the spa where I was able to sample a special package, which included a massage and facial with aromatherapy treatment. It was soooooo good I passed out halfway through but I awoke completely refreshed and feeling calm.  After my spa treatment I was treated to a quick tour of the facilities there; they were superb and I will certainly have to write a separate blog post about the spa soon.

I was so relaxed following my spa experience that I had wobbly legs as I headed back to my stateroom.  It was a good thing that everyone was asleep when I arrived and all I had to do was fall into the heavenly Disney bed.