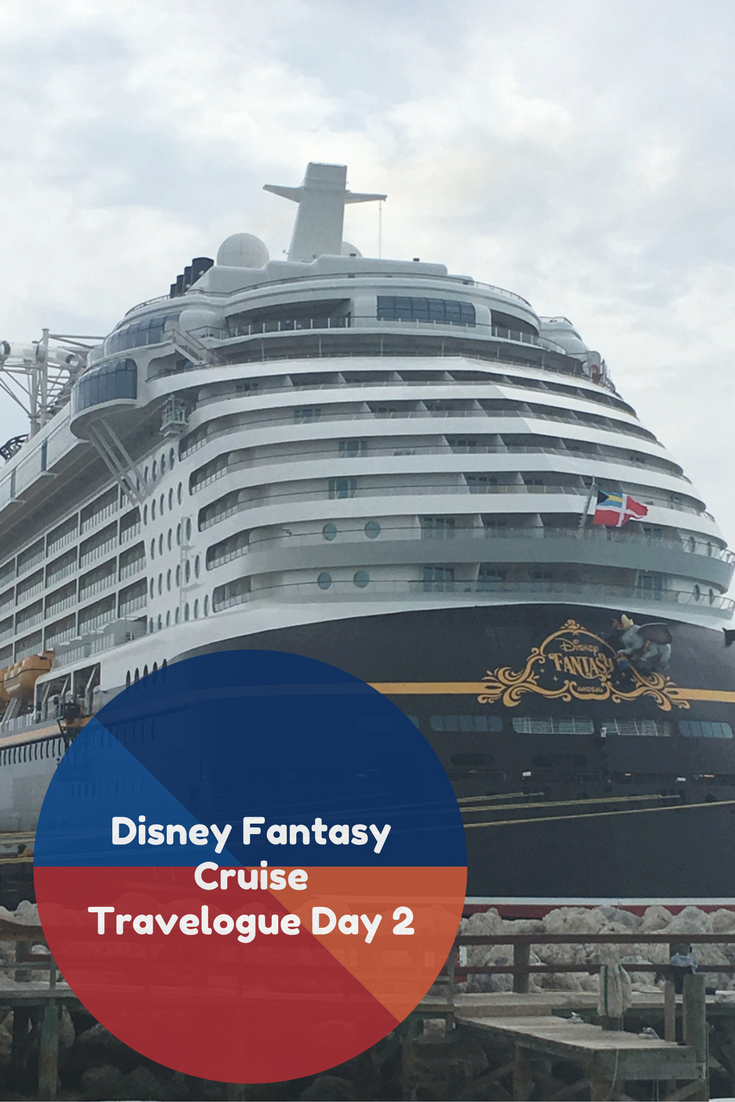 We took a trip on the Disney Fantasy in Spring of 2016 to the Western Caribbean.  The first full day of our cruise was a restful sea day with nothing to do but explore the awesome ship. We all awoke around 7:30 am and after spending some quiet time as a family we went up to Cabanas for breakfast. At 8:45 am the buffet restaurant was bustling with cruisers, most of them already outfitted in their swimwear and cover ups. Despite the busyness of the restaurant we were able to secure a table relatively easily by a window with a glorious view of the open sea.

We had also dressed in our swim wear prior to heading up to Cabanas so we went out onto the pool deck right after breakfast. Unfortunately the mid April weather was just a little on the cool side (78 degrees) and the overcast skies were causing intermittent, drizzly rain. We decided to put off our swim time for another day but there were many families enjoying themselves in the pool and watching Finding Nemo on the huge jumbo movie screen (aka Funnel Vision). 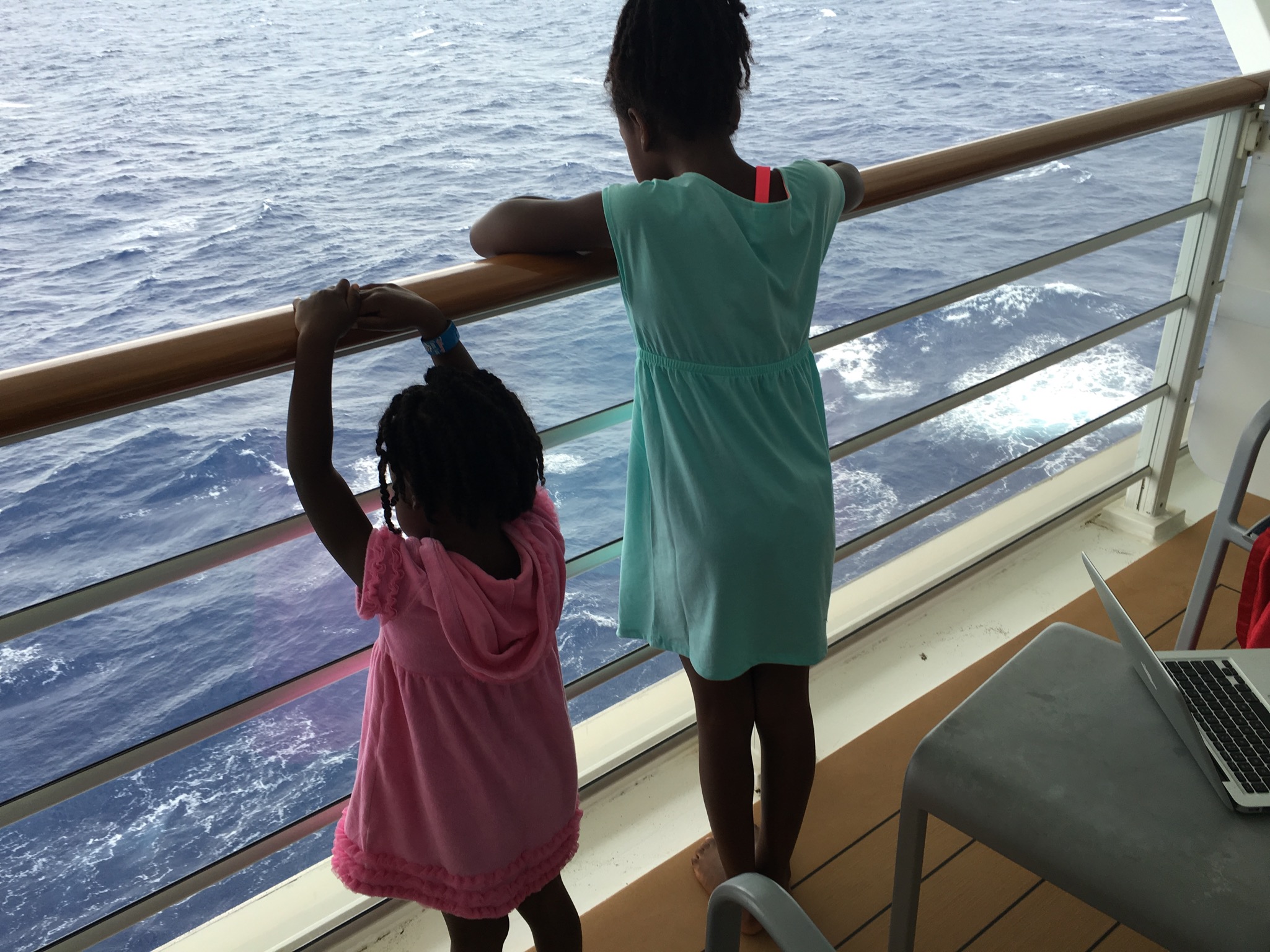 The girls, looking out over our stateroom’s balcony at the overcast skies

After breakfast we returned to our stateroom for some relaxation. I got to work on my laptop doing some writing on our private verandah with hubby while the girls crawled back in bed and watched Peter Pan via the On Demand channel. One thing I love about Disney cruises is that their On Demand channel features the majority of their animated, Pixar and live action movies for FREE!! There is even a selection of recently released live action films to choose from (the recent Marvel Comics movies like Iron Man 3, Captain America and Avengers were a particular treat for us grown ups)

When Peter Pan was over we dropped the girls off at the Oceaneer Club to have lunch with their friends and Hubby and I went back to Cabanas for a quick, light lunch. 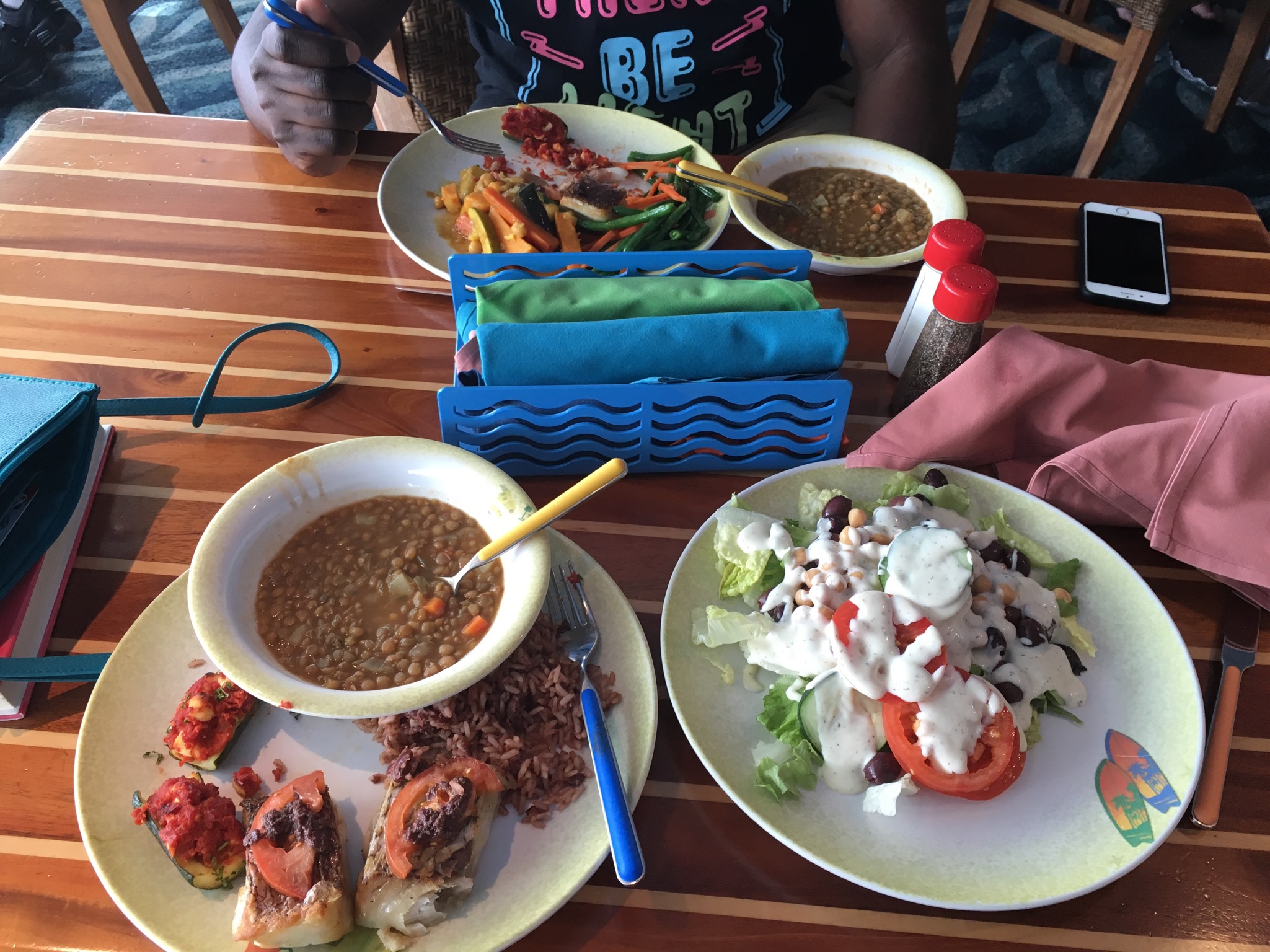 The lunch options at Cabana pleasantly surprised us! This Moroccan Lentil soup was phenomenal….

During our walk post-lunch on the deck 4 running track our Wave phone pinged us with a message that our youngest daughter wanted to be picked up. Disappointed that our kid-free leisure time was cut short, I left Hubby to continue his stroll and I went to pick her up.

I let Hubby have some time to himself, keeping Jasmine entertained in our stateroom for a little while. At 2pm there was a comedy-ventriloquism show in the Walt Disney Theater and all three of us made our way in that direction. We loved the show by the talented Lynn Trefzger; she was hilarious and kept the parents and kids entertained the entire time with plenty of audience participation. 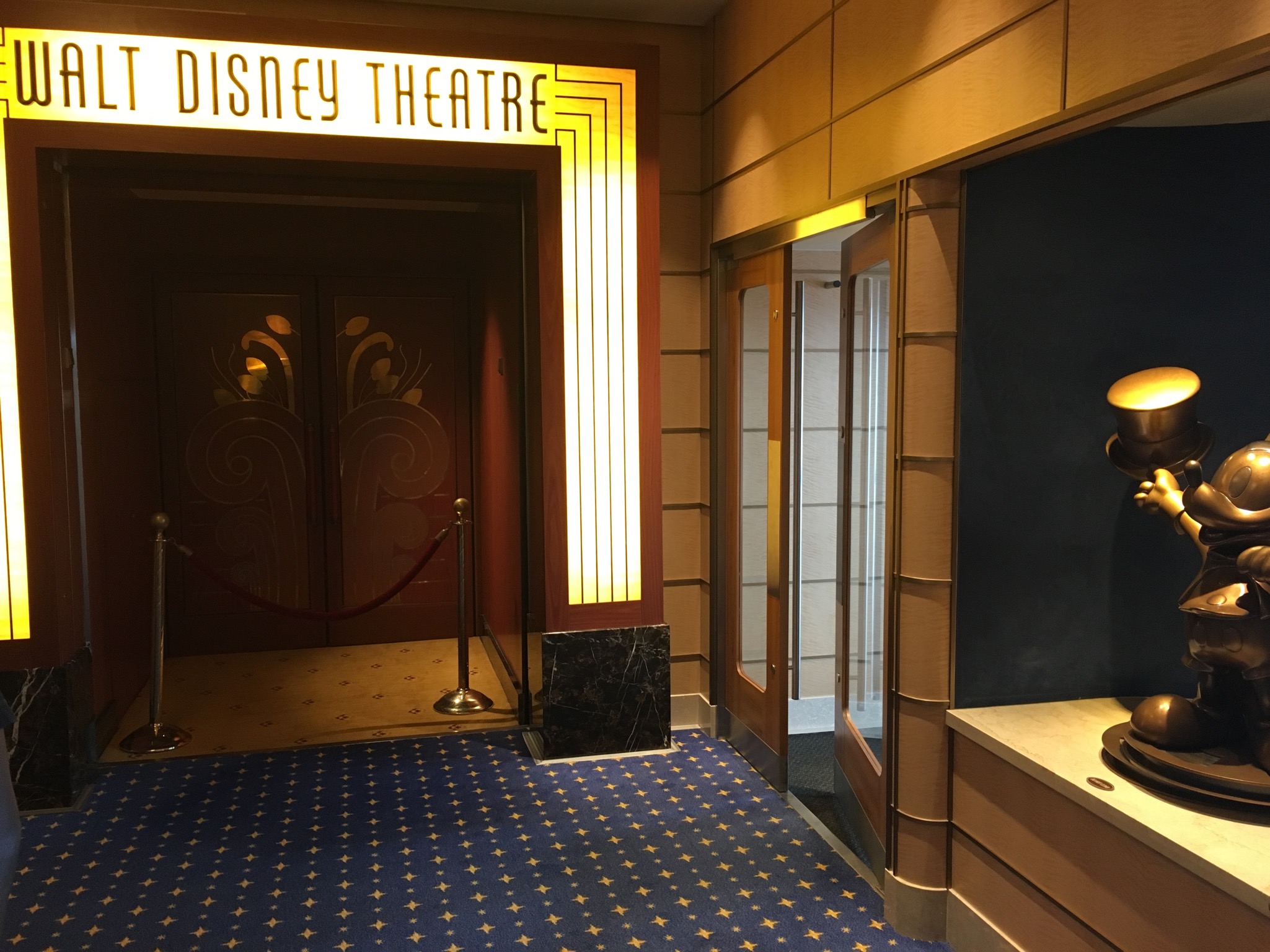 The classy entrance to the Walt Disney Theatre

The rest of the afternoon was spent wandering the ship and just relaxing. At dinner time we attempted to pick up our oldest daughter but she begged to stay at the club with her pals for “just a bit longer”. Dinner is served in the Oceaneer Club most evenings (free of cost!) and she was already enjoying a healthy plate of mac and cheese and steamed veggies when I arrived. I kissed her and told her we’d be back after dinner and barely got a good bye as she was already engrossed in conversation with her buddies. 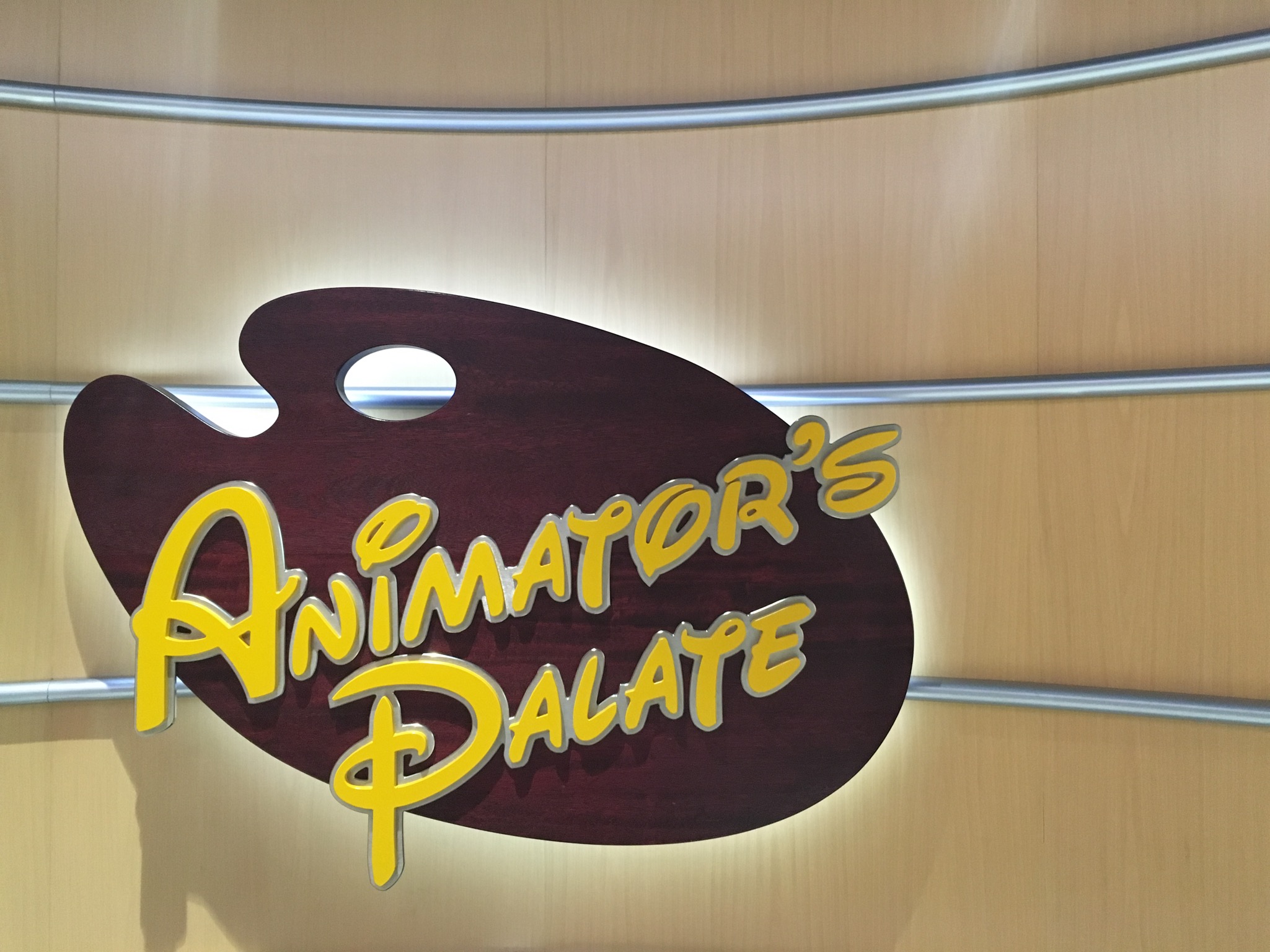 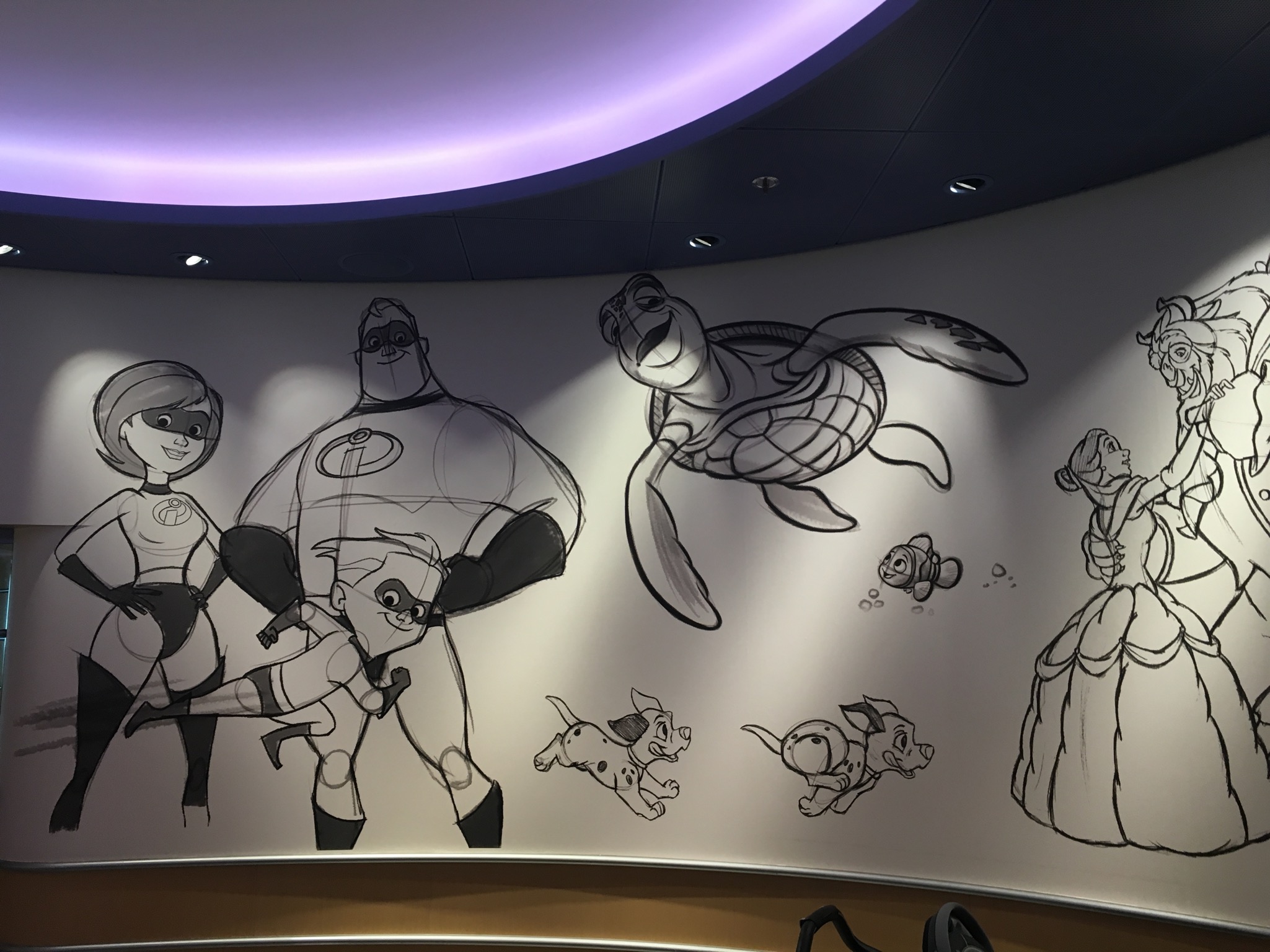 I love the wall decor at the entrance to Animator’s Palate!

Dinner tonight was in the Animator’s Palate, one of our favorites. The artistic, black and white décor changes as the evening goes on and tonight the decor  was based on the Finding Nemo theme with appearances from Crush and the whole gang on the live screens throughout the dining hall. Even the lighting changed to simulate an underwater experience! 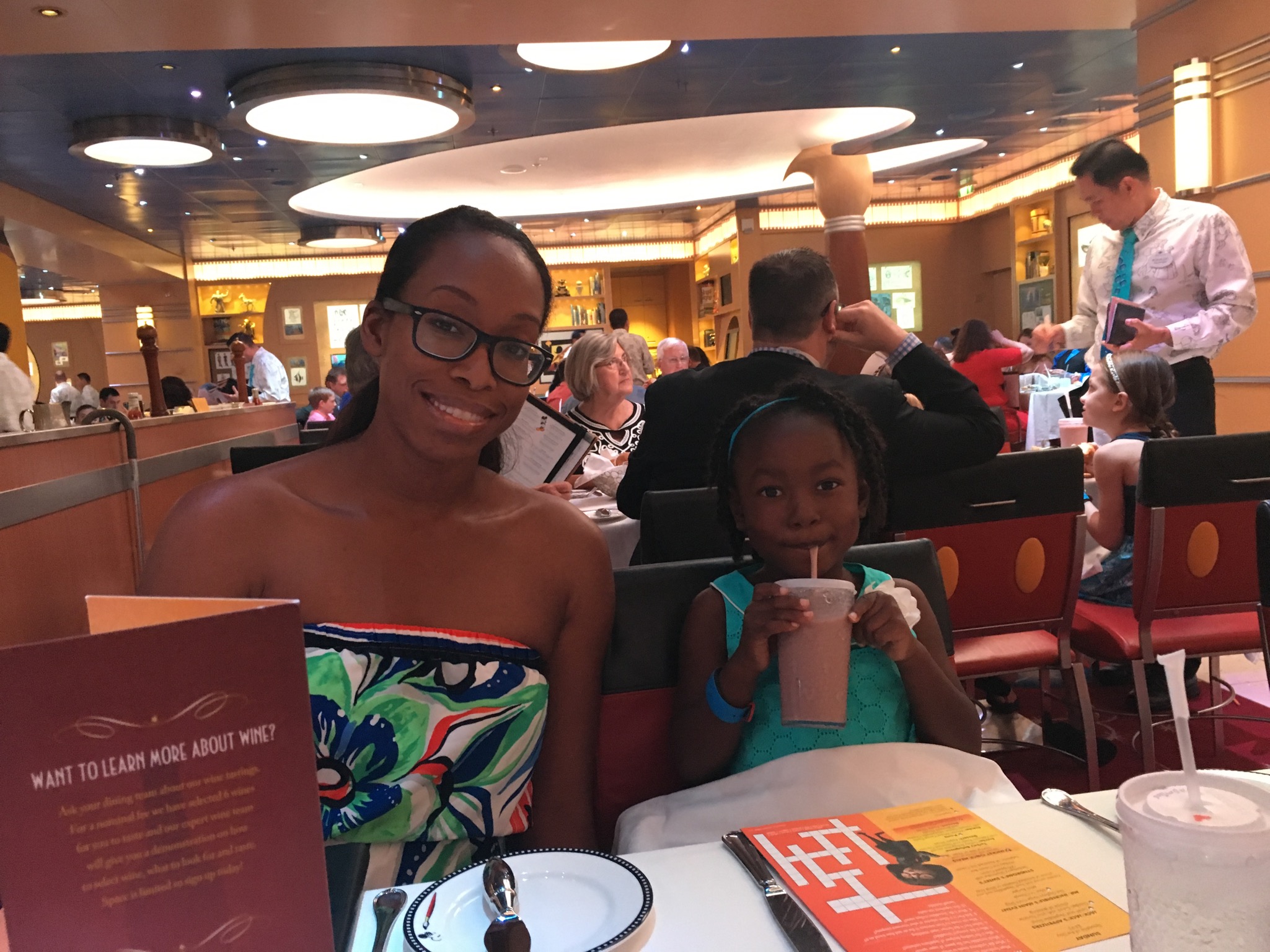 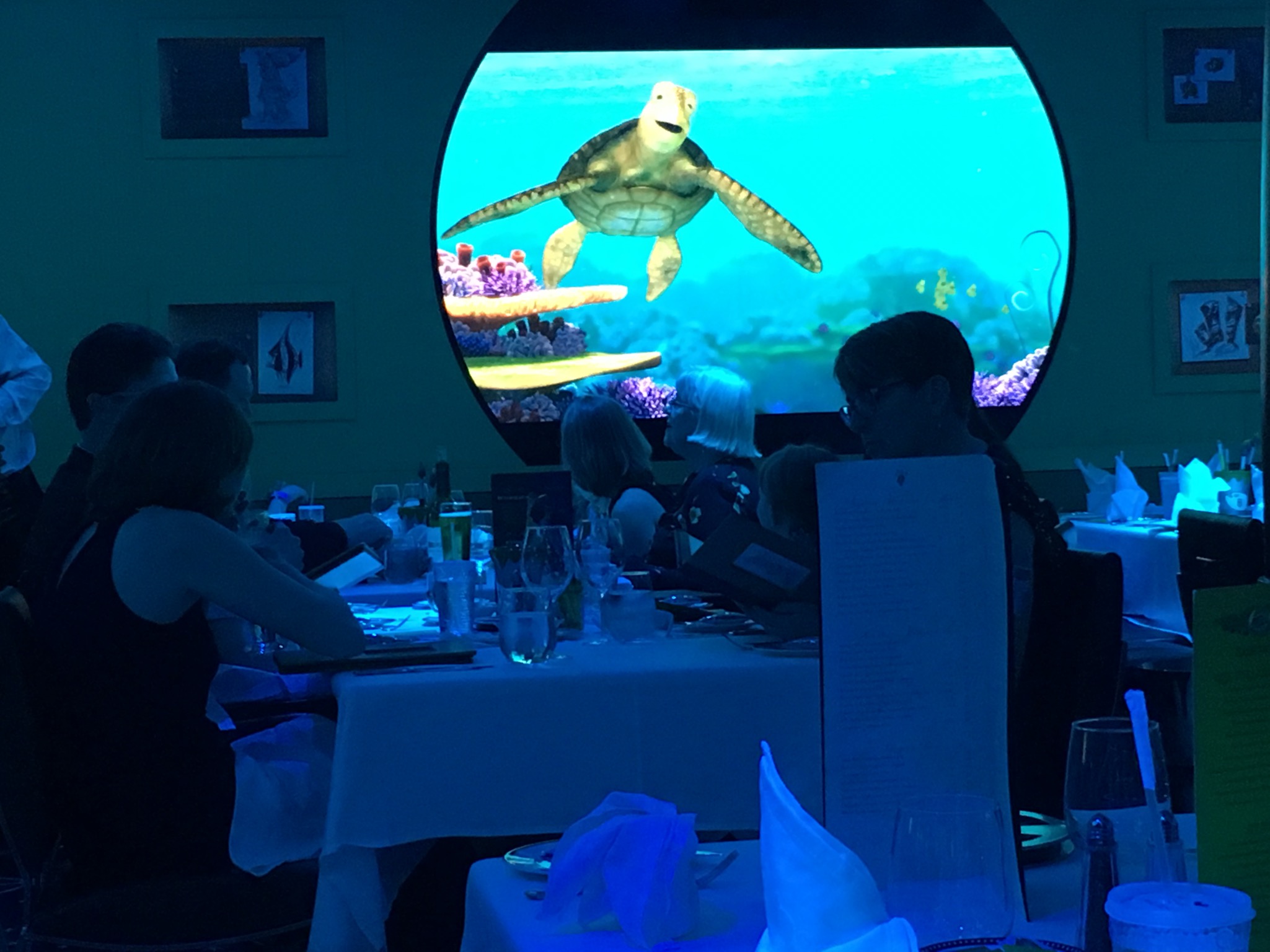 Crush made his appearance on the screens a few times throughout the meal and interacted with guests.

After dinner, Hubby returned to our stateroom for a quick nap; Jas and I went down to the Oceaneer Lab which was hosting Open House hours. We picked up Jordan from the Club and joined a group of families for the Anyone Can Cook session. 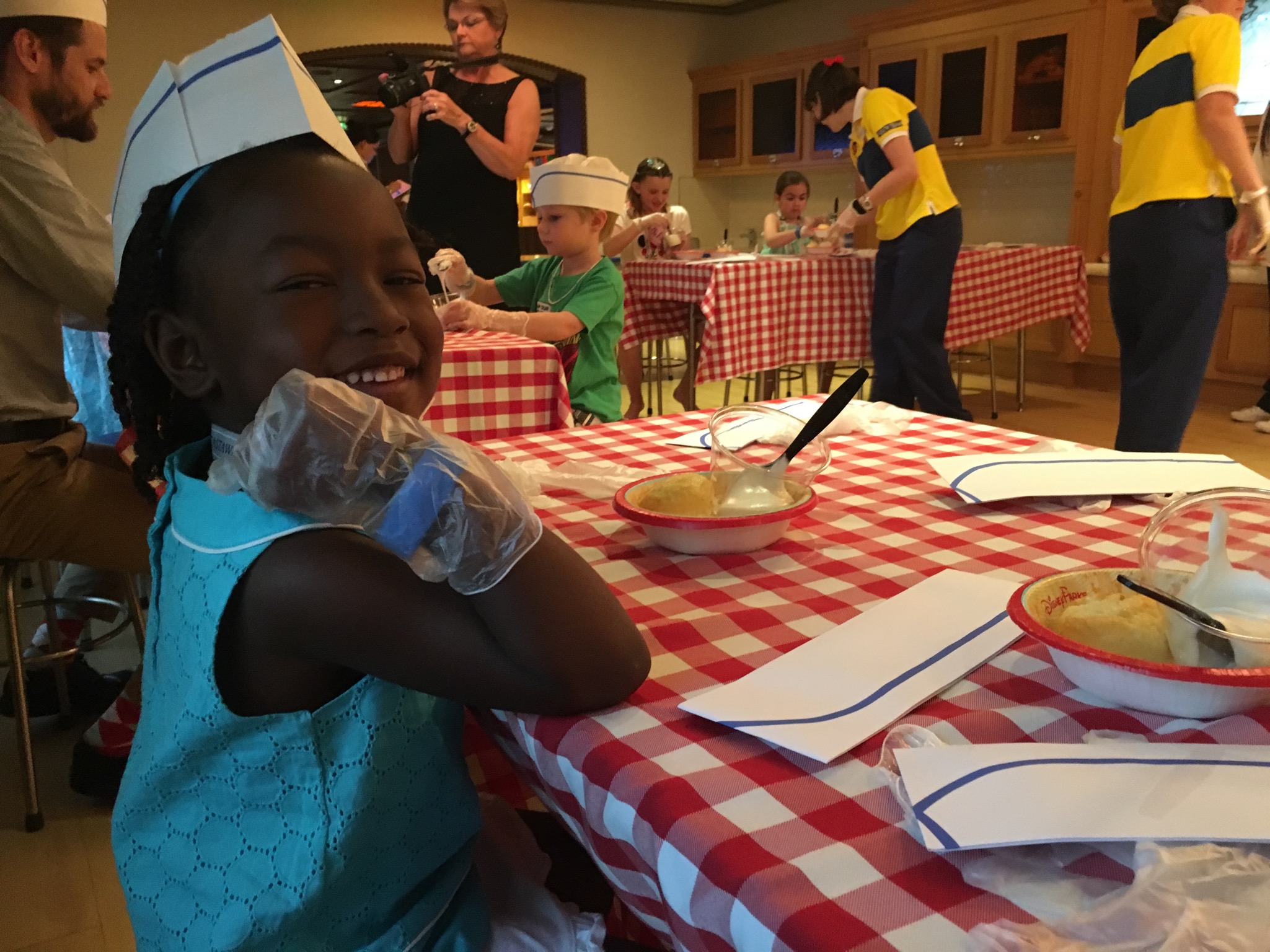 Anyone Can Cook sessions are often held in the Oceaneer Club/Lab during open house hours allowing the whole family an opportunity to enjoy the food creation activity together.  Among the options available this cruise were ravioli and strudel!  This evening we had a chef from Ratatouille guide us in the art of cupcake decoration. It was too cute and a lot of fun for everyone (of course the cupcakes were yummy too). 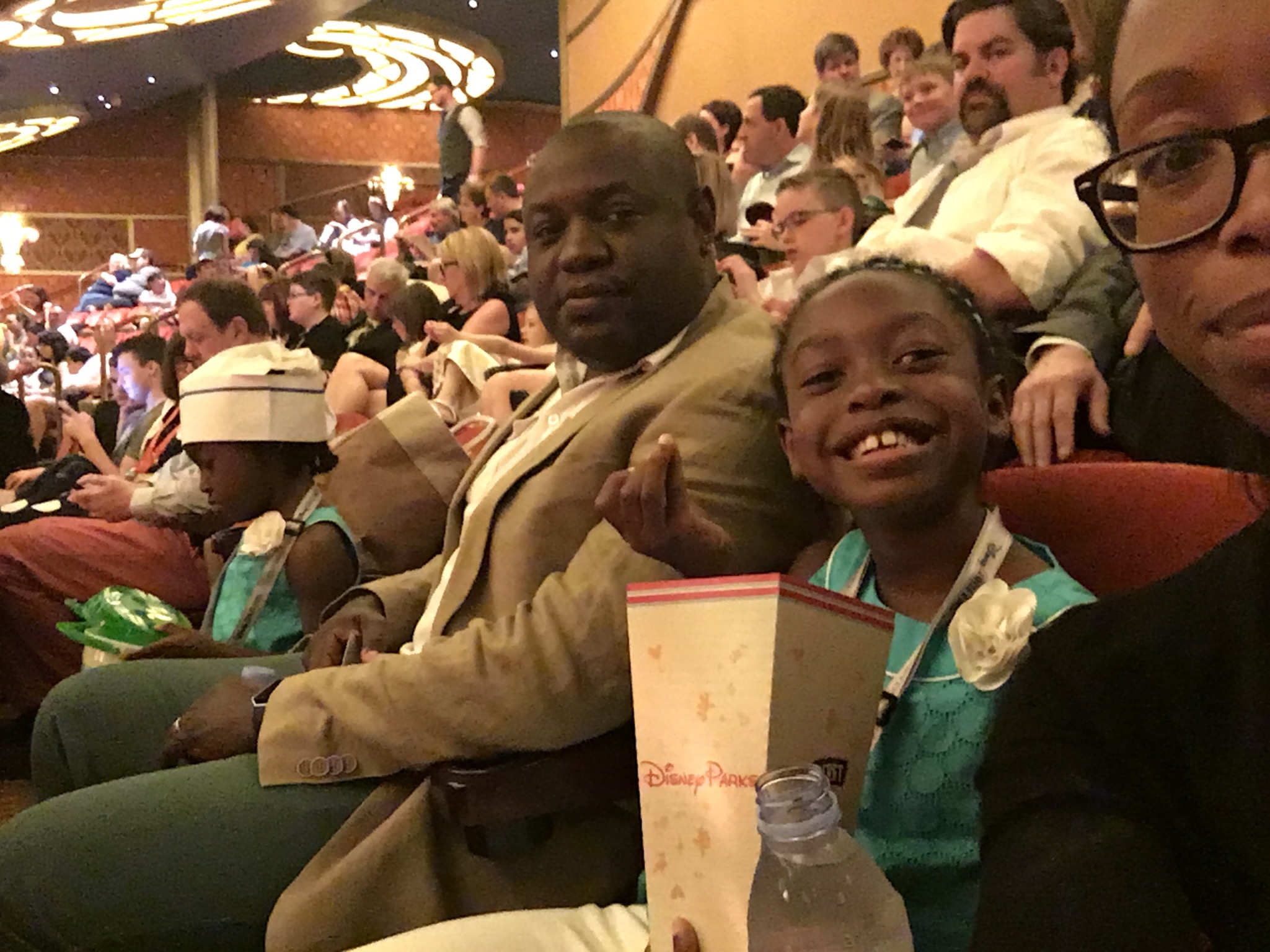 After the session we went directly to the Walt Disney Theatre for the evening production of Aladdin the Musical! Hubby joined us and we were able to snag great seats in the front row of the balcony. The show was very well done and the kids were mesmerized the entire time. I was truly impressed at the quality of the show; the singers, staging and production were impeccable.  Somehow our youngest had never seen the movie that made her name famous and she fell in love with Princess Jasmine. 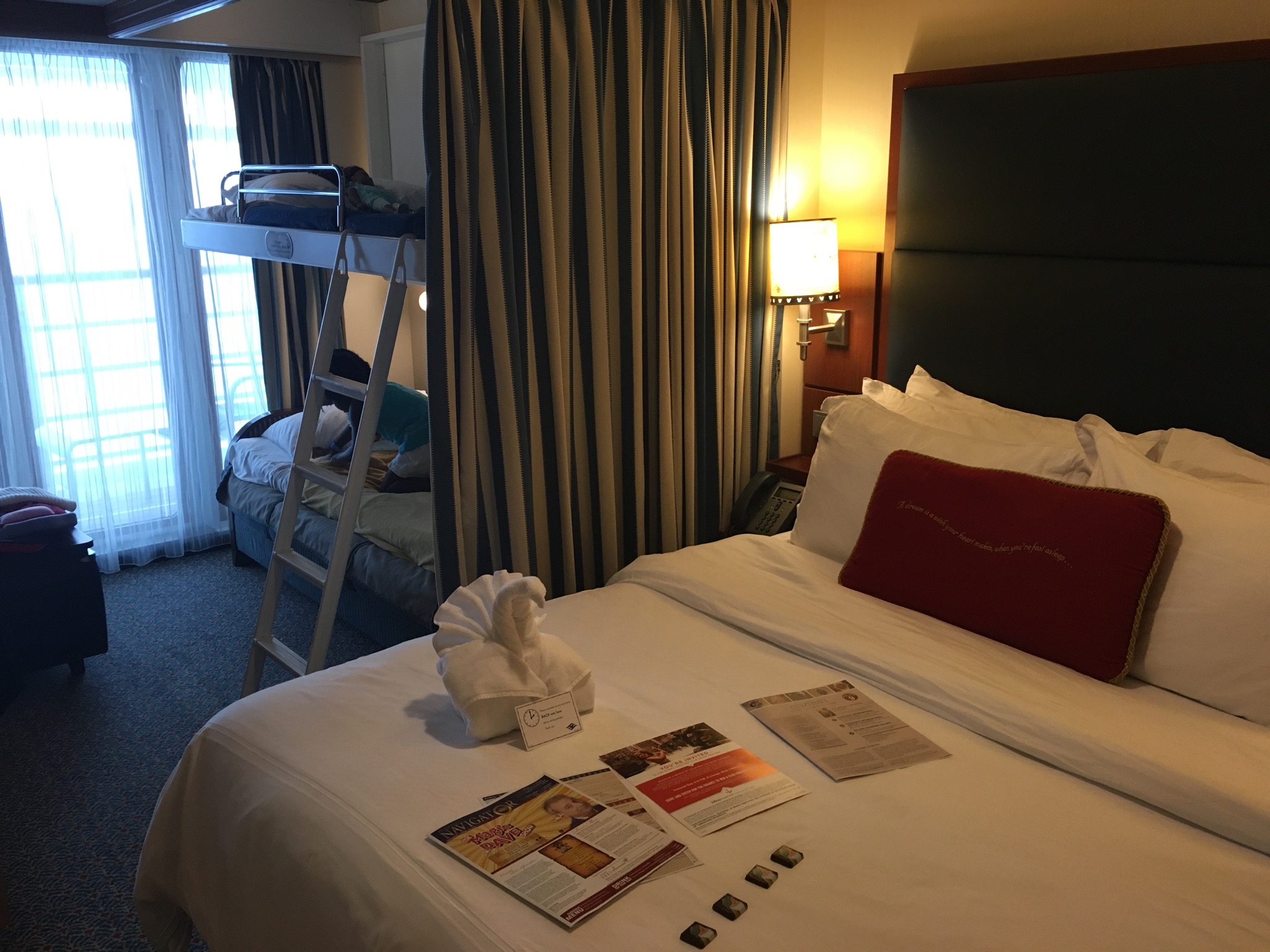 After the show we headed back to our room and quickly settled down for bed. The kids were exhausted from their first fun filled day on the Fantasy and the parents were happy to finally shut down for the night.

I love sea days on cruises because they allow you a chance to just chill and do everything on the ship or nothing at all, depending on what you’re in the mood for!

When you’re on a cruise ship (or if you’re waiting in anticipation of your upcoming cruise vacation) what are would be your ideal plans for your day at sea?