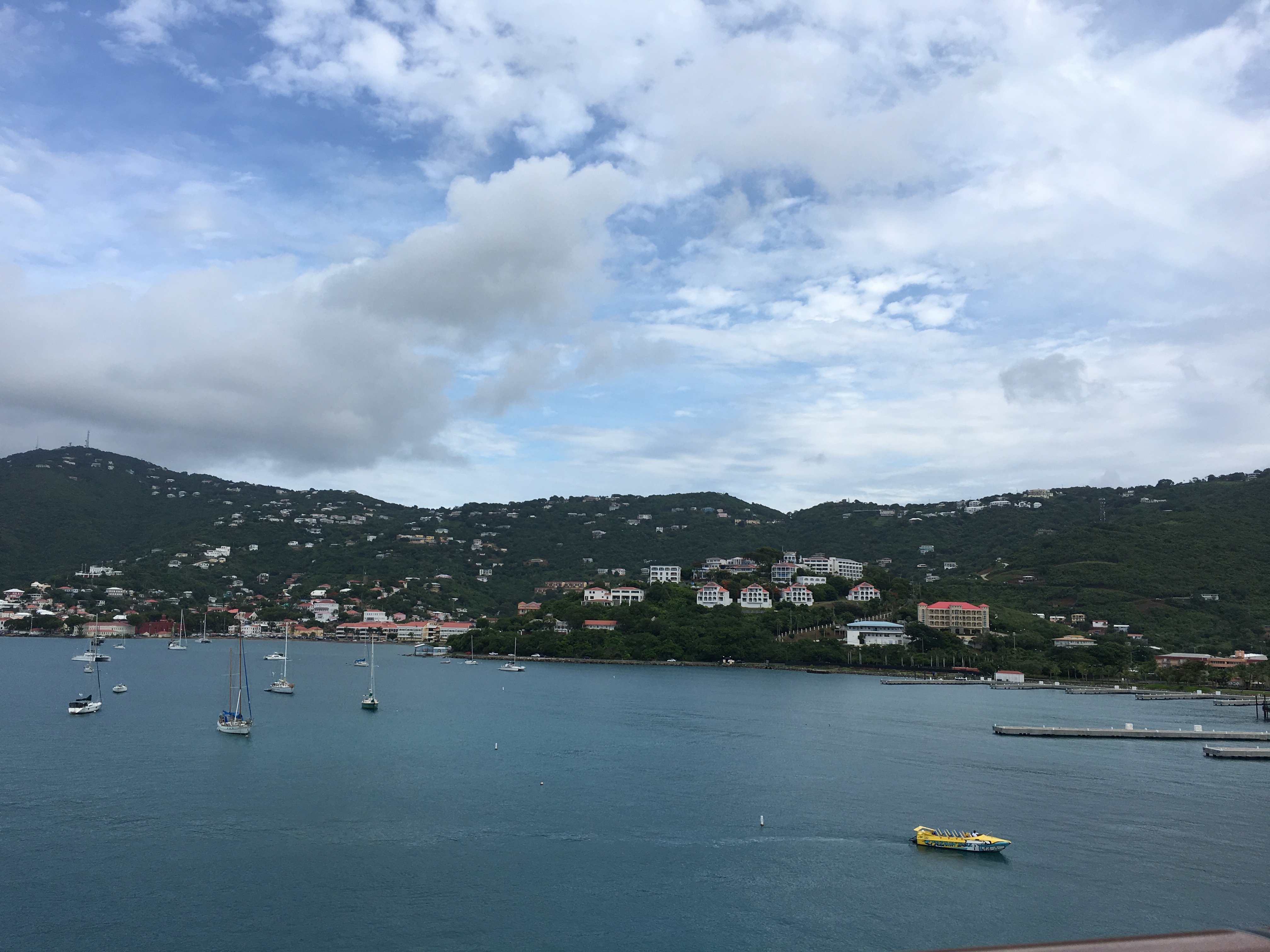 Norwegian Escape is an awesome ship for families and we were able to sail to the Eastern Caribbean with the kids in the fall of 2016.  The first two days onboard were sea days and we thoroughly enjoyed our time exploring the ship and even found opportunities to complete school work (homeschool travels FTW!!).

Our 4th day on the Norwegian Escape we were docked on St. Thomas and the day began for us around 8:30 am. The ship docked at 8am and would be in port until 6pm. We wanted to spend a day at the beach but needed to get schoolwork and breakfast out of the way. 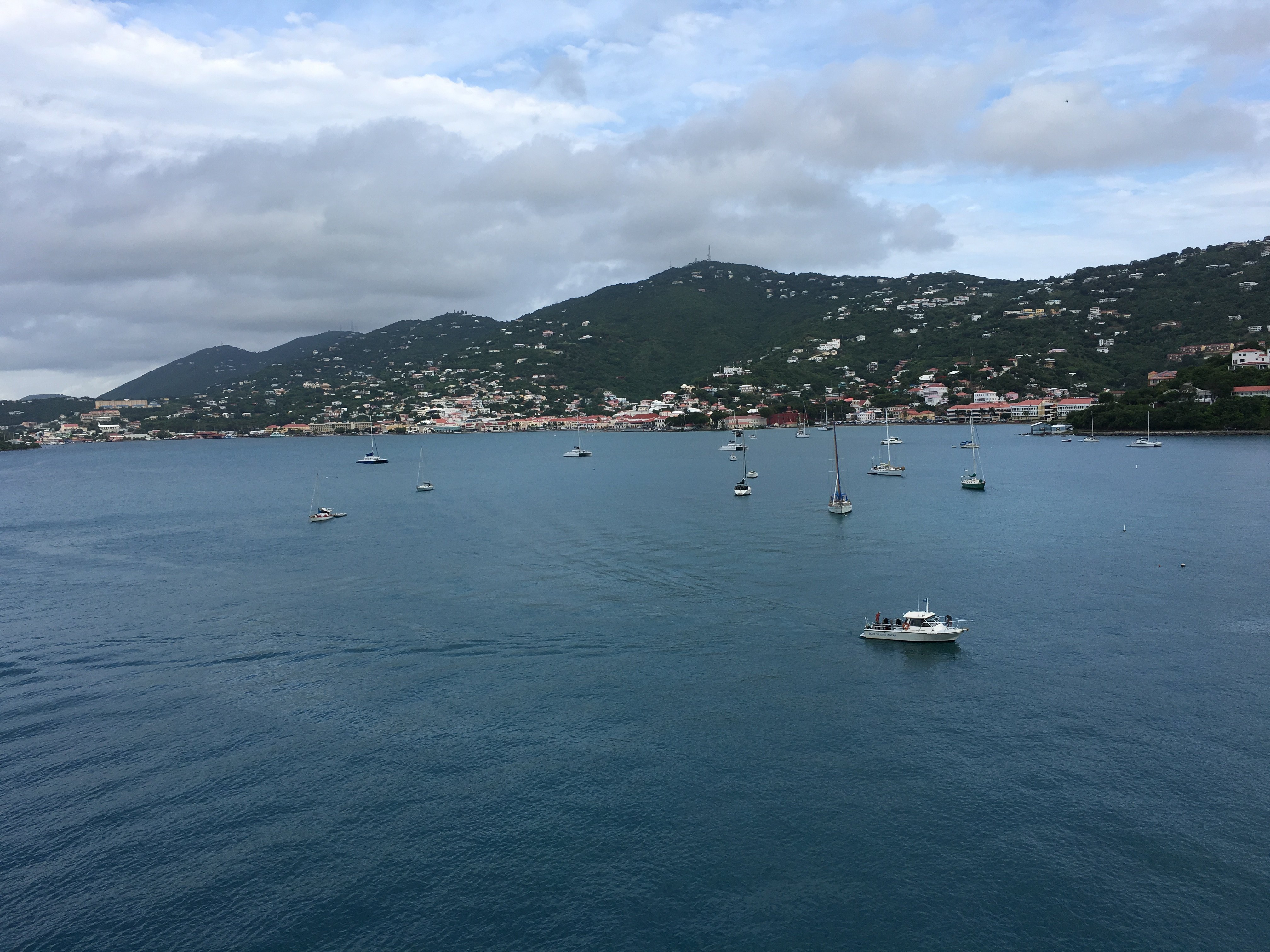 We spent some time in our favorite breakfast spot in the Garden Café. The vistas of St Thomas were breathtaking, even with the slightly overcast skies. 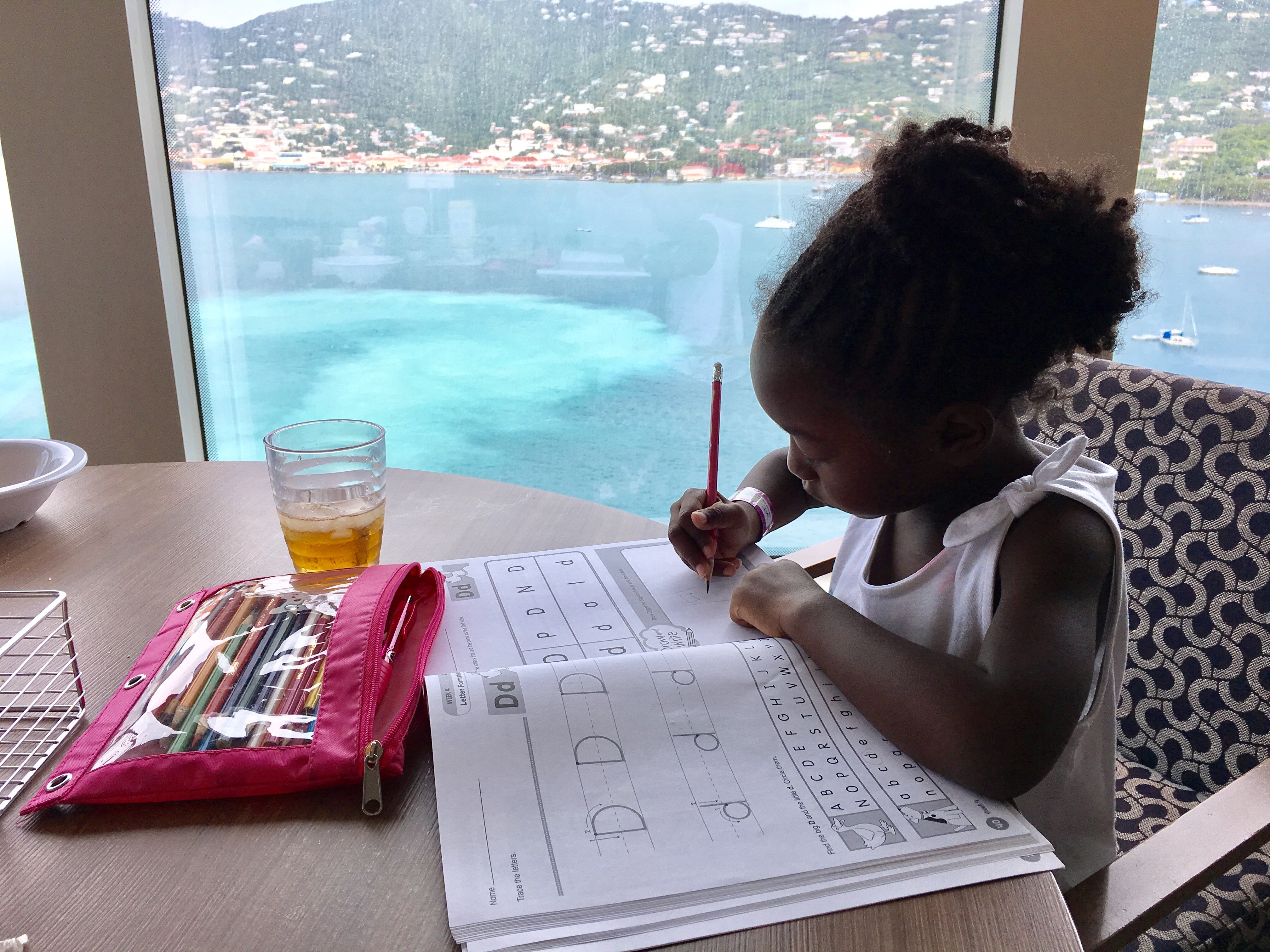 After a hearty breakfast and burning through the day’s homeschool assignments we returned to our room and prepared to leave the ship. 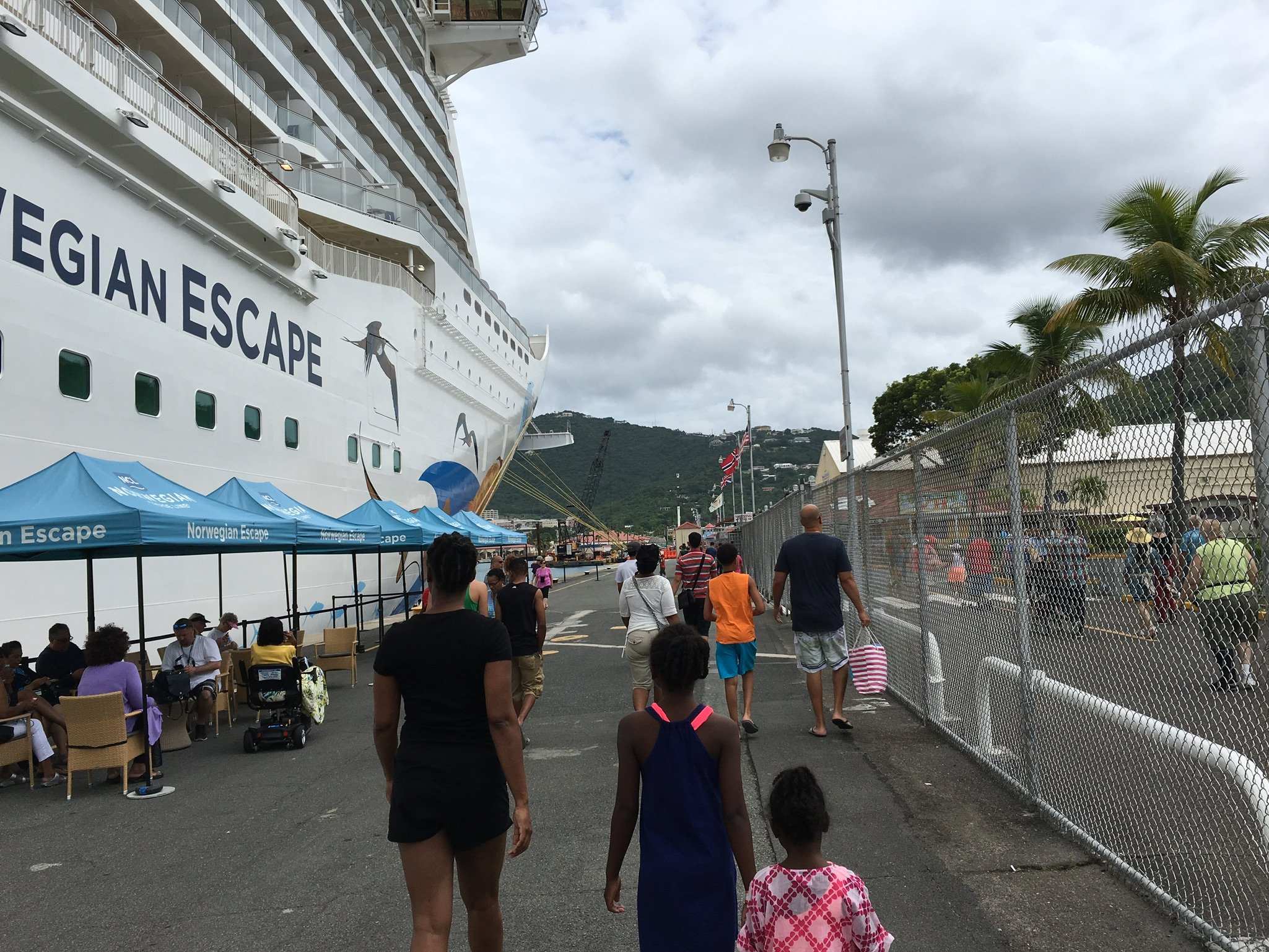 We disembarked around 11:30 am. The port was busy with cruisers as there was a Carnival Cruise ship in port with us. 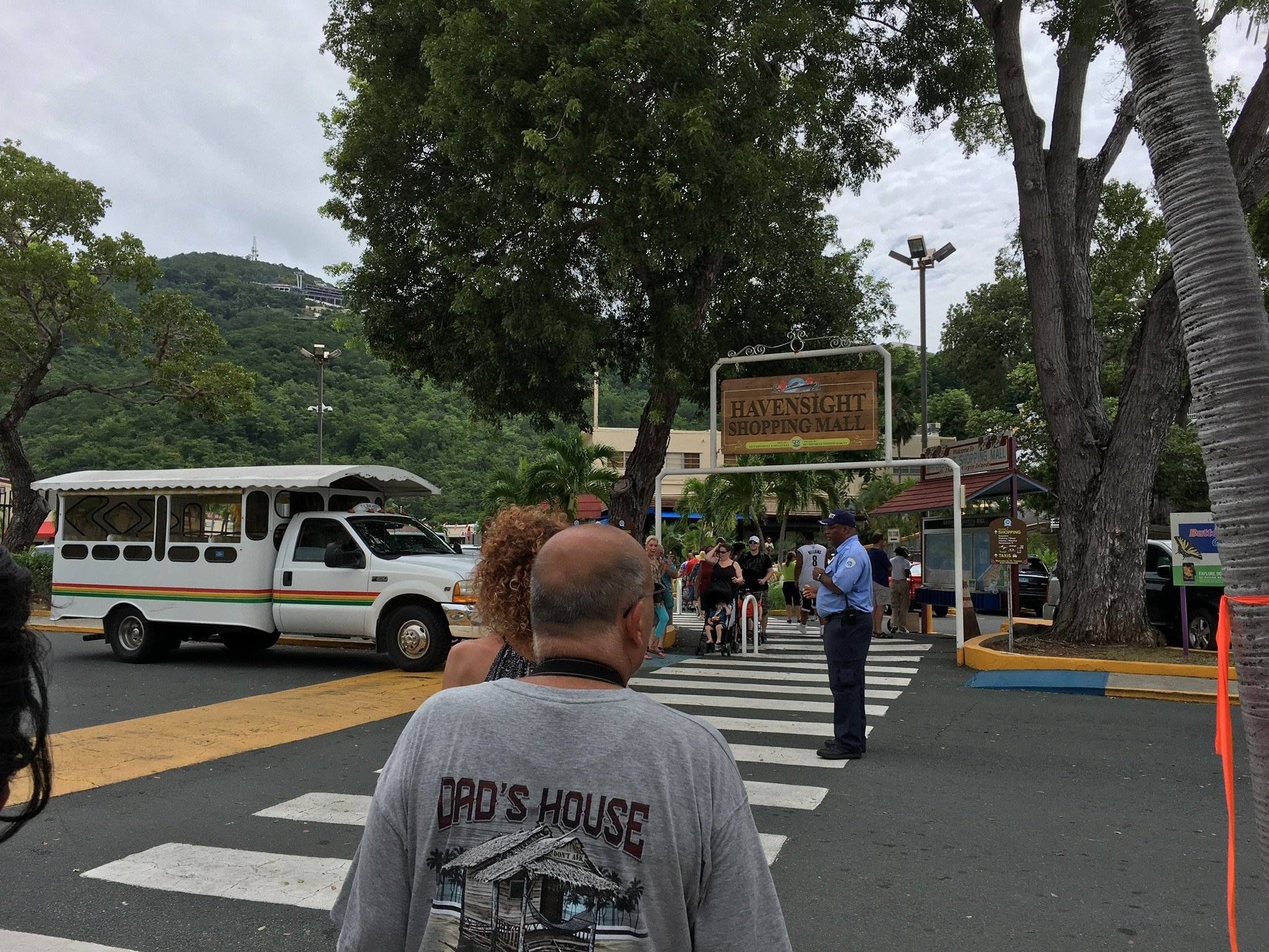 We walked through the outdoor mall across from the port and caught ride on an open air bus collecting several passengers with multiple destinations. The taxi driver charged $10 per person but kindly let my youngest ride for free. 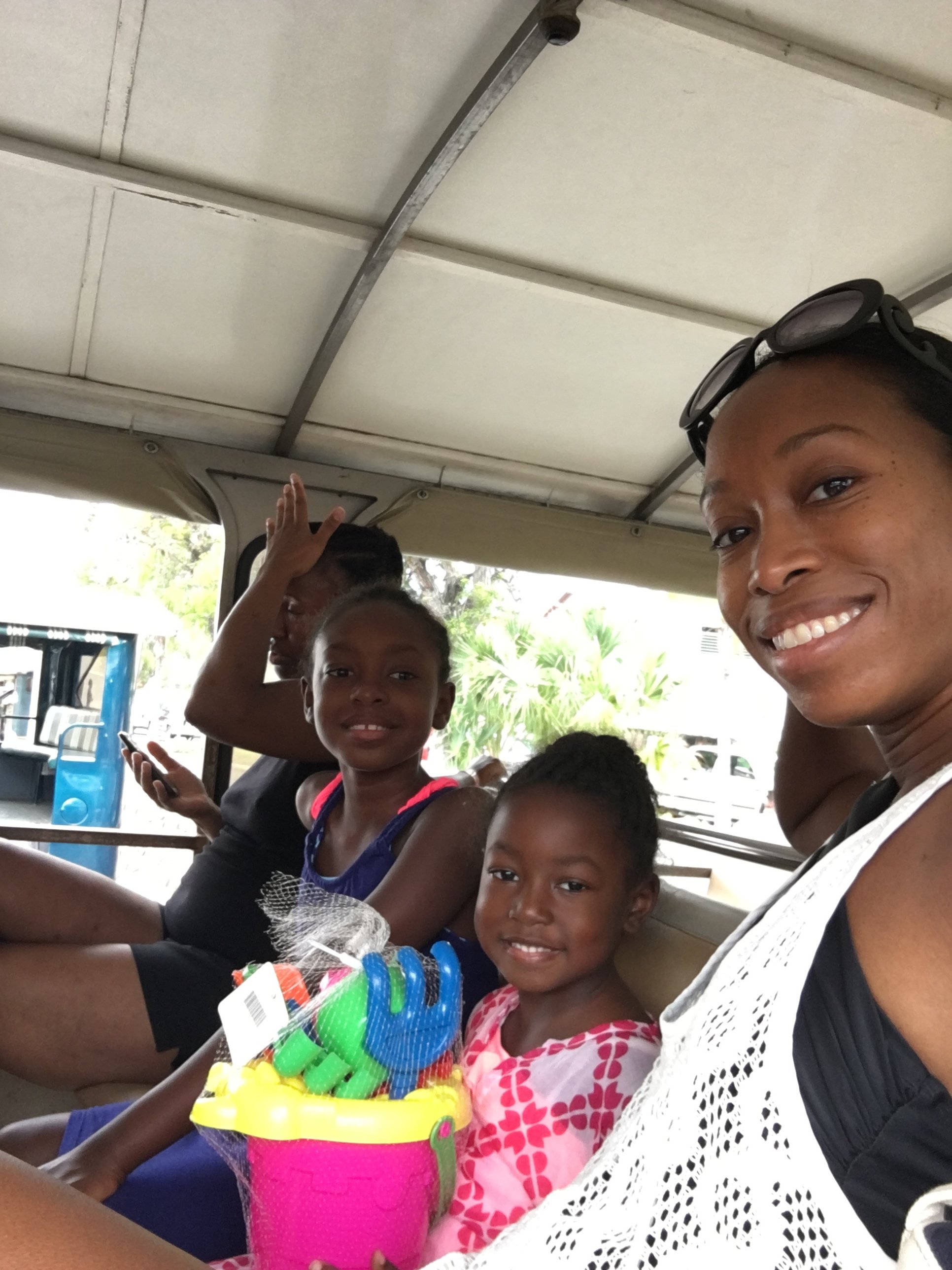 St. Thomas is known for flawless beaches and there were many to choose from. We decided not to visit the popular Magen’s Bay and Coki Beach, instead opting to try out Sapphire beach.

After a colorful 20 minute ride up through winding mountain roads we descended on the Sapphire Beach Resort complex. The grounds were run down in appearance near the entrance; the deserted tennis courts and unkempt grounds were a bit of an eyesore. There was a large modern billboard that stated that the resort was pending redesign and refurbishment.

The taxi left us in a rocky parking lot where several other taxis were waiting, the drivers lounging and chatting under a large tree. At least we knew we wouldn’t have to worry about finding a ride back to the port. 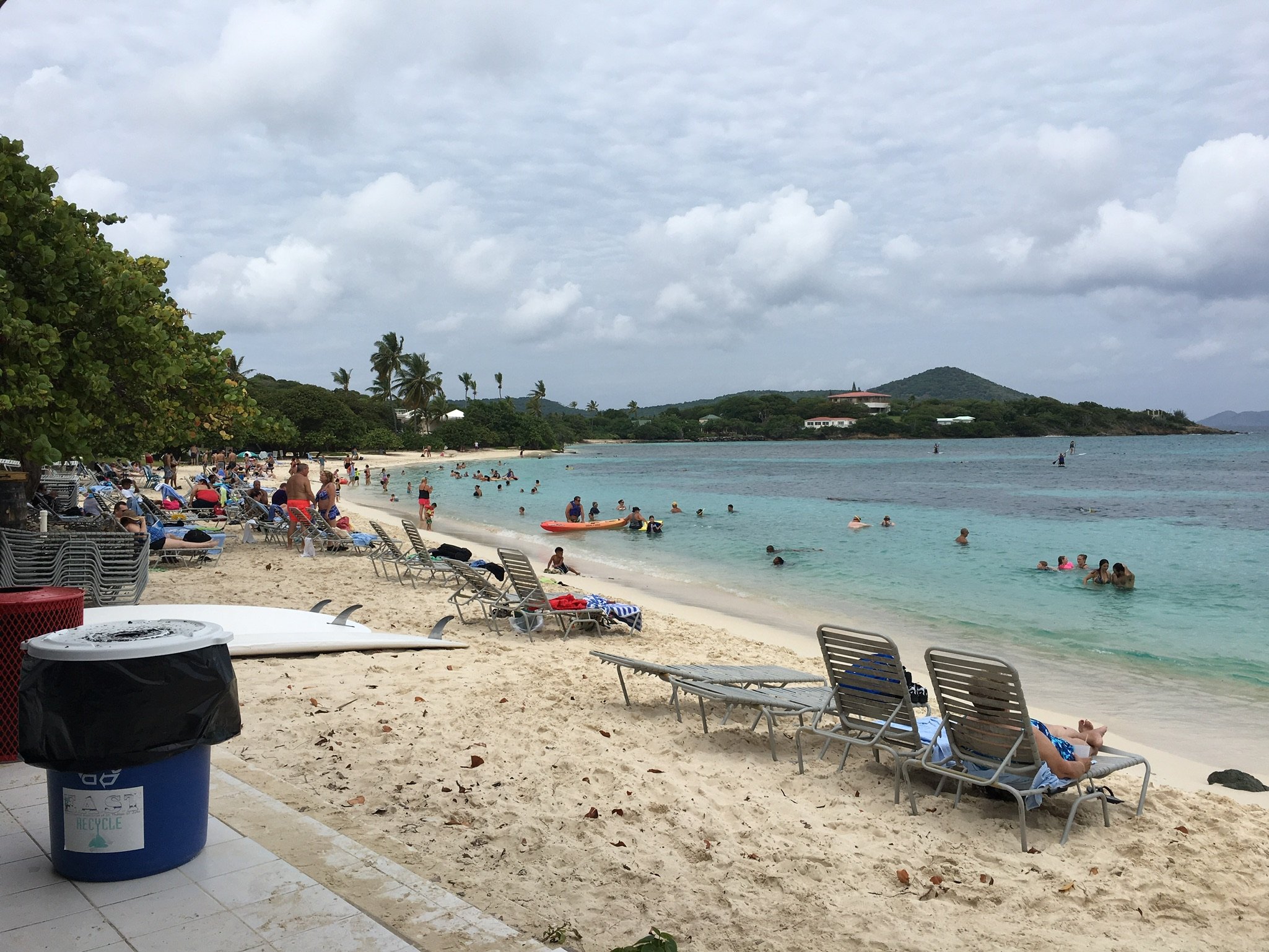 We followed a washed out wooden sign with an arrow that directed us to the beach through a pathway between the villas. The beach appeared and it was as lovely as the pictures I’d seen online. There were sea grape trees along the beach providing shade to the visitors. We walked up to the Rental booth and rented beach chairs for $9 a piece. One of the staff members helped us move our rented chairs to a comfortable spot close enough to the water but still well under the shade of the trees. 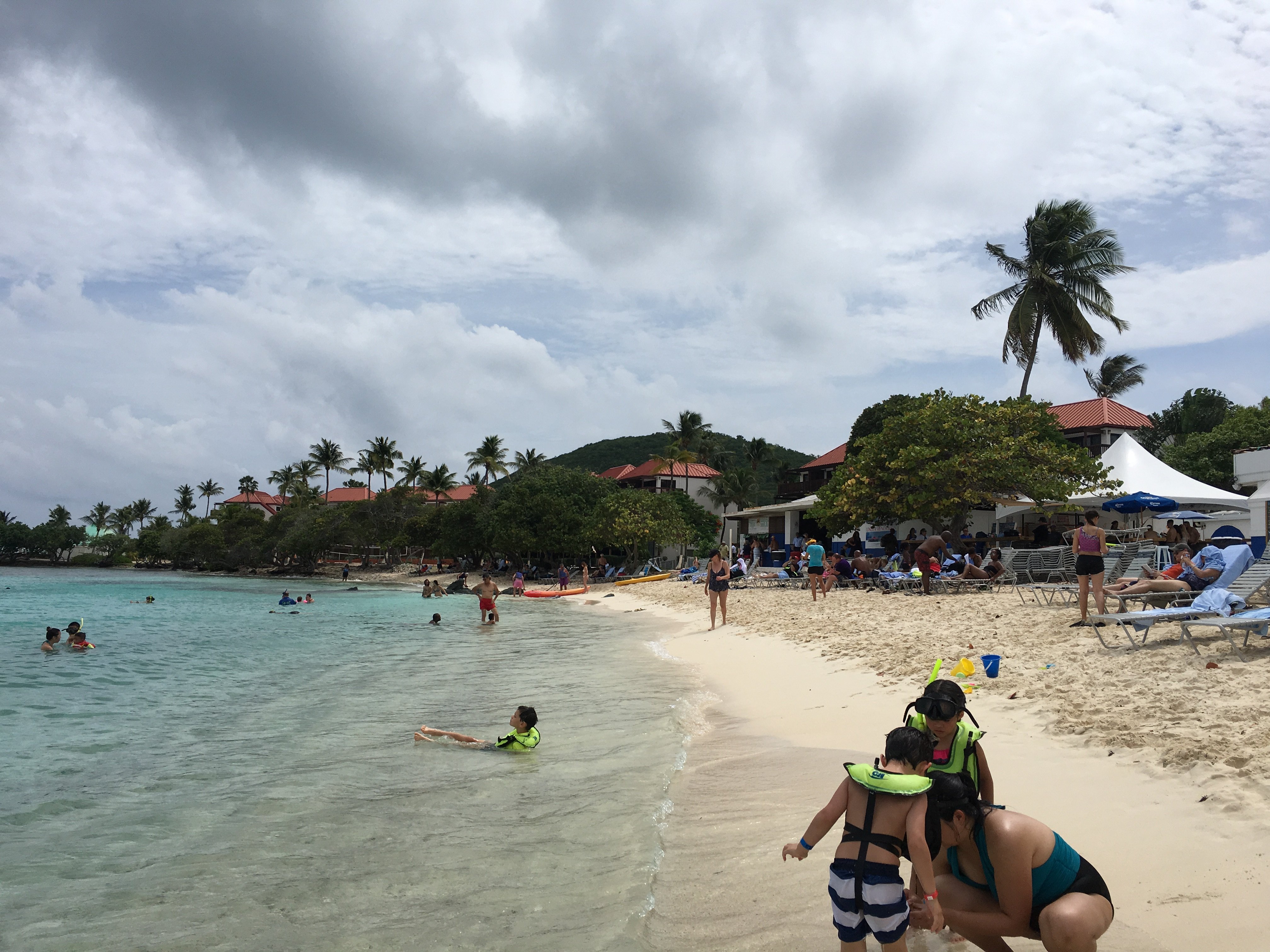 When we were walking through the mall at the port we stopped to pick up a small beach toy kit and some bottled water. These came in handy as the kids immediately sat down in the sand and started to play while my travel buddy, Iris, and I dropped down onto the loungers and rested with cool water to drink.

We had arrived around lunchtime so the beach was quite busy. Nonetheless, the atmosphere was mostly family friendly and the beach was quite clean. The water was clear and cool with great visibility for snorkeling. Toward the left side of the beach the sand was softer; to the right the snorkeling was better but, as to be expected, the sea bed was rockier. 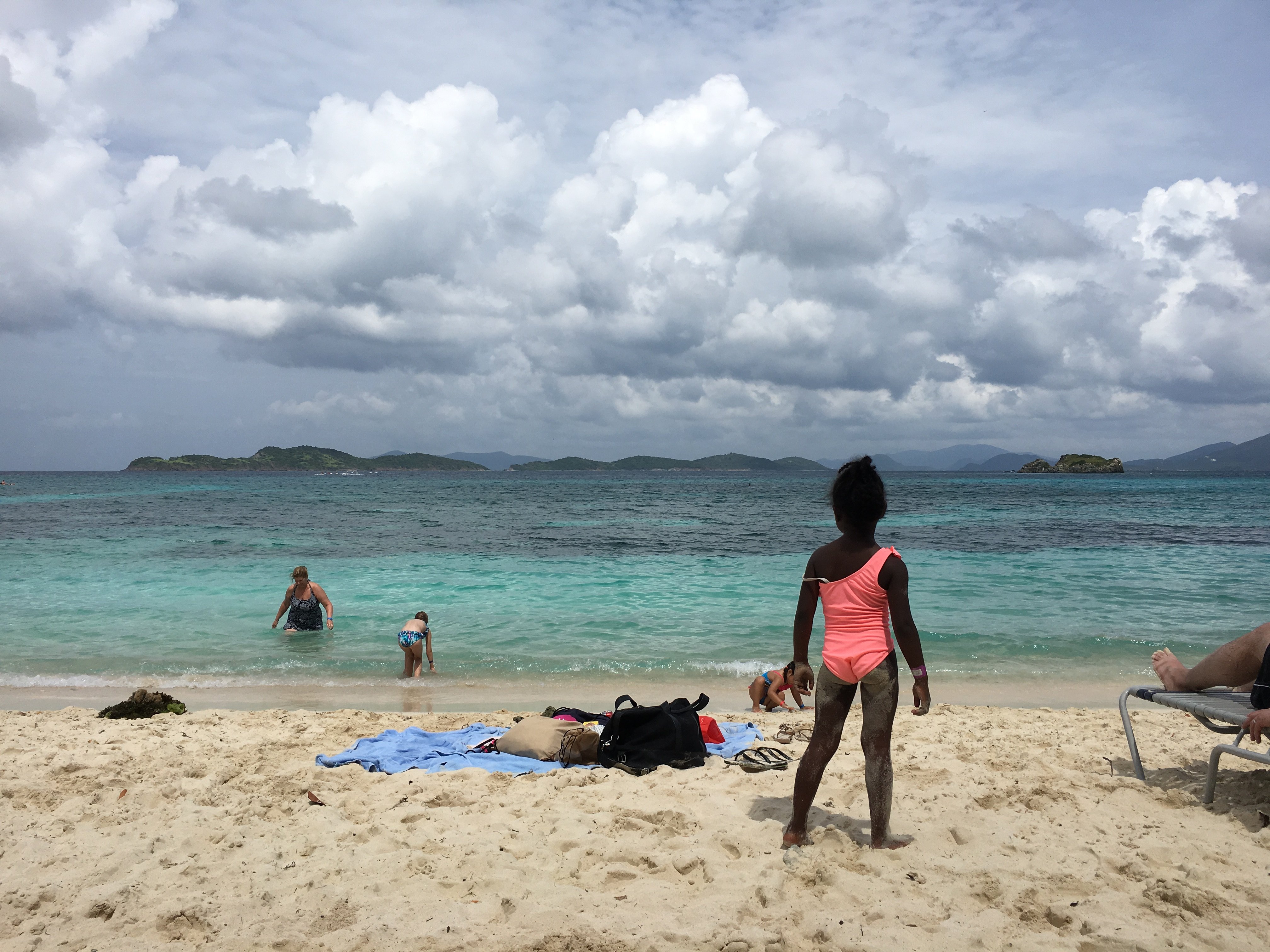 We spent a few hours just relaxing on the beach and swimming near the shore. There was one vendor who was working the beach but otherwise we weren’t bothered at all. The beach bar and grill was popular and there were servers walking up and down the beach taking and filling orders. We had packed apple sauce and dry cereal (from the buffet) as a snack for the kids but that didn’t hold them completely so we ordered lunch from the grill. The Mahi Mahi sandwiches were okay and they filled our tummies but they weren’t exceptionally good. 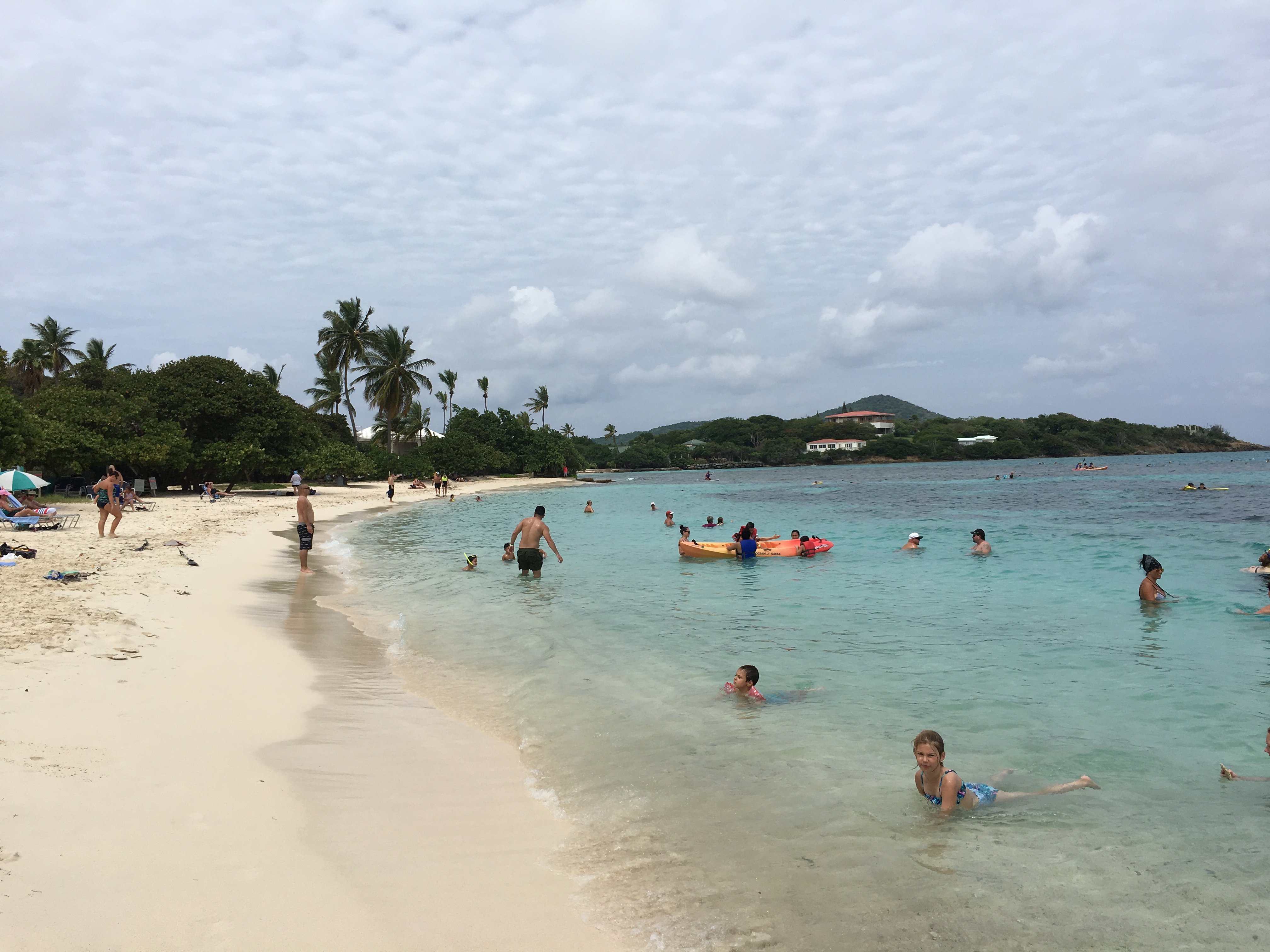 Around 3pm heavier clouds moved in and we felt we were ready to head back. We climbed into one of the waiting taxis in the parking lot and shortly after we started our journey back to the port the rain began to fall.

It was raining steadily but lightly as we returned to the ship. There were tents set up next to the ship entrance where we could exchange our wet towels for clean dry ones. Staff members there also offered water and cool towels which were refreshing.

Back on board we rested in our stateroom after showering and cleaning up. The girls and I had FaceTime with hubby who was missing us dearly (since we were in the US VI we had cell coverage through our provider AT& T). 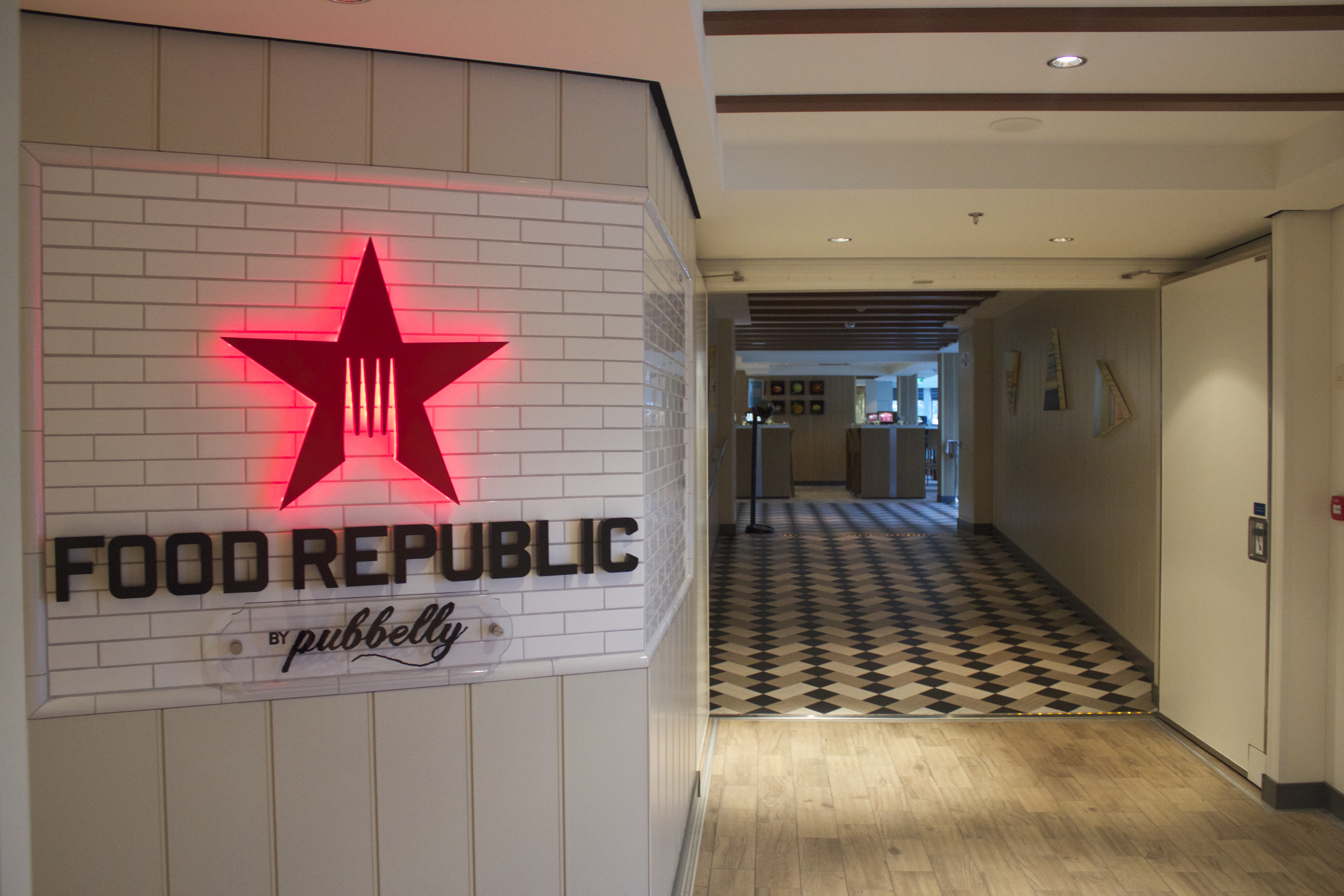 For dinner we decided to visit Food Republic and had an eclectic and flawless meal while watching the ship leave port.  I’m going to have to write a separate post about our incredible experience at Food Republic because it was, by far, one of the most delightful and memorable experiences of our cruise. 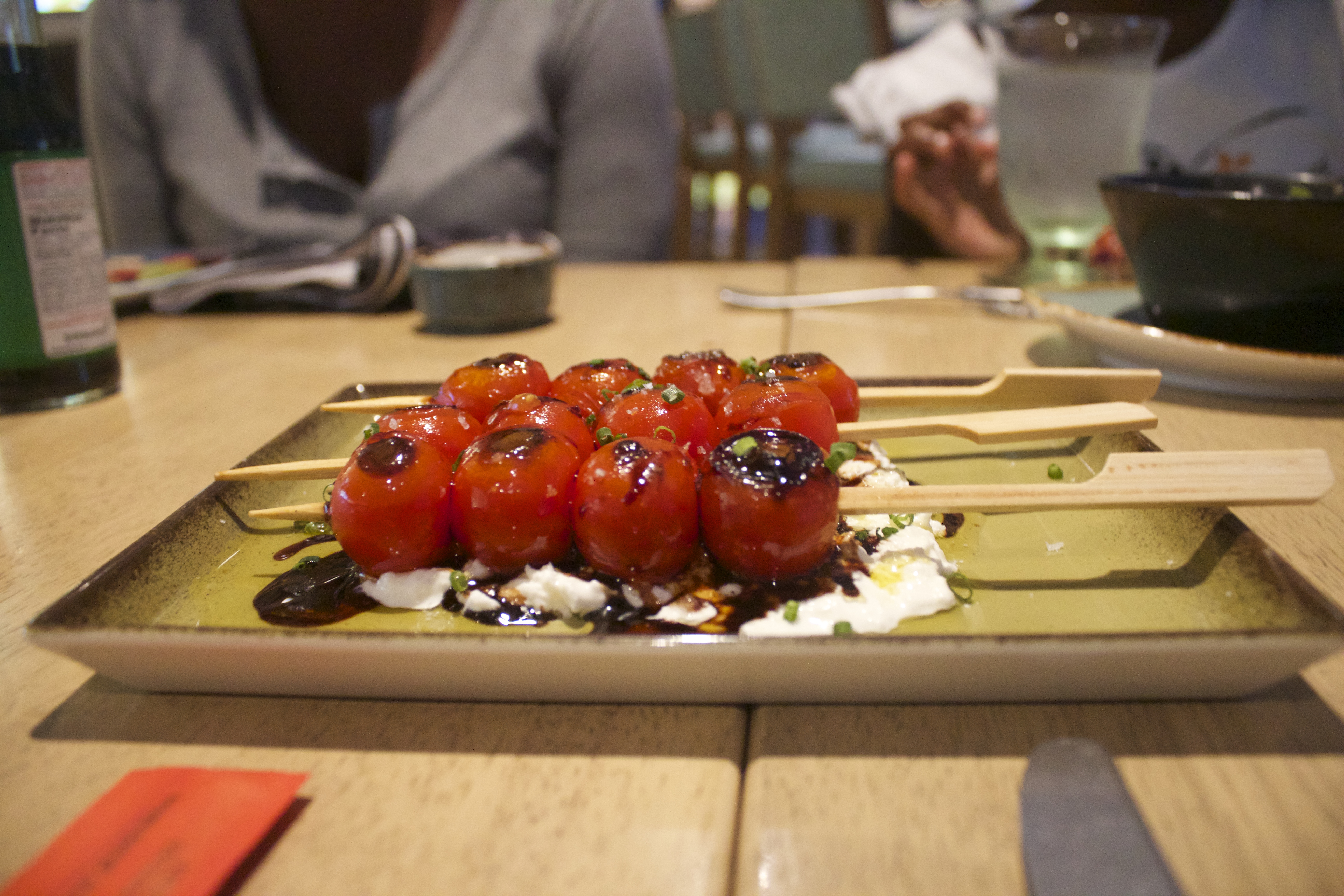 Roasted tomatoes and burrata with balsamic vinegar and rosemary

The food at this gourmet bistro is absolutely phenomenal, served in tapas style.  My girls got a kick of ordering from the tablets on each table.  The service staff were great and we all had a blast. 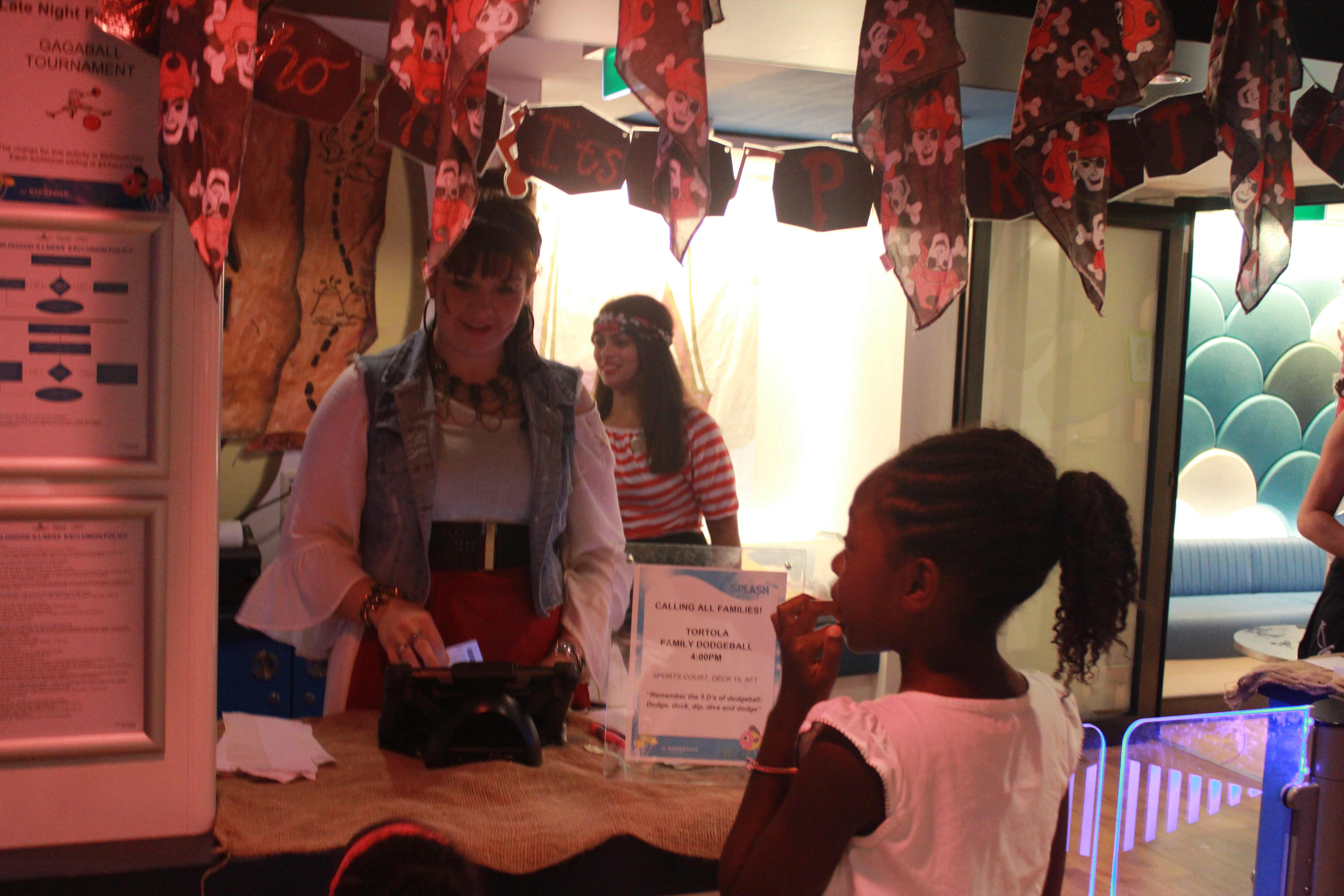 After that we went up to the Garden Cafe for soft serve ice cream for the kids (and dulce de leche for me). Then we dropped the kids off at Splash Academy for Pirate Night. 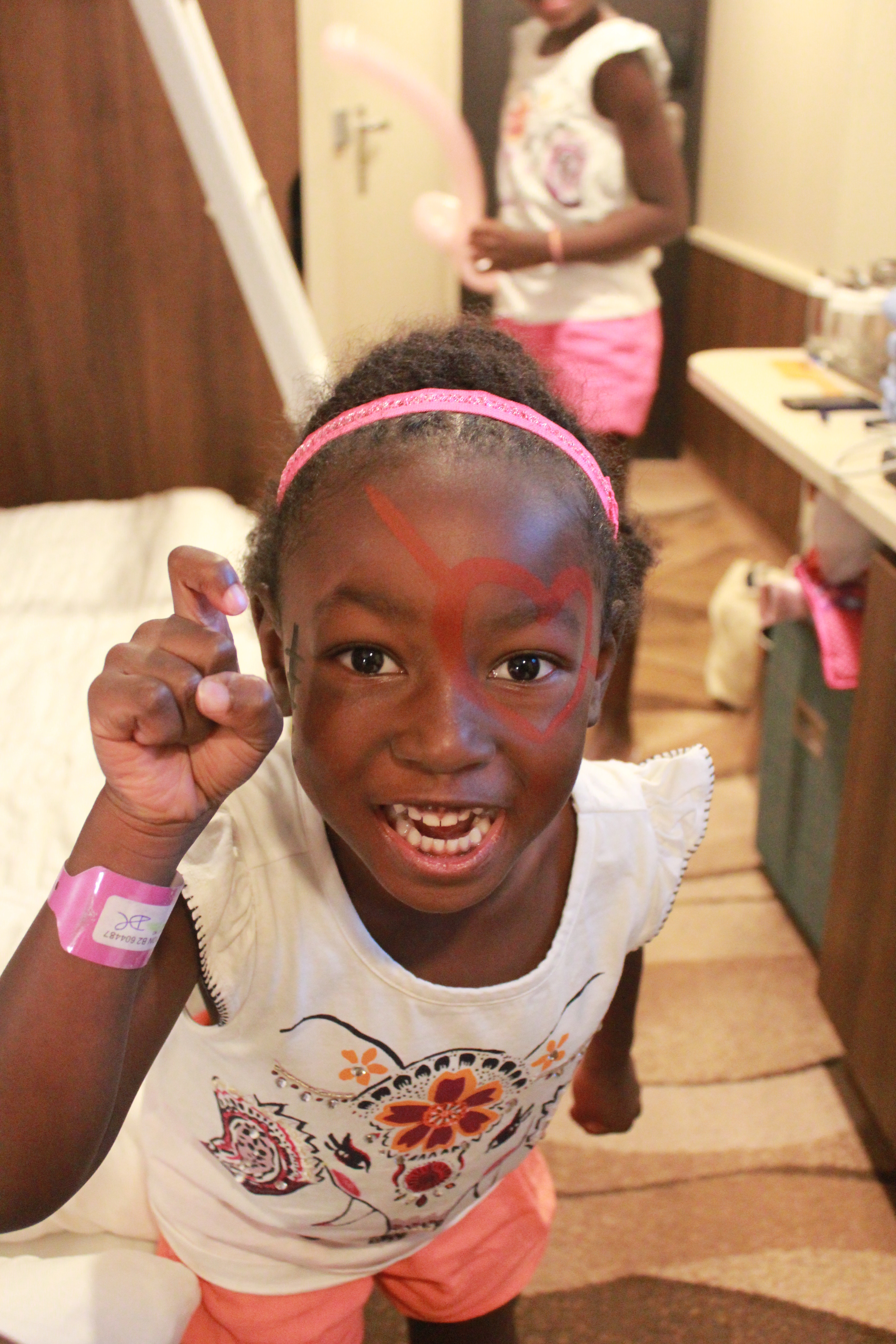 We strolled the ship a bit after that, visiting Spice H2O and walking the pool deck. We were wiped out from our lovely day on the beach and decided to head to bed early in anticipation of an early day on Tortola the next morning.

As you can tell from my blog we love traveling as a family and have a real love of cruising as a family.  As a travel planner and agent I love sharing all I have learned from our family cruises and helping other families plan memorable trips together.  If you are considering a trip with your family in the near future please do not hesitate to reach out to me as I enjoy helping readers discover the joy of family adventures together!  Email me at thepreciousmommy@gmail.com or take a look at our travel planning website, www.memorablevacations.net.