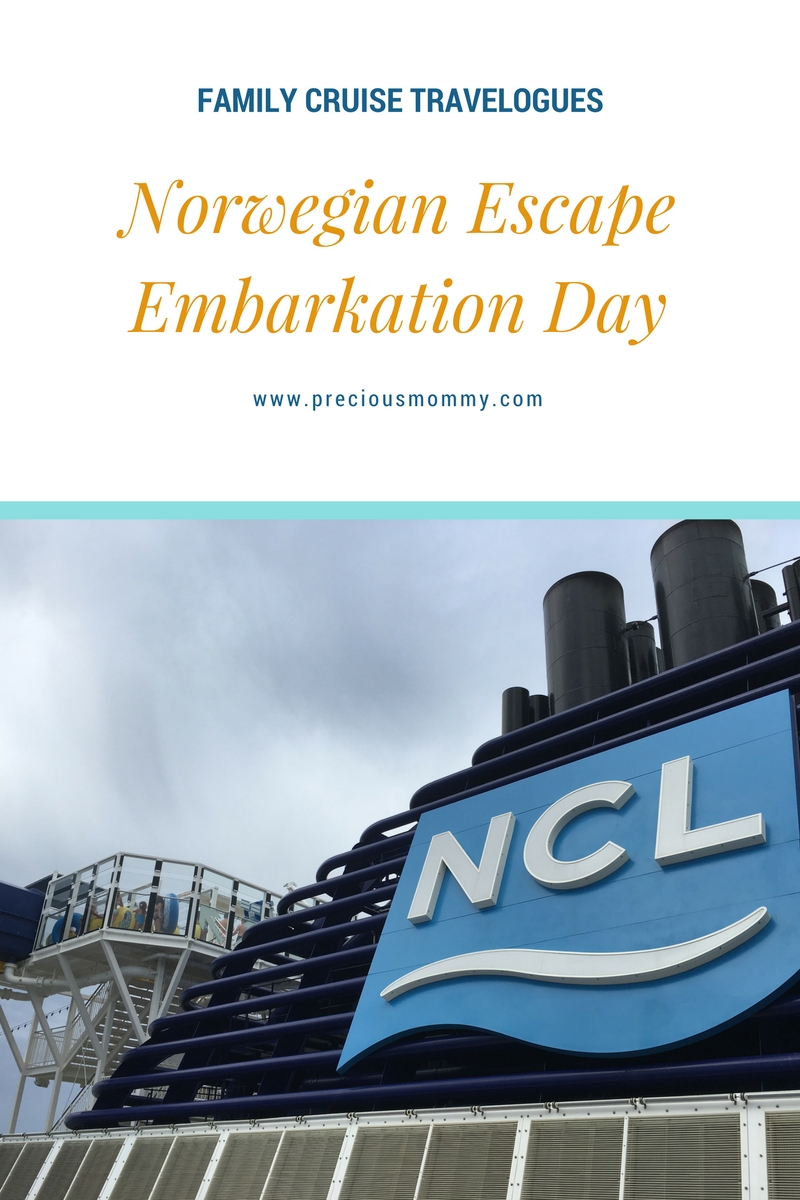 I had my eye on the Norwegian Escape for about one year; it debuted in 2015 and hubby and I were intrigued by the fresh, modern appeal of NCL’s newest ship. Off and on throughout the year I would casually check the rates to see how prices fluctuated with the season. I was not surprised to see prices drop after the summer 2016 season ended and hurricane season started but I was shocked at the incredible rates available in late Sept and October of this year.

Hubby and I talked it over and decided that I would take the girls and go with a one of my closest friends during the first week of October. He had to travel on business that week anyways so it seemed like a win win!

My buddy, Iris, flew in from Washington DC the day before we would leave. With the car packed and the girls buckled up in their pajamas I picked her up from the airport that night and then we drove straight down to Miami. We spent the night in a cheap Spring Hill Suites in the Miami/Ft Lauderdale area.

The next morning, after a decent complimentary breakfast at the hotel and some quiet time in the hotel room we decided to head down to Port Miami. Because we had booked our cruise only 2 weeks before sailing, we had been assigned a late port arrival time of 4:30 pm (departure on the Escape was 7pm on this sailing). But I had done a lot of research on the Cruise Critic message boards and noted that many other passengers on the Escape were not held back for late boarding times. We sent up a prayer and made our way to the port around midday.

The parking lot was close to the port and we easily managed to bring our bags to the porters at the curb who collected them for boarding. We then made our way in to check in and security.

The entire check in process from security all the way up to the gangway was only about 30 minutes; there were no passengers waiting for boarding in the waiting area! 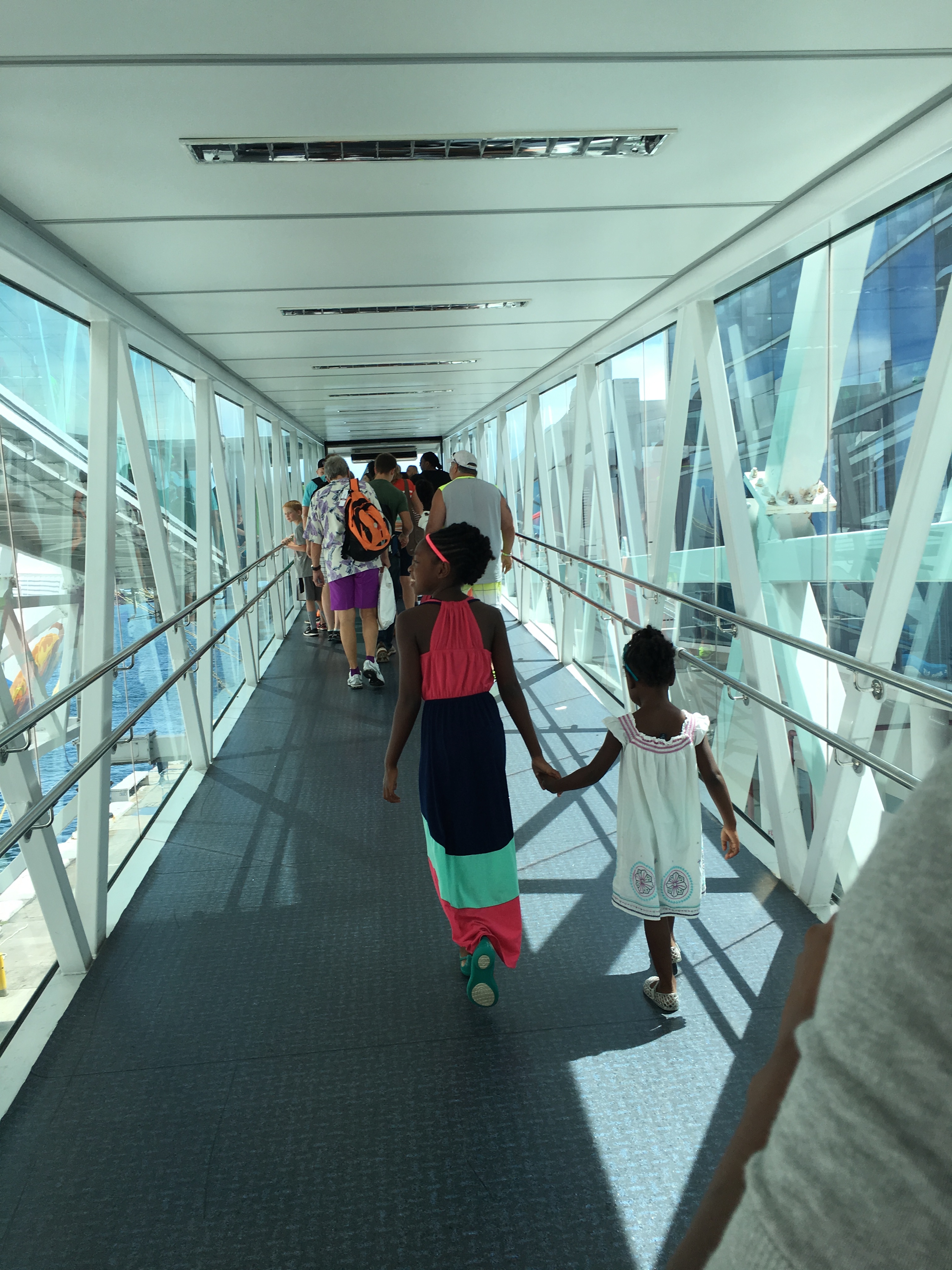 I must admit that being a die hard Disney cruiser I was quite disappointed at the entrance onto the ship. Passengers boarded onto deck 7 into a hallway. Deck 7 holds the ships casino so basically we were all walking into the casino and navigating our way to and fro to find what we needed. It was a very underwhelming experience compared to Disney’s grand soaring atrium and personalized welcome aboard by the staff.

I will say that all the staff we met on the first day were pleasant and helpful. While we were somewhat disoriented with the crowds entering the ship and figuring out how to navigate toward the forward elevators, a staff member helped by pointing us in the right direction . 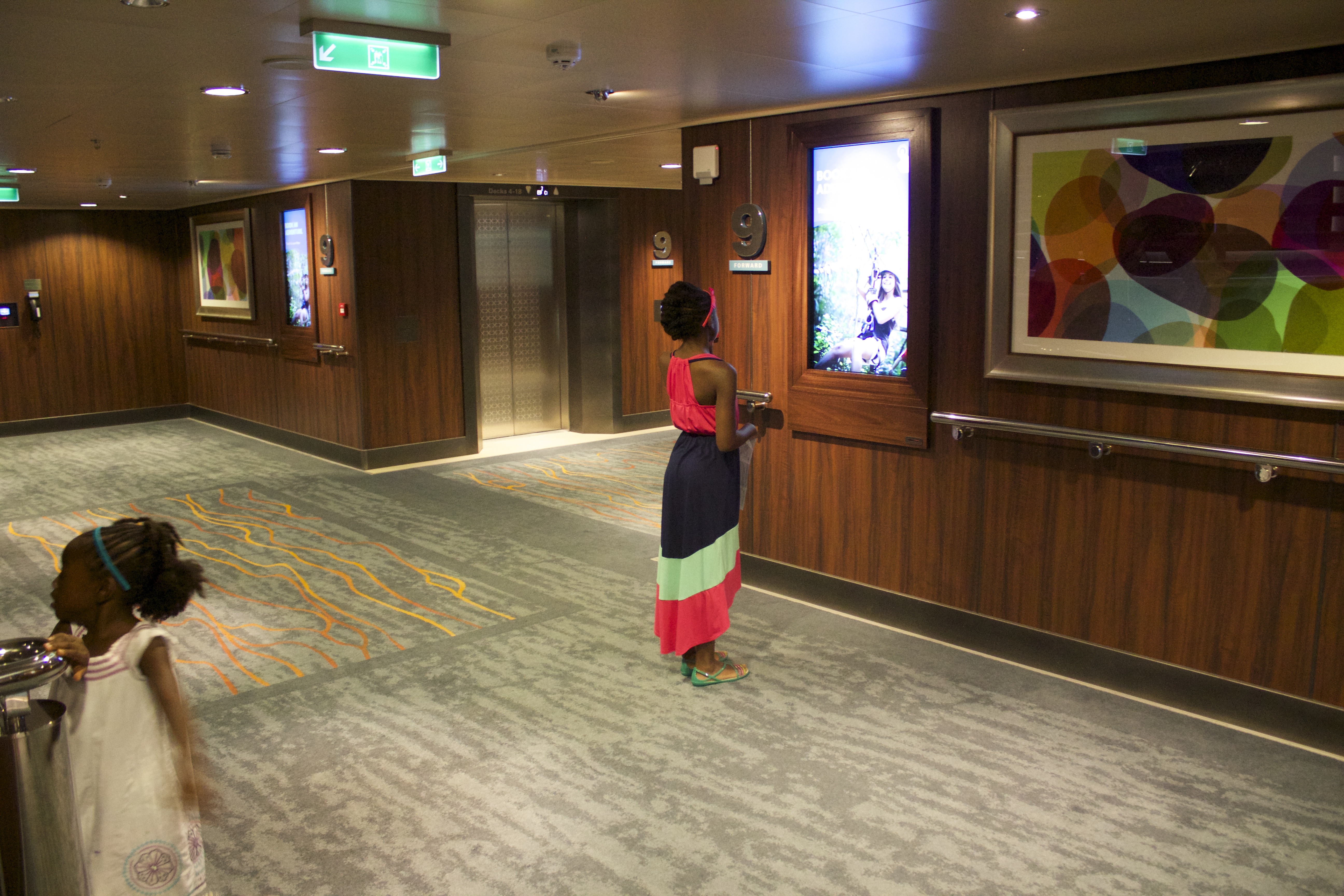 At each elevator bank you’ll find interactive screens that allow you to check your onboard account, navigate the ship, look up menus for the day and more…

When we boarded it was around 1:30 pm and from the port we could see passengers standing on their balconies, so we assumed that the rooms were ready. We easily found our room on deck 9 and were instantly pleased. 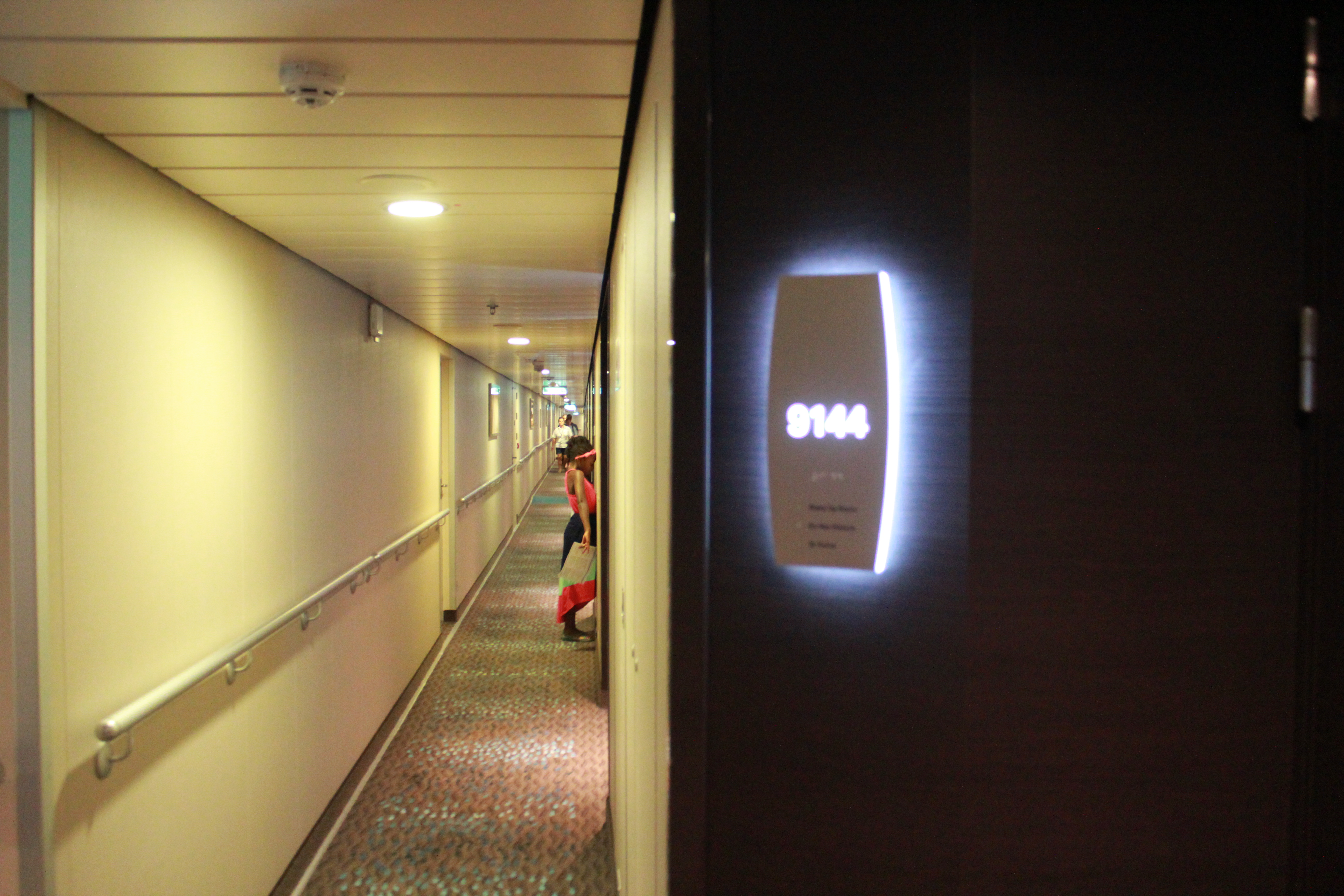 I really liked the slick, modern décor of our balcony suite and was more than happy with our extended balcony! 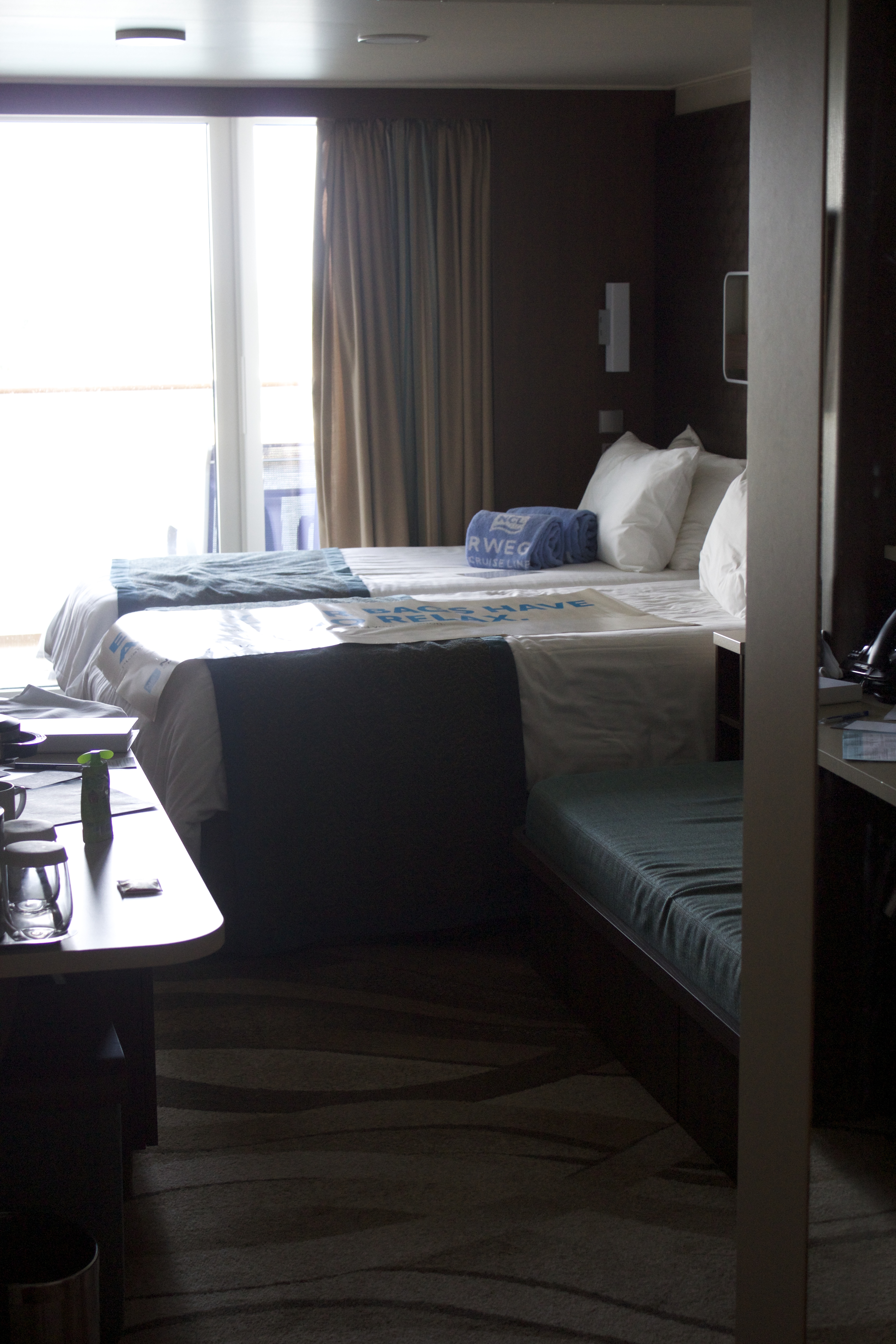 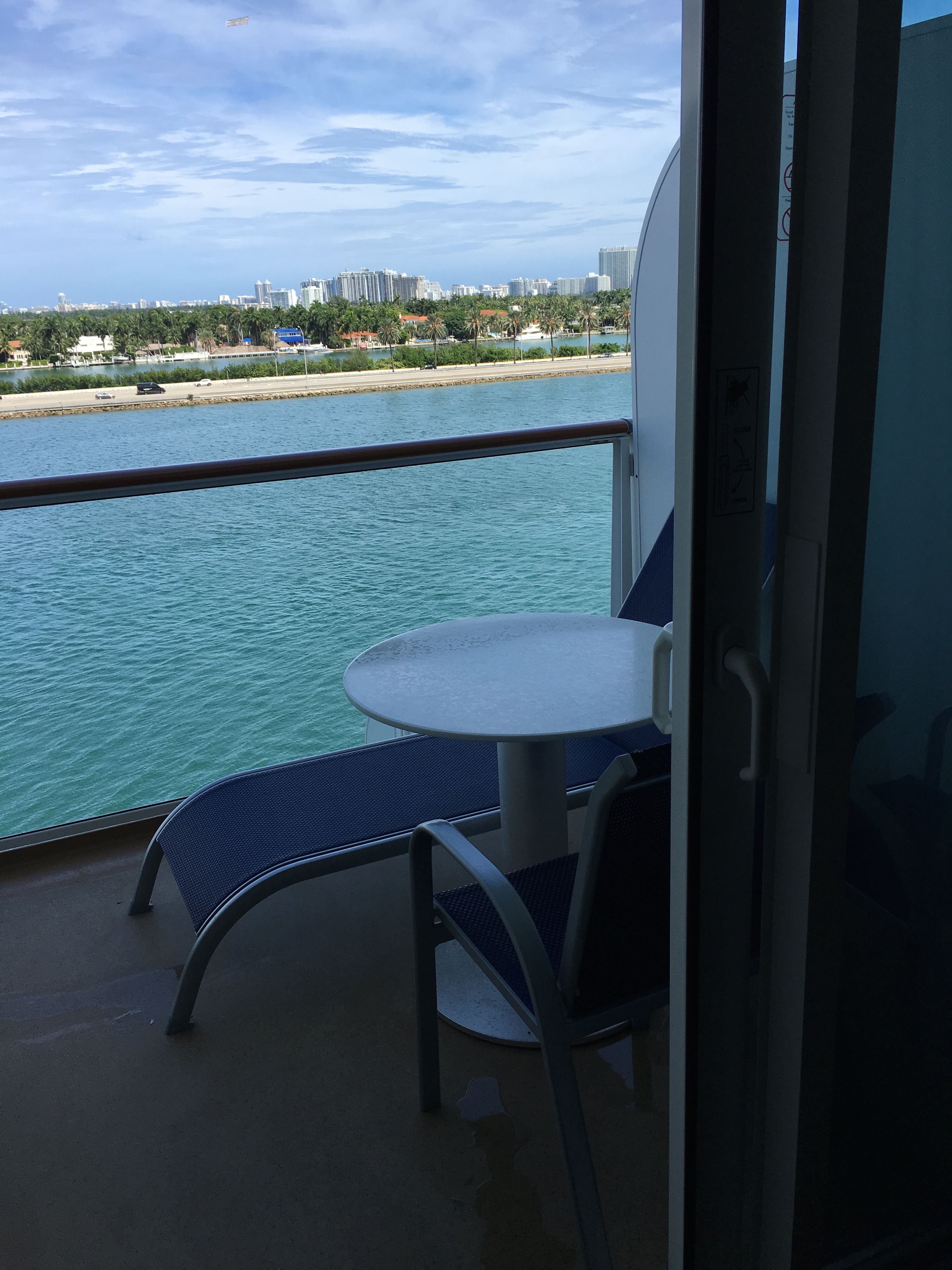 This was the best balcony I’ve ever had on a cruise; it fit a lounger, table and two chairs perfectly

We secured our carry on luggage and decided to explore the ship a bit, heading up to the Garden Café for lunch. 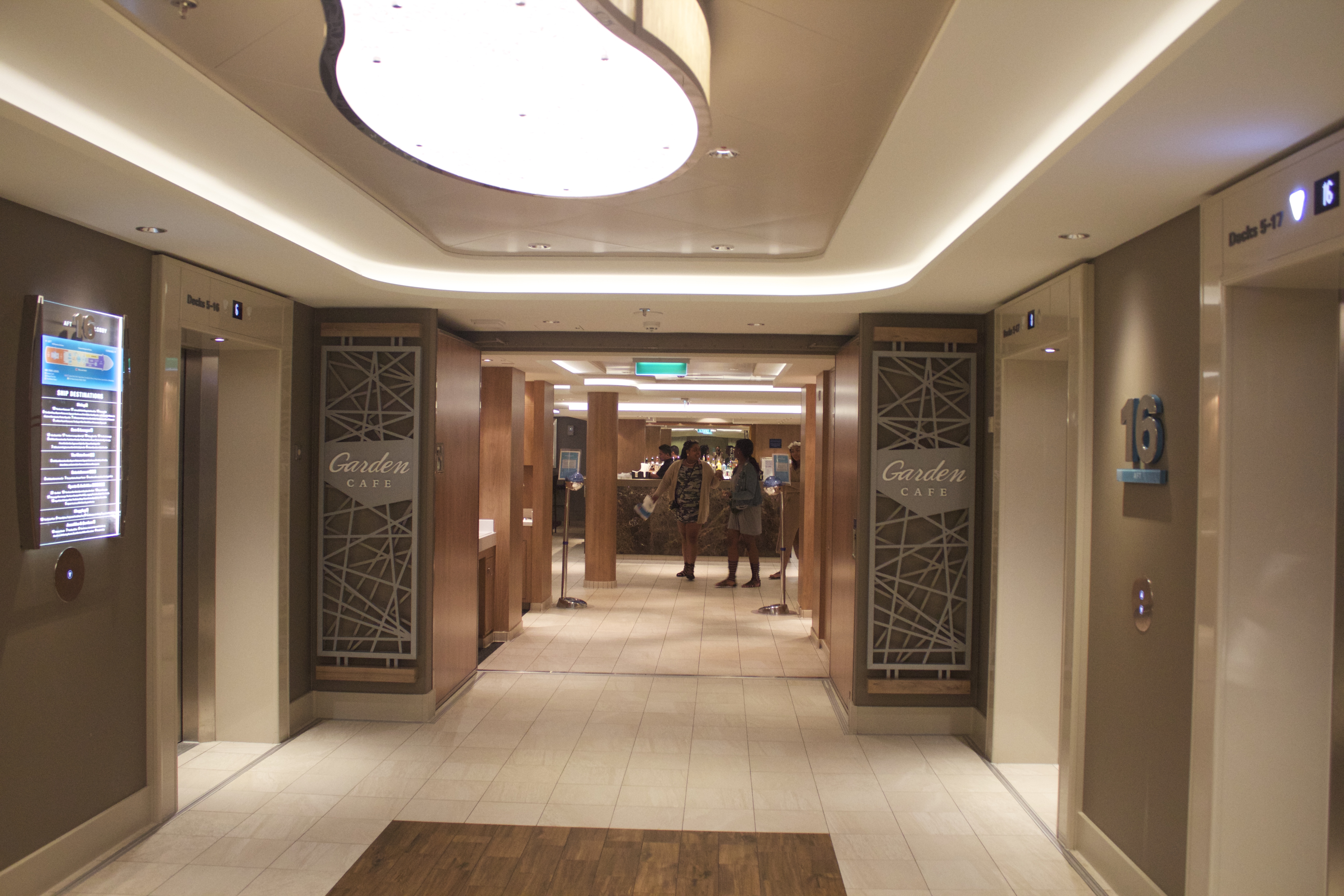 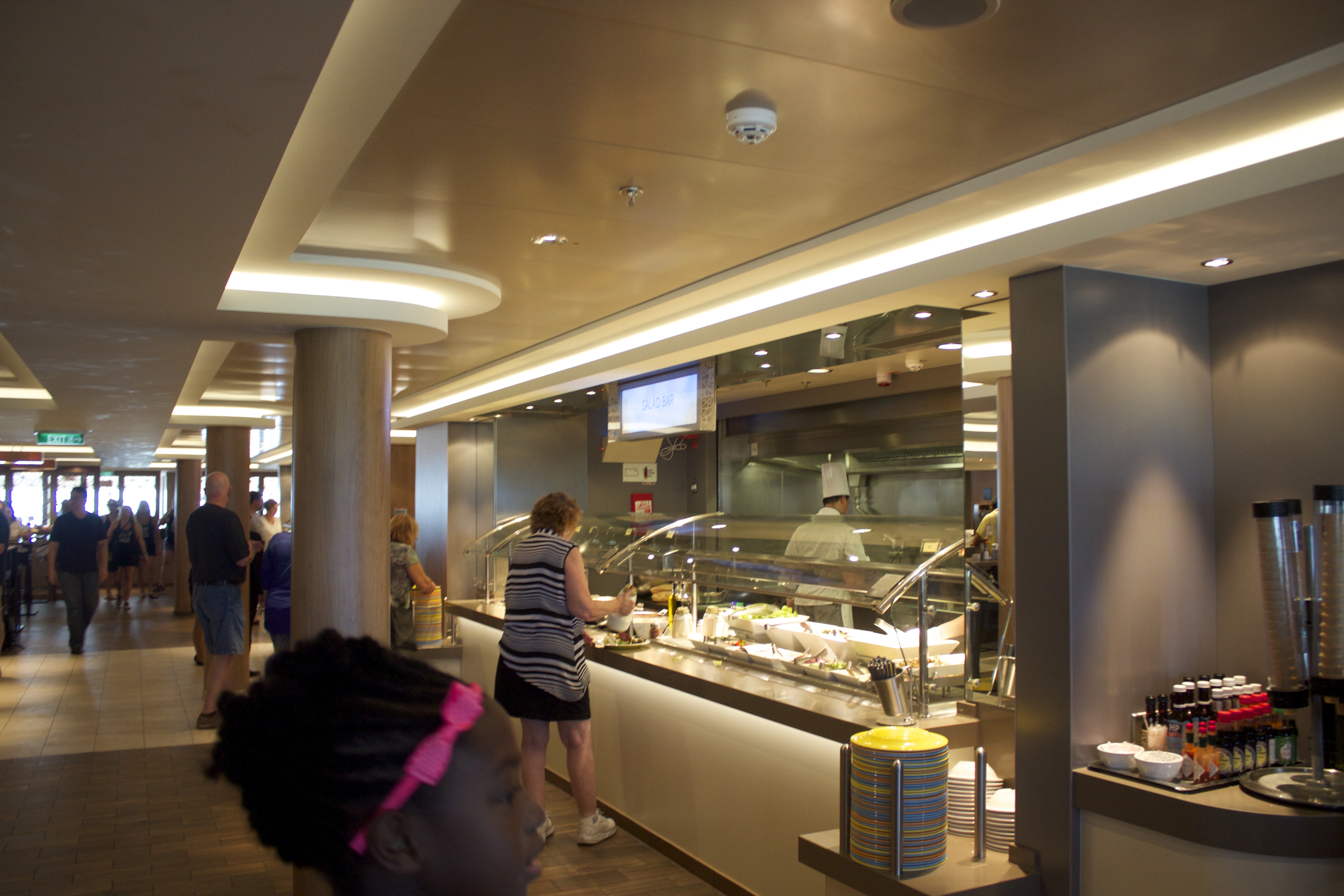 We headed to the back of the restaurant where we easily found a table (and noted that the buffet lines were shorter here). The lunch items on the buffet were really good with a variety options to make everyone happy. 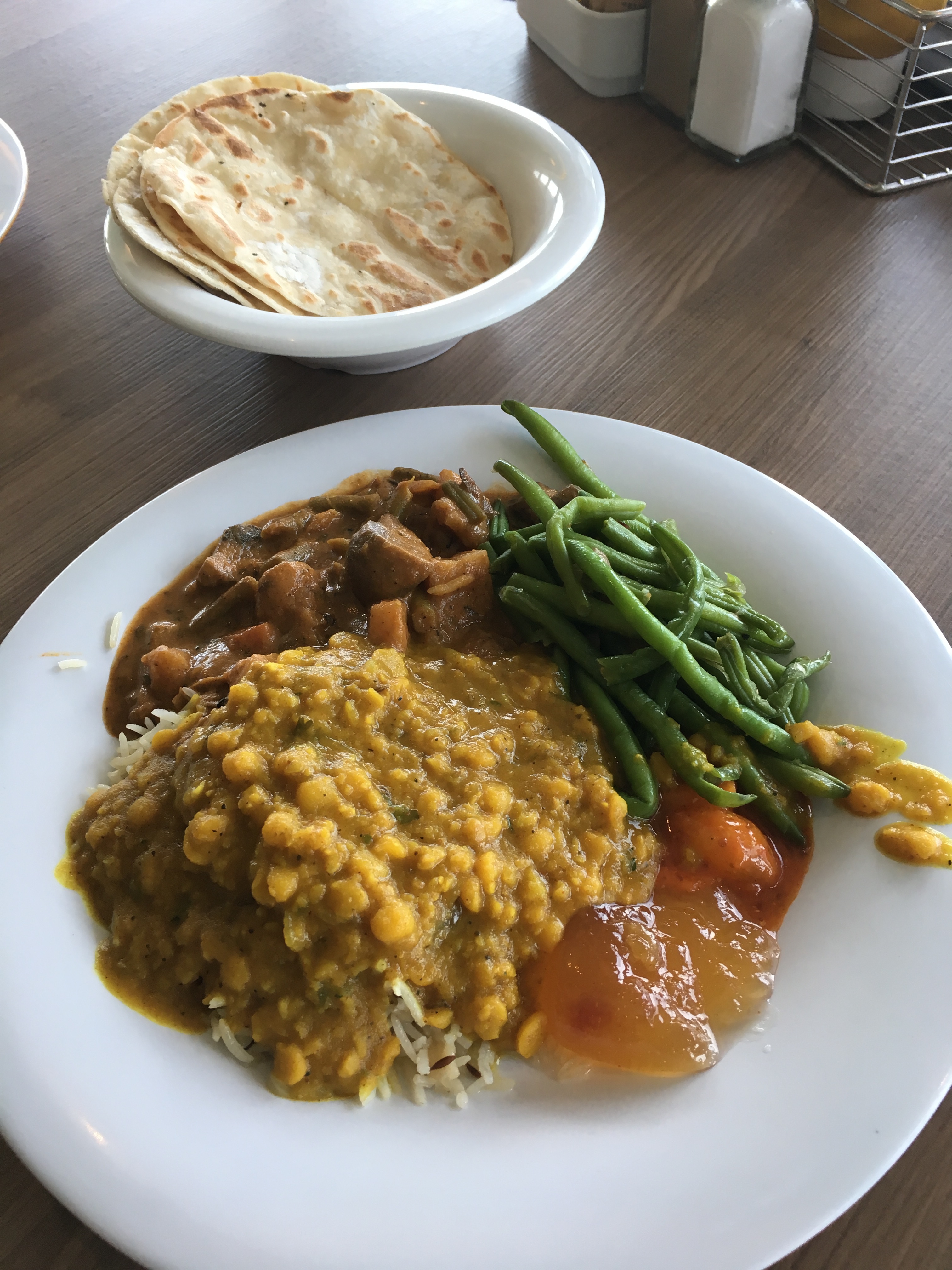 Every meal at the buffet featured an Asian bar which included authentic Indian food and made to order chapatis (roti). I was in love and my tummy was happy the whole cruise 🙂

After lunch we headed straight to the kids club area to sign up the girls. Splash Academy is the NCL kids club and on the Escape it is located on deck 5. 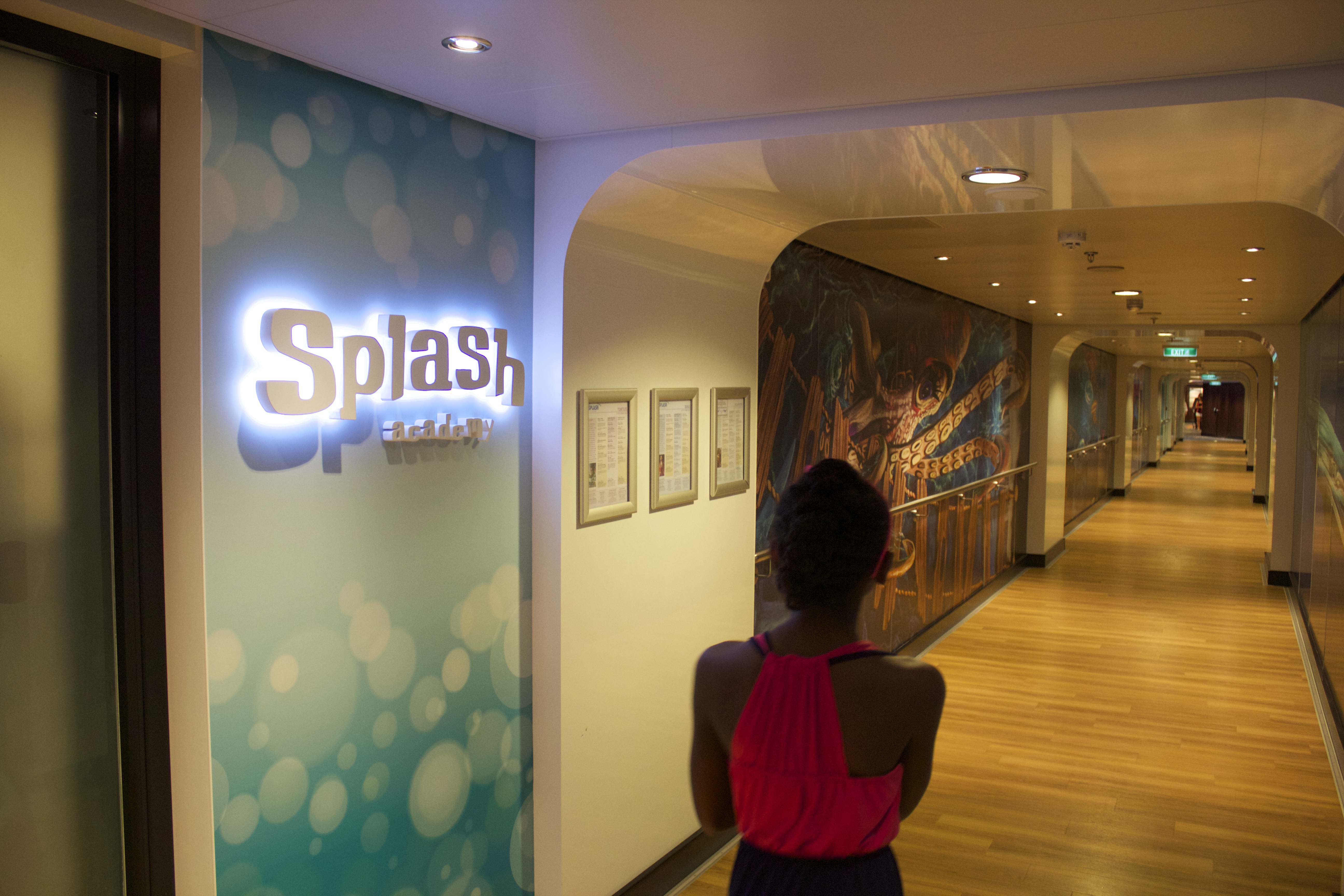 We walked in for registration, which went smoothly, and the kids were able to run around a bit and explore the club. 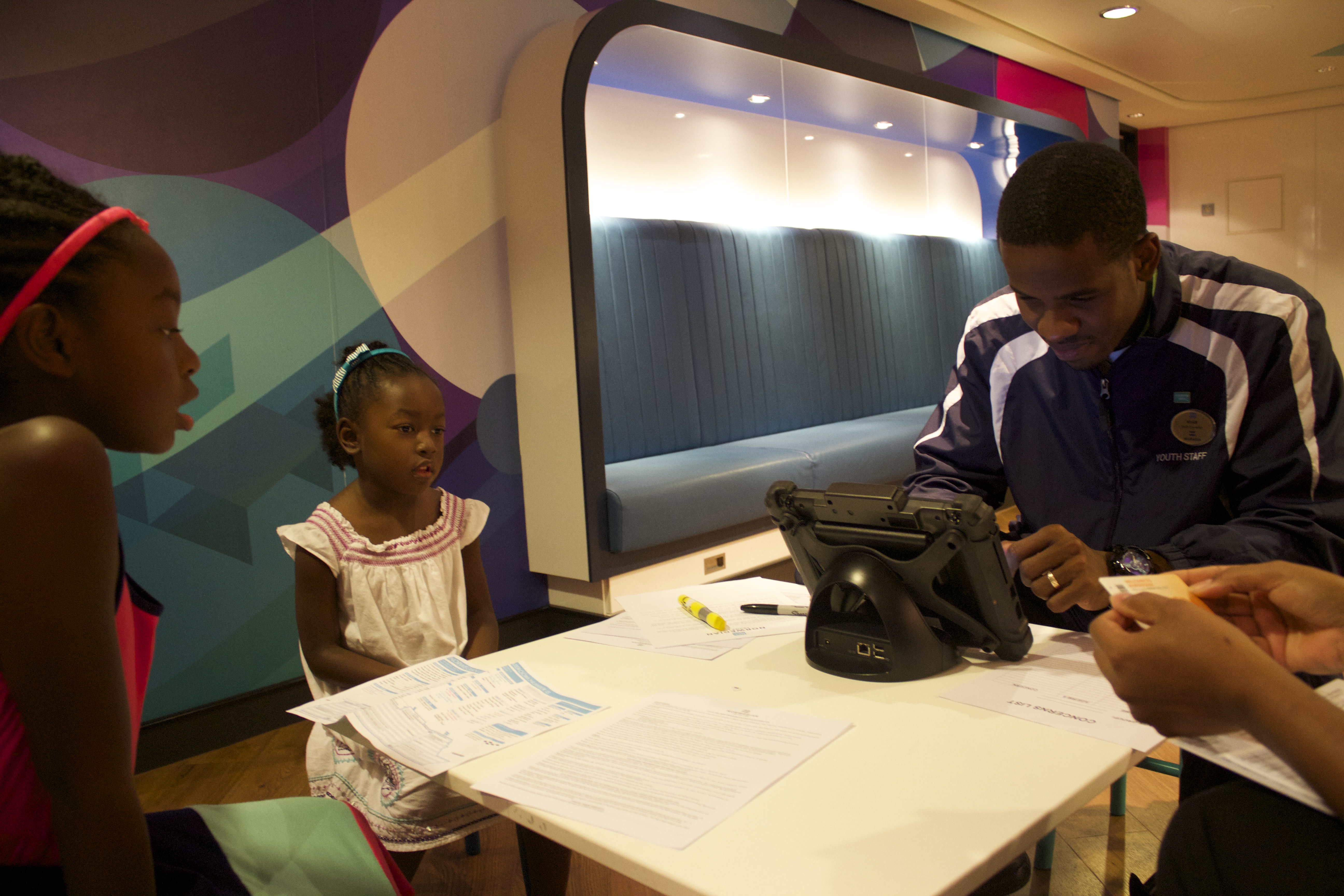 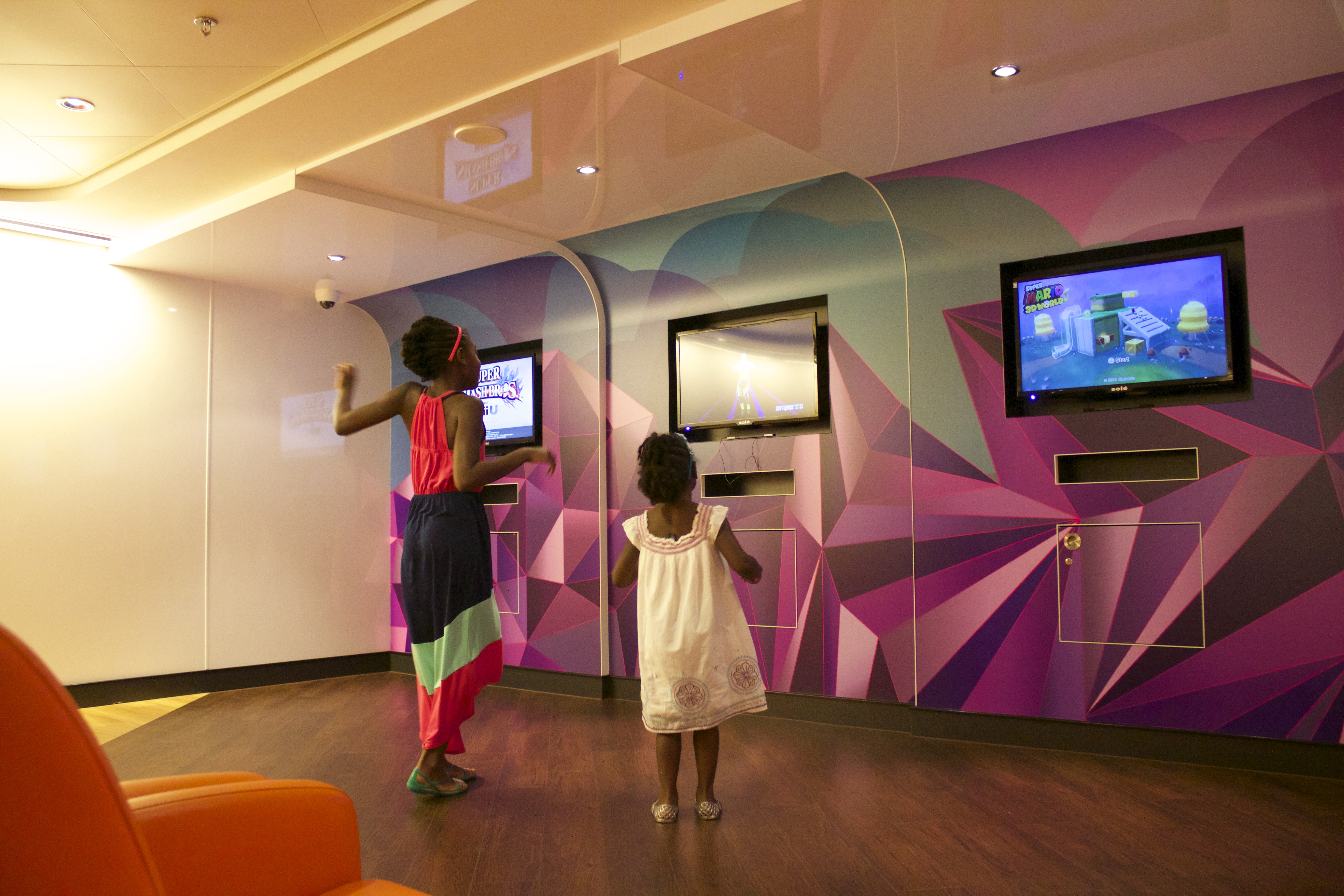 We chatted with fellow cruisers while the kids played a bit then we headed up to our room where our luggage had been delivered. 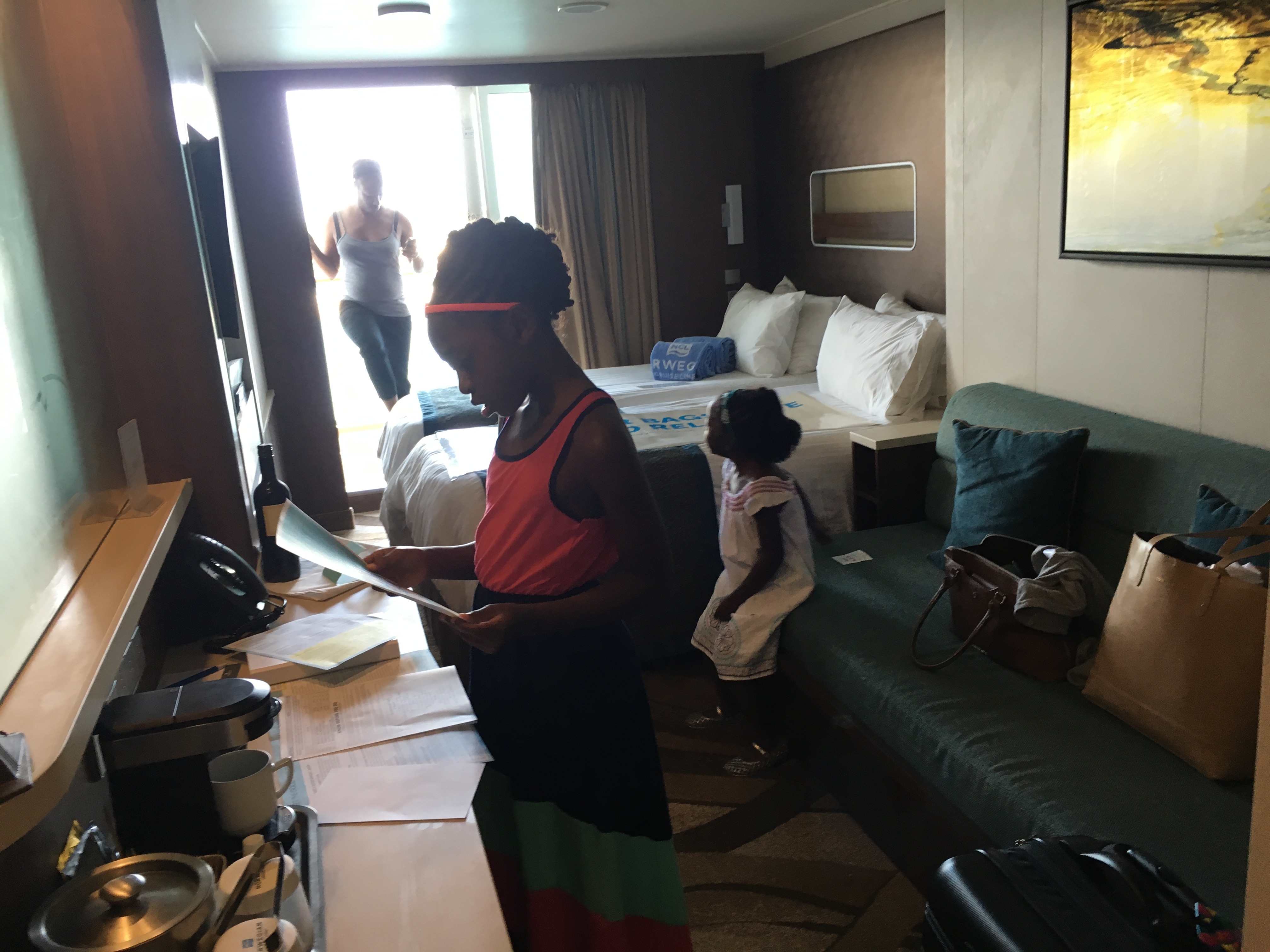 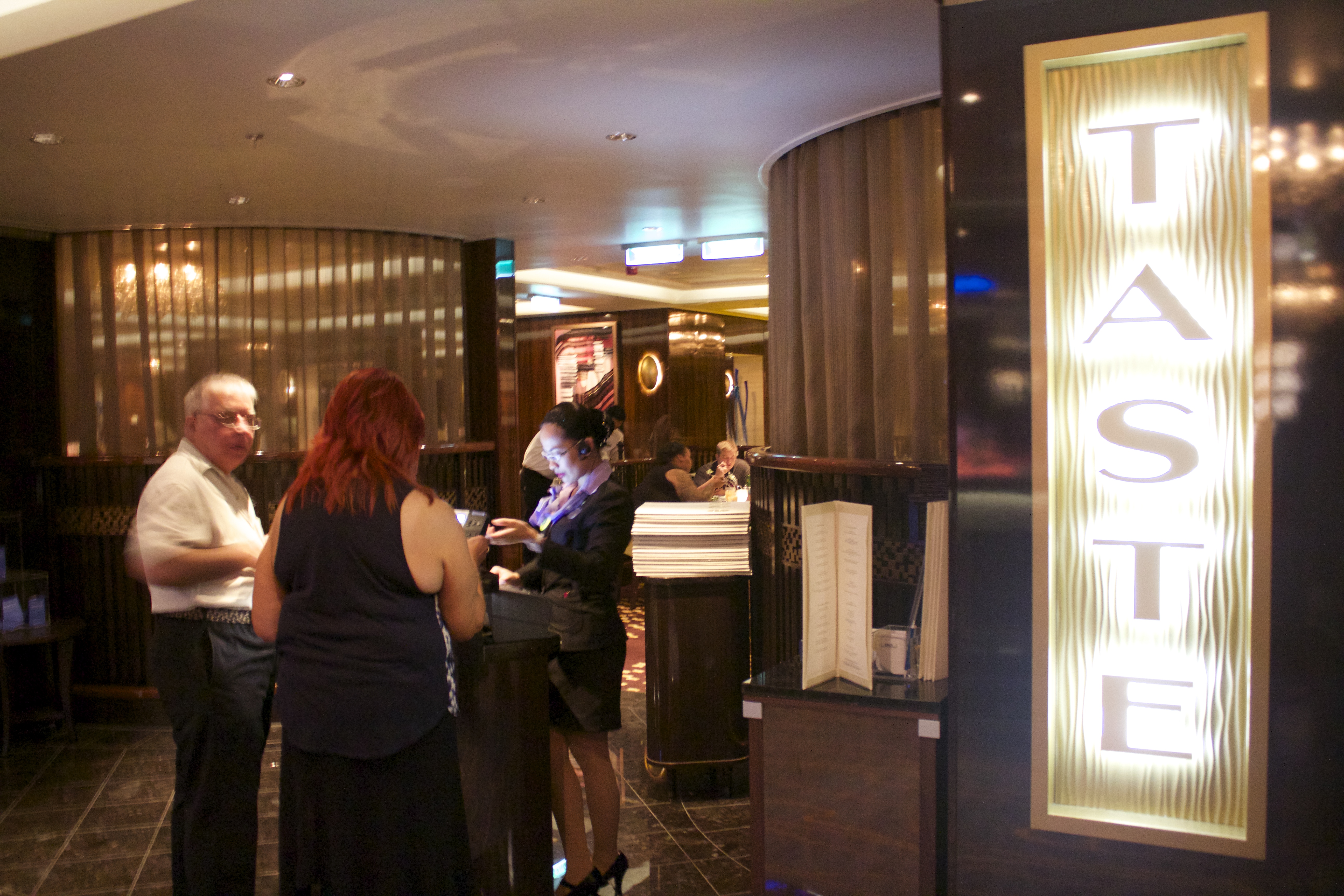 After muster drill we were pretty much ready for dinner. We had made reservations in advance at Taste (one of the complimentary main dining rooms onboard) but when we arrived it was very quiet and we were quickly attended to. 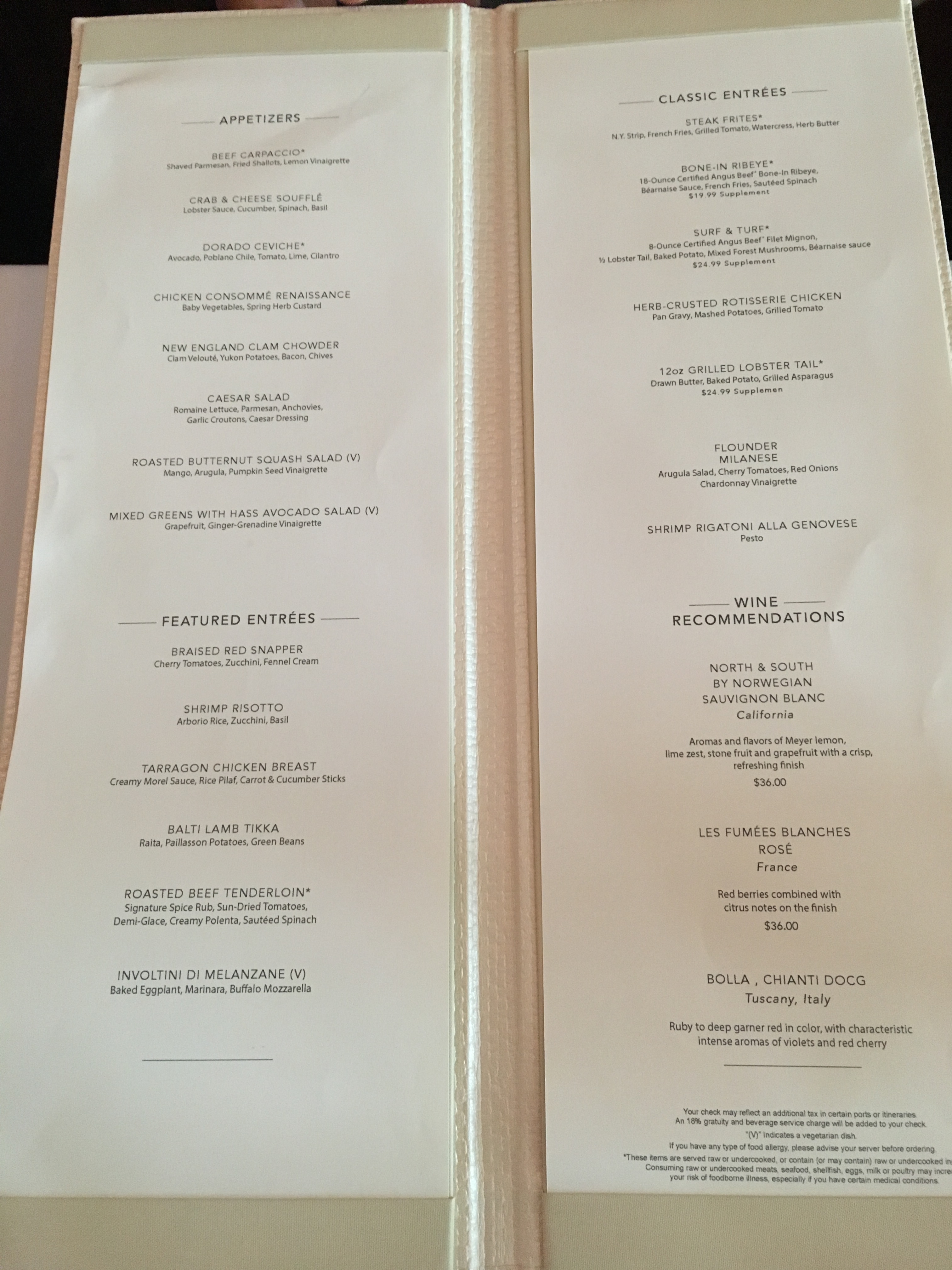 NCL has trademarked the “freestyle” cruising experience with includes no set dining times for it’s passengers. We are able to eat at any time we like each evening; the only caveat is that we don’t have the same dining staff attending us since we are eating at different places at different times each night of the cruise.

We really appreciated the kids activity & menu sheets provided at each meal! They kept our girls occupied for much of the time during dinner

Dinner was very good and the wait staff was super friendly. I could tell they wanted to push dinner along, whisking away plates as soon as we were done eating, etc. I didn’t mind it at all; with young kids I don’t really enjoy drawn out dining experiences. 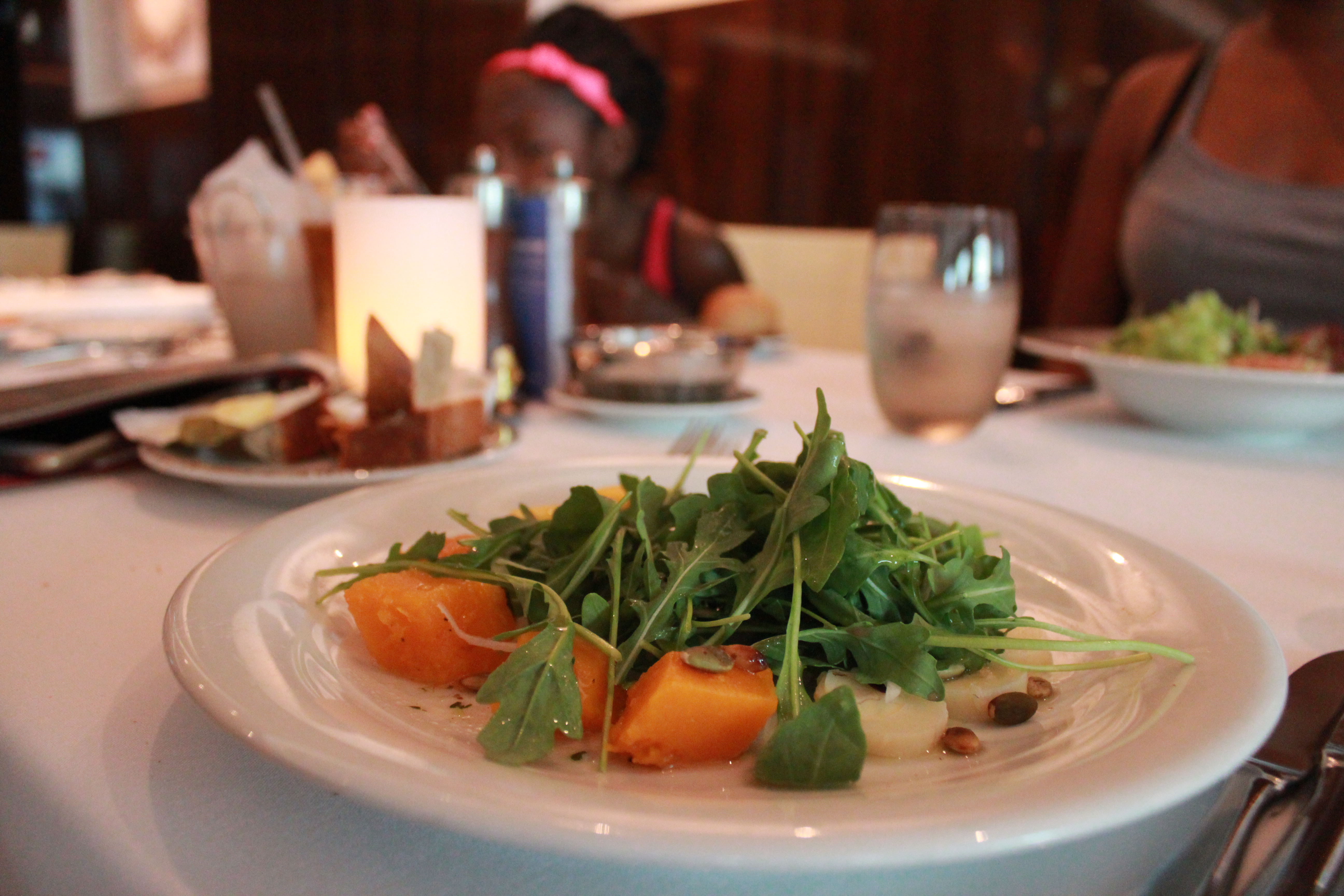 I wanted to order a second serving of this Butternut Squash salad, it was so good!

This particular evening my youngest daughter was exhausted and wanted to head back to the room ASAP to rest. The wait staff kept her entertained with light jokes and teasing and one of the hostesses came over during our dessert course and made small talk with the kids. It was a nice, natural gesture from the staff; my daughter wasn’t whining loudly or disrupting the other diners but she enjoyed the attention from the staff and it helped the time to go by quickly. 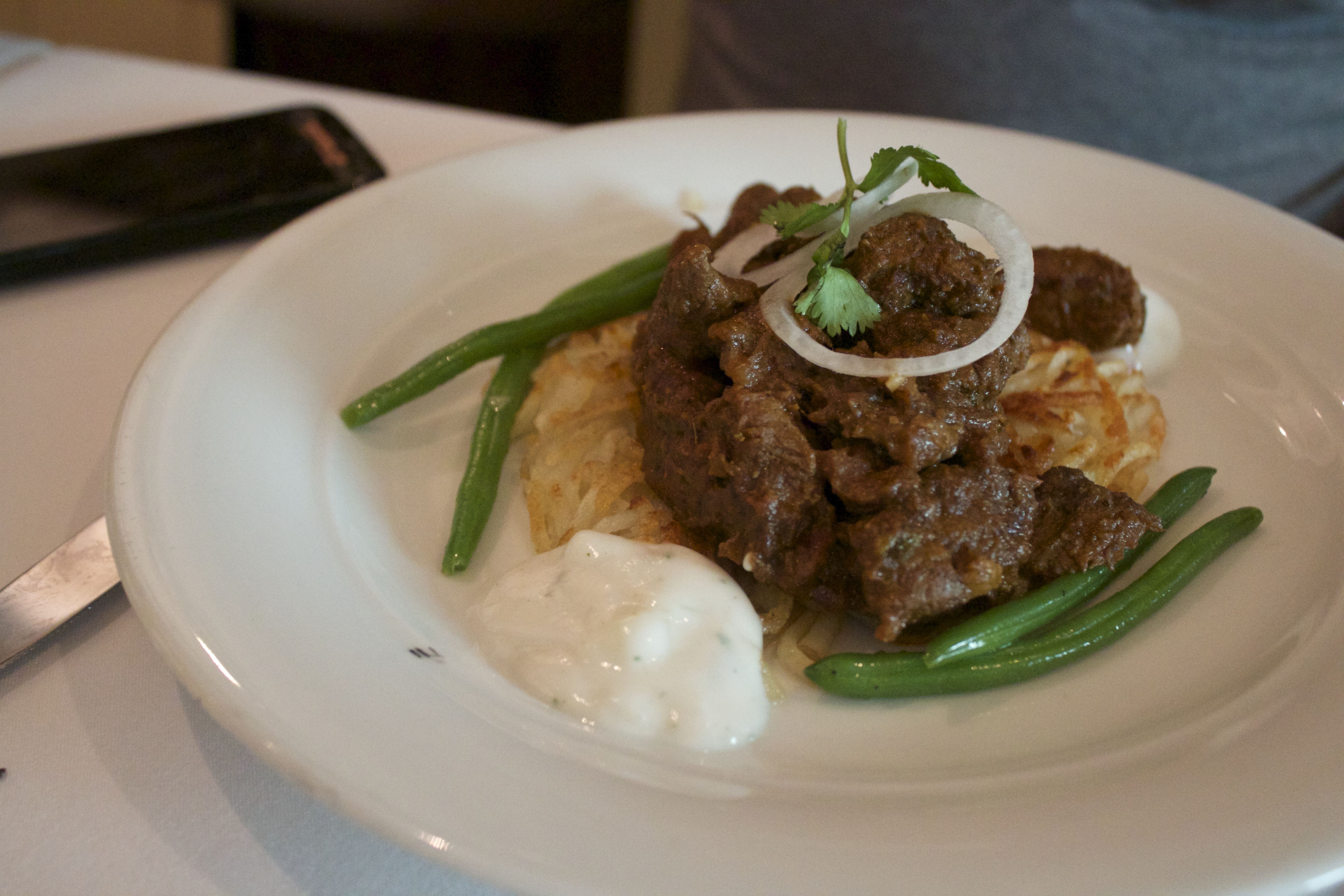 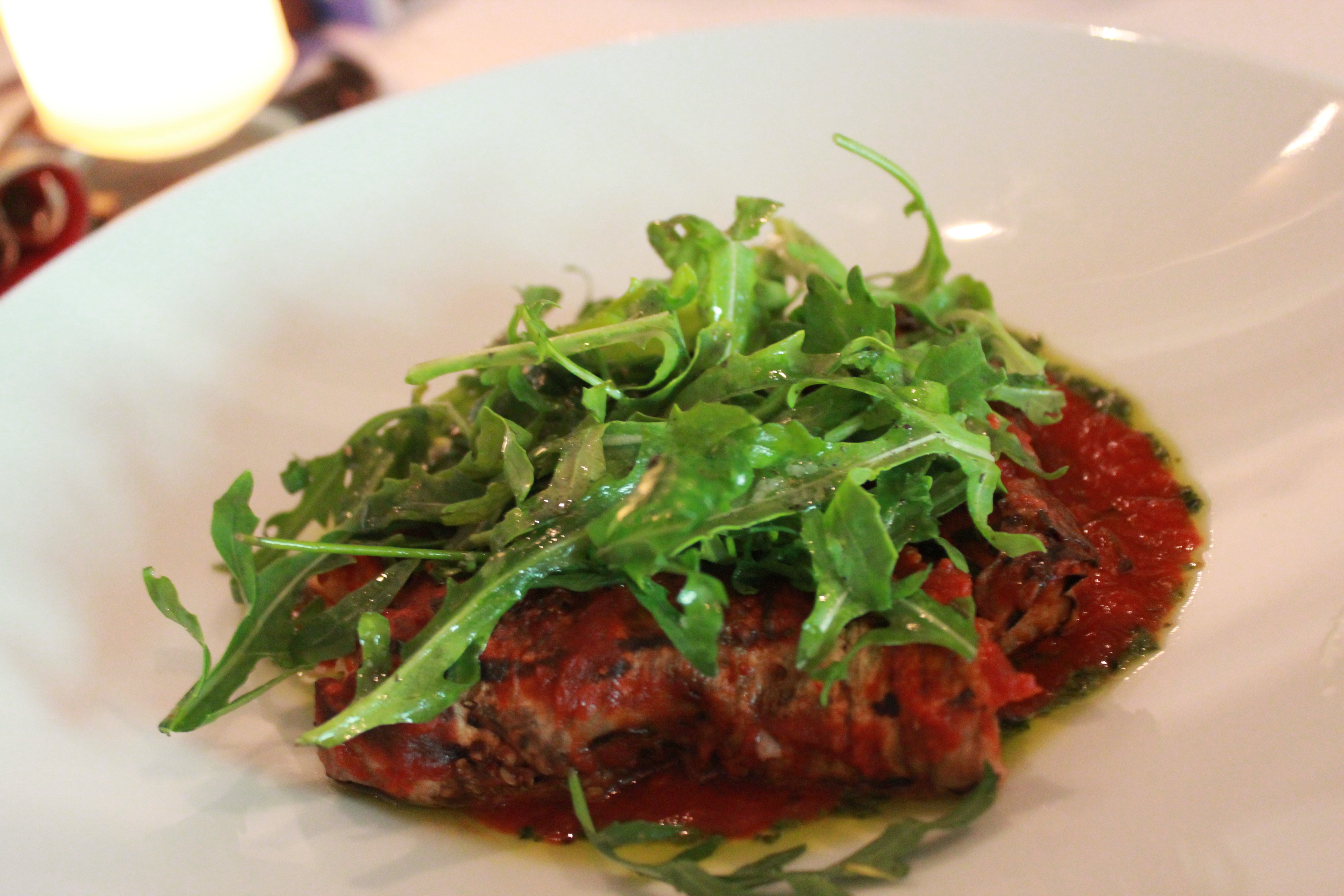 While we were eating dinner the ship began it’s departure from the port of Miami. When we had finished our meal we went up to a quiet forward deck area and watched the ship slowly push out to open sea. 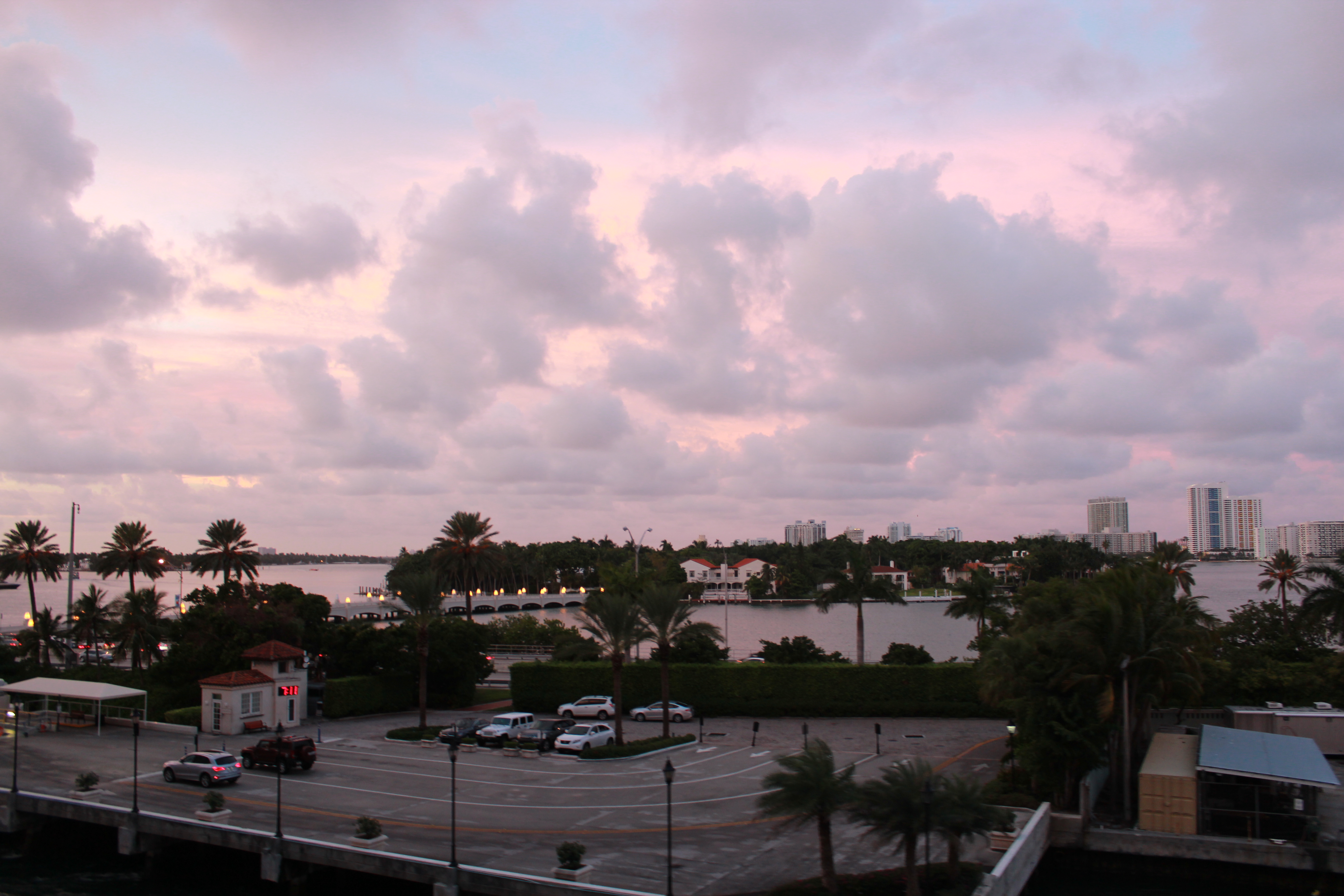 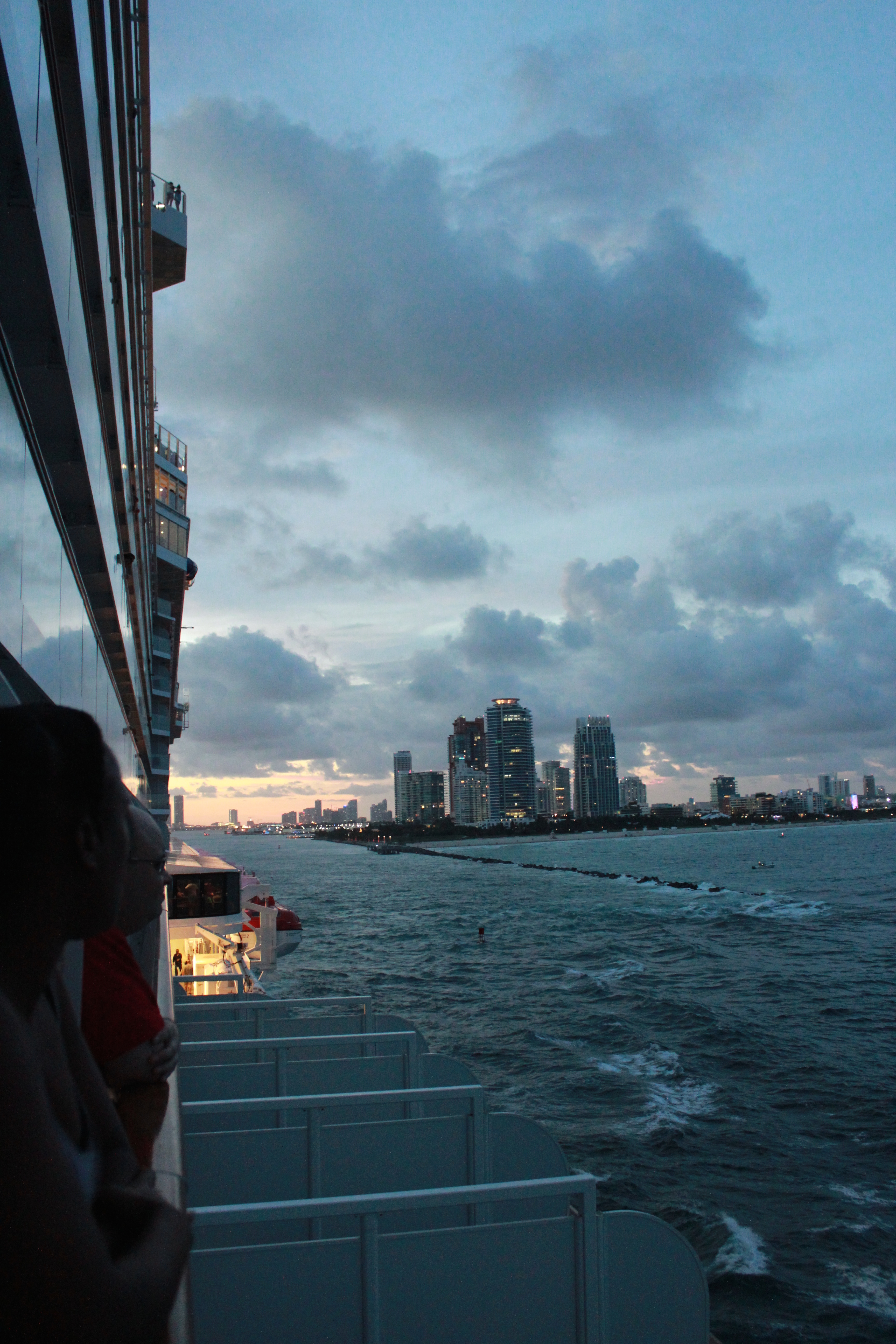 It was a picturesque departures as we cruised out of the harbor and finally past Miami Beach. We stayed on deck for a long time watching the scenery scroll by. 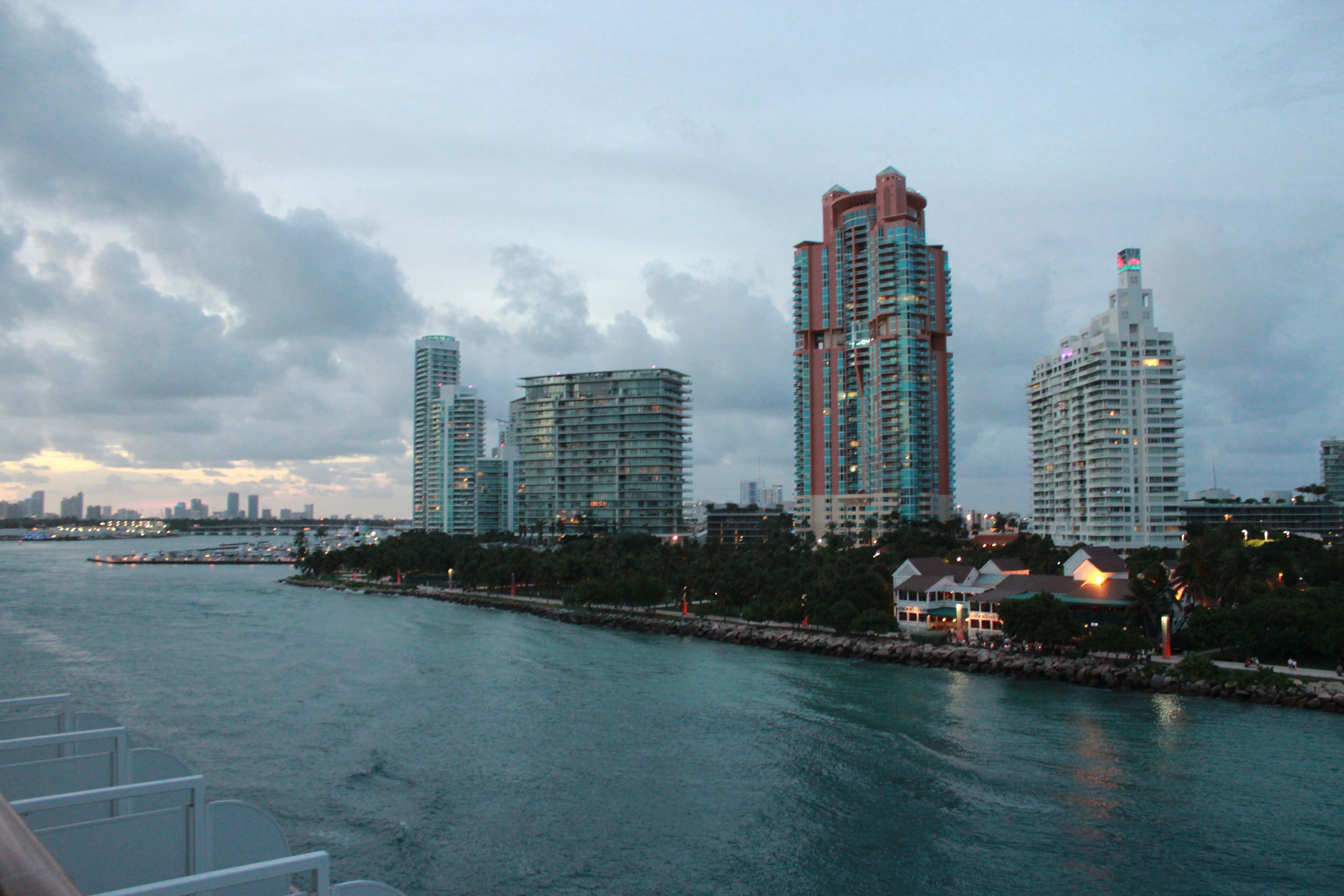 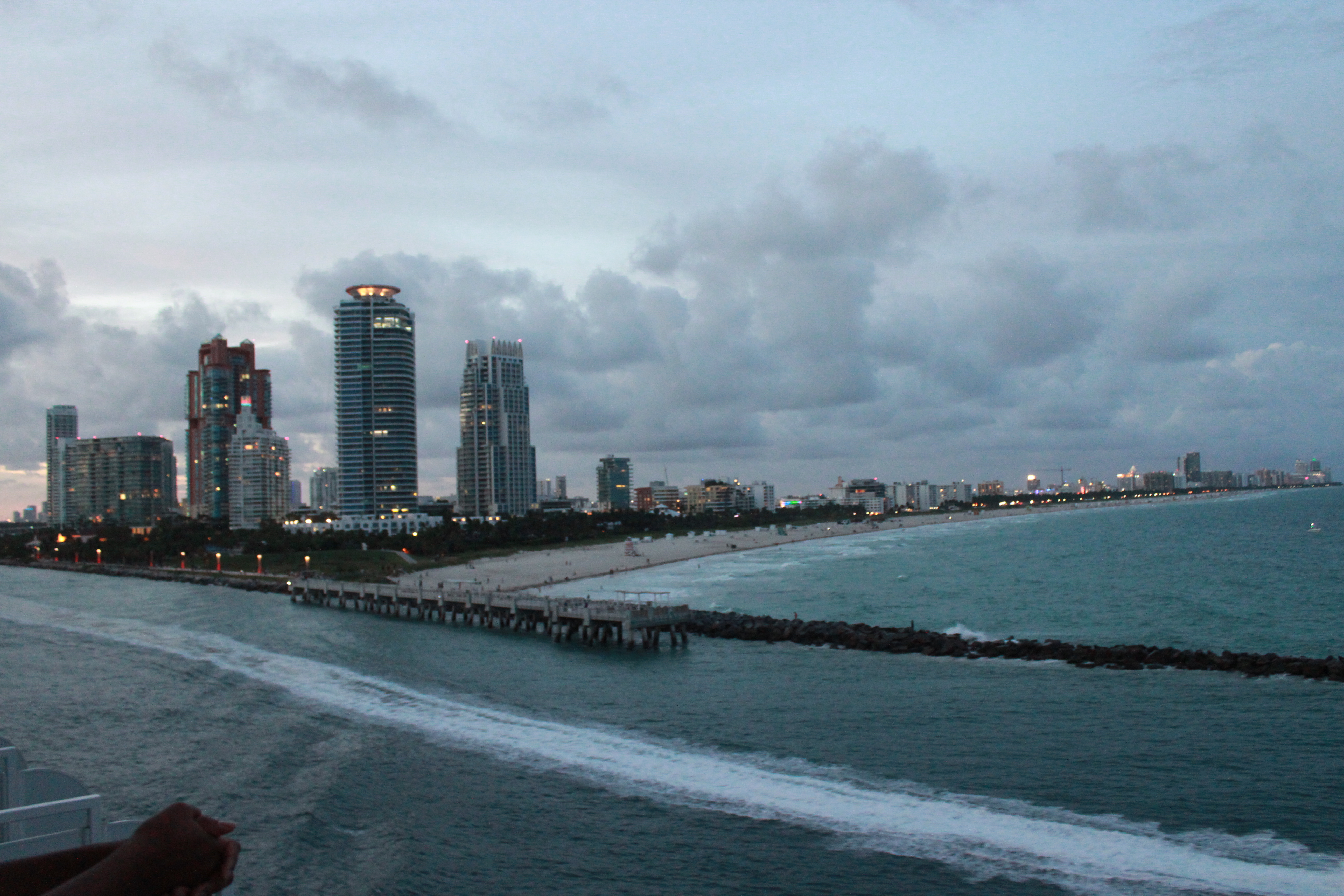 We returned to our room after strolling the ship a little when our meal was over. I was really tired from driving the night before and getting to bed in the early hours of the morning. The kids were cleaned up and in PJs quickly.   My older daughter decided she wanted to visit the kids club for a little while so she got dressed again and we dropped her off. While she explored the club and made some new friends we hung out in the room and relaxed.

It was a restful end to a great embarkation day and we were super excited to see what the week ahead would hold for us on the Norwegian Escape.

Do any of you love cruising as a family?