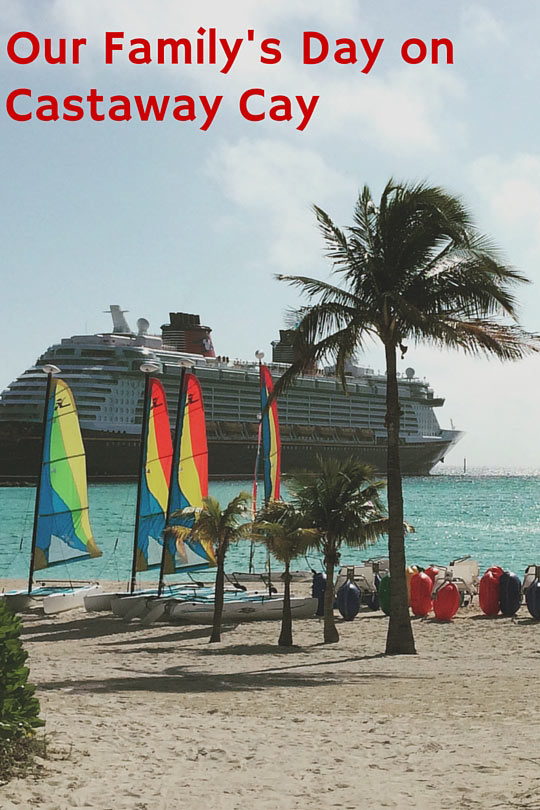 On our third day of the Very MerryTime Disney cruise we awoke to find we were docked at Castaway Cay, Disney’s private Bahamas island. 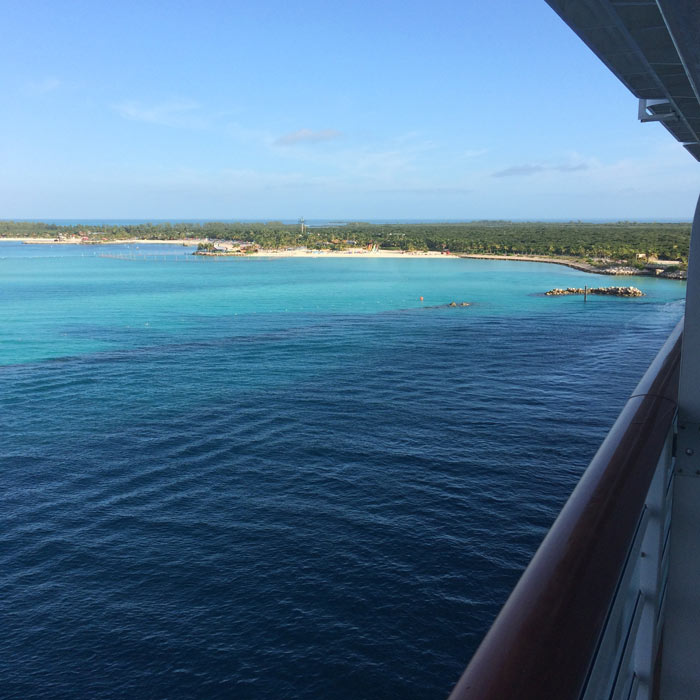 THIS IS THE VIEW OF CASTAWAY CAY FROM OUR VERANDAH THAT MORNING. JUST GORGEOUS!

We a decided to do something different for breakfast and headed to the Enchanted Garden restaurant where Joel and I had shared a lovely dinner the night before. 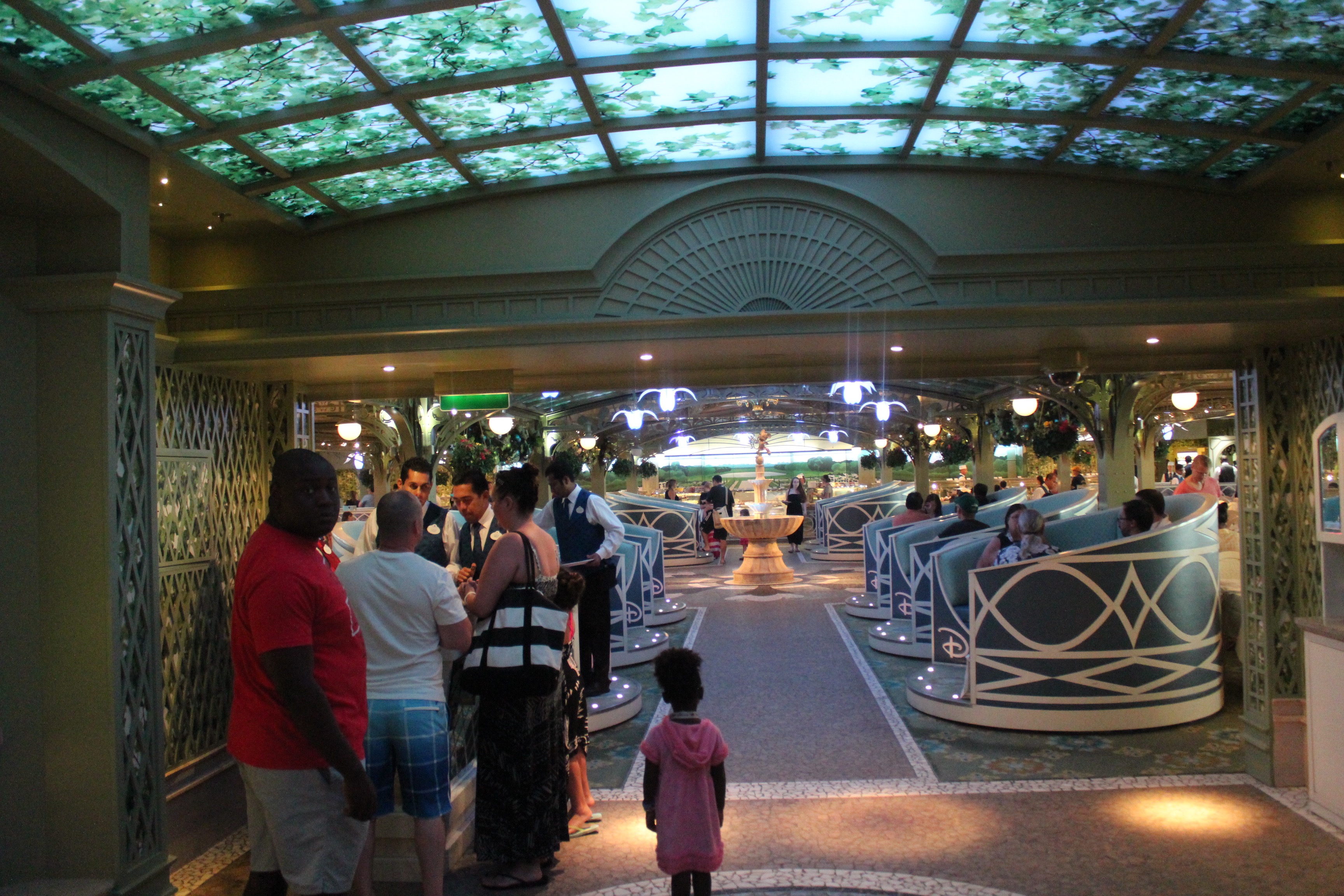 THE ENCHANTED GARDEN RESTAURANT; EVEN MORE BEAUTIFUL IN THE DAYTIME

We were surprised to find that the restaurant was not very busy at all.  We were seated promptly in one of the lovely circular booths, right next to the buffet.  We were able to order custom omelets and then walked over to the buffet to fill our plates.  The selection of food was excellent with a variety of options; we were delighted to find that most of the items we enjoyed in Cabana’s buffet happened to be offered in the Enchanted Garden as well. 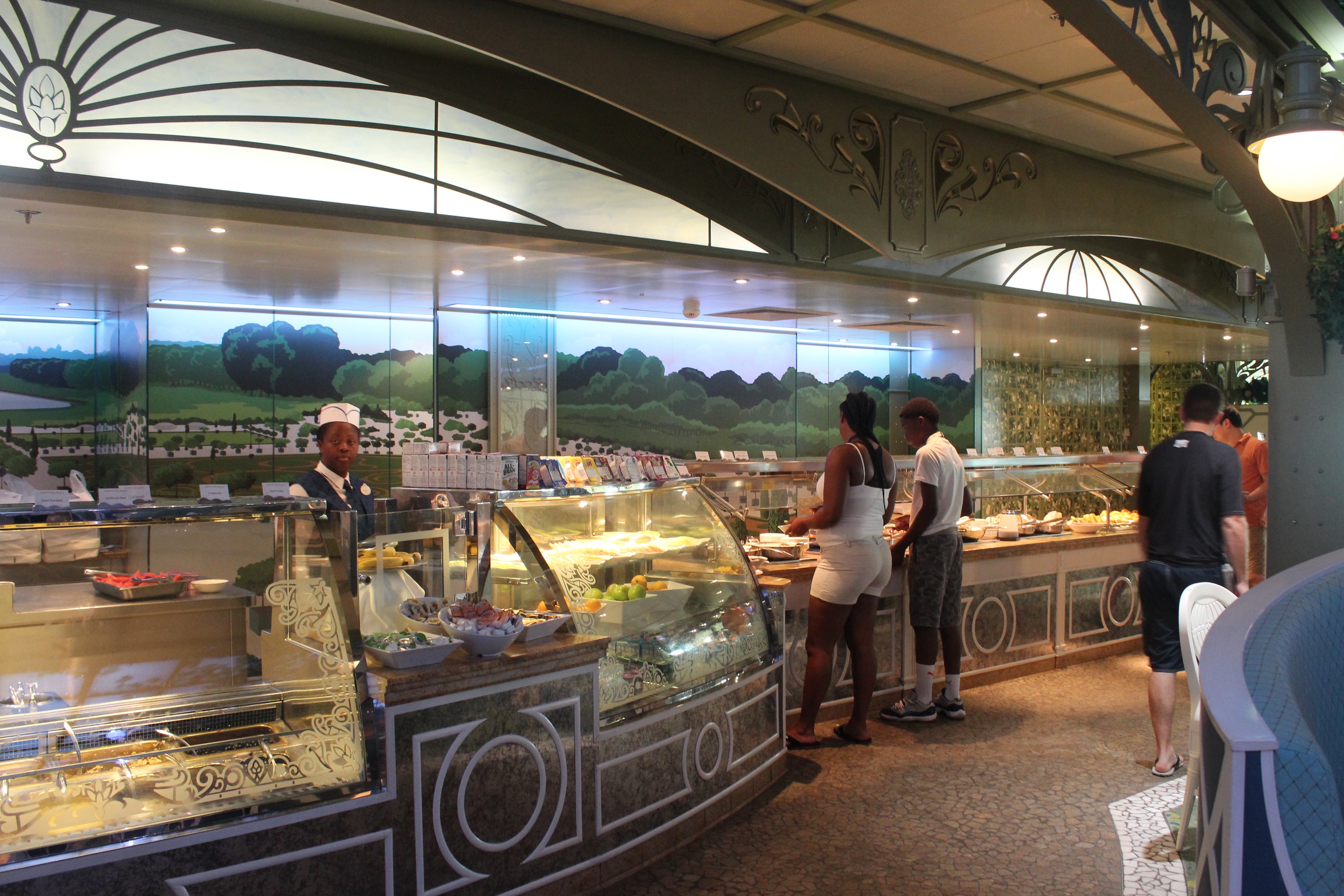 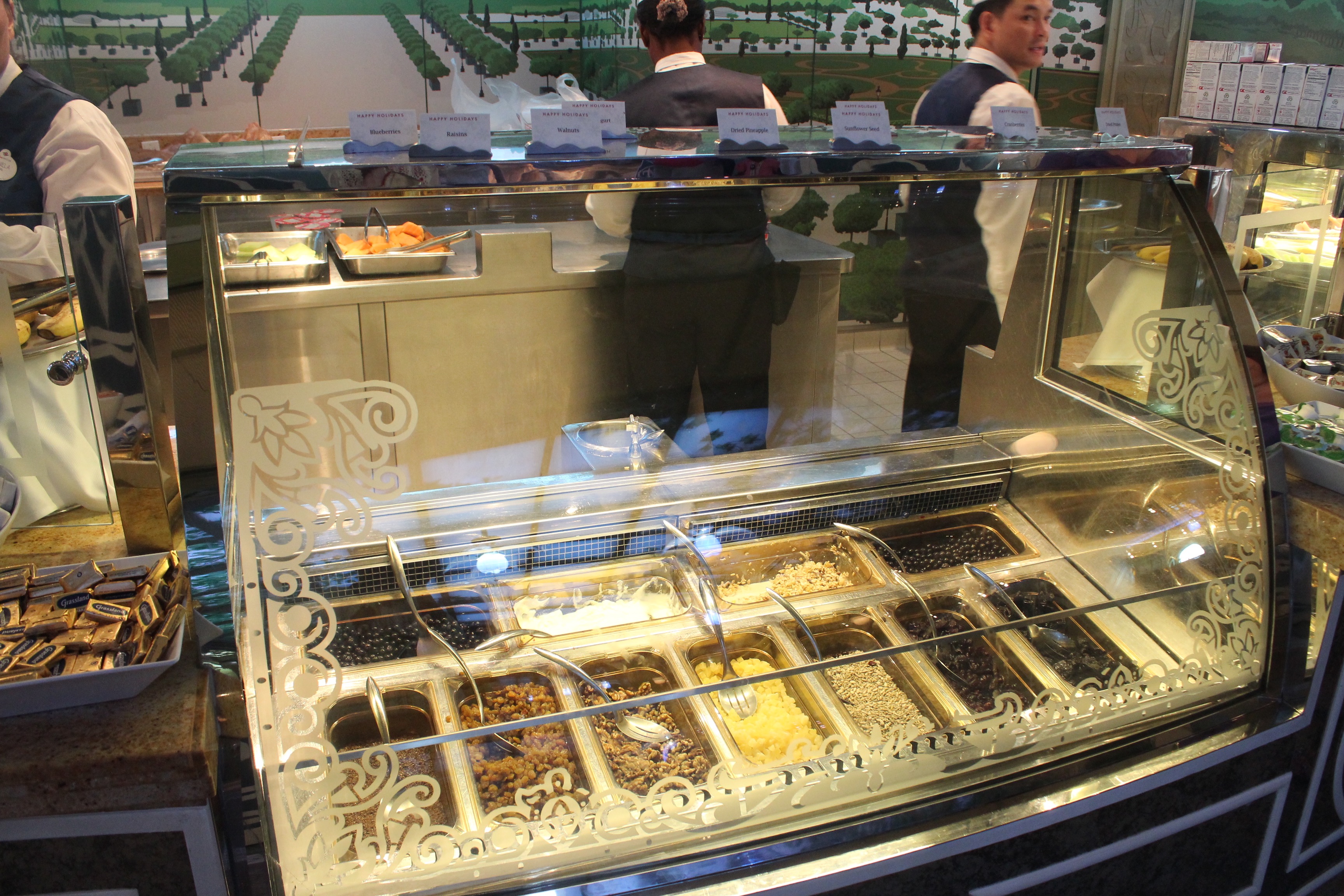 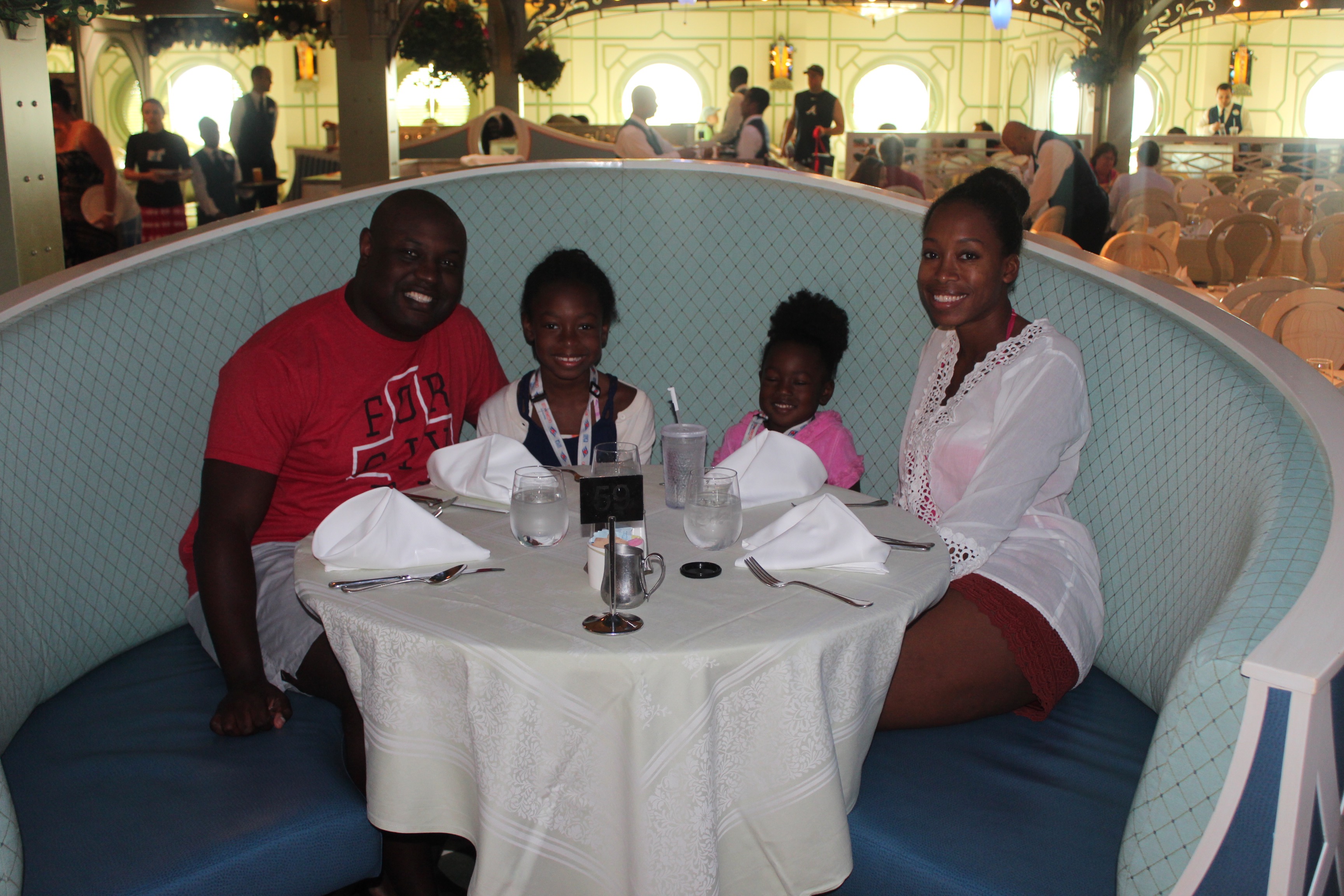 After breakfast we quickly went over to Animator’s Palate where we joined a group of families in making gingerbread houses.  We had scored tickets to this event on embarkation day (tip: most events on the cruise are free but required tickets which are used to help control wait times). 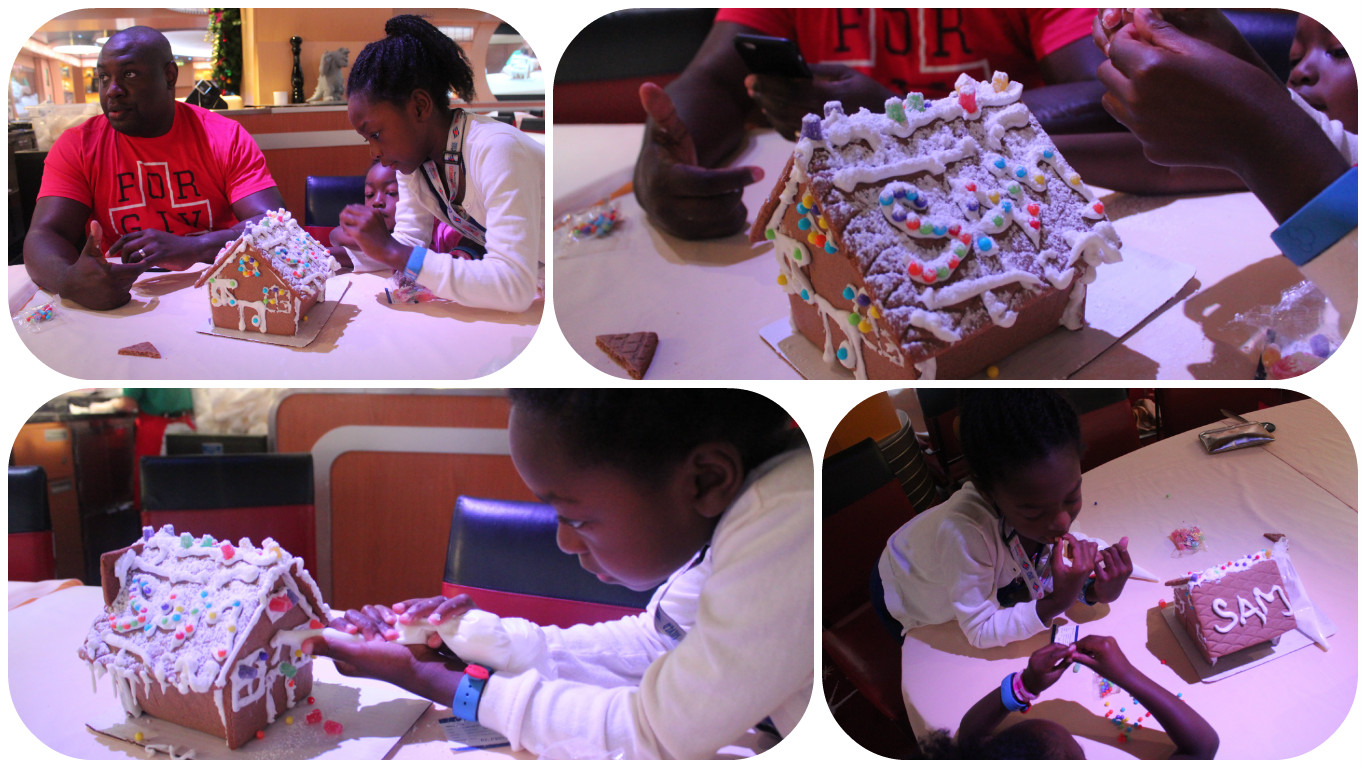 The house building was lead by one of the pastry chefs at the front of the room.  We followed him step by step, following his directions for proper construction and his decoration suggestions.  The whole process did not take too long but it was a whole lot of fun for us as a family. 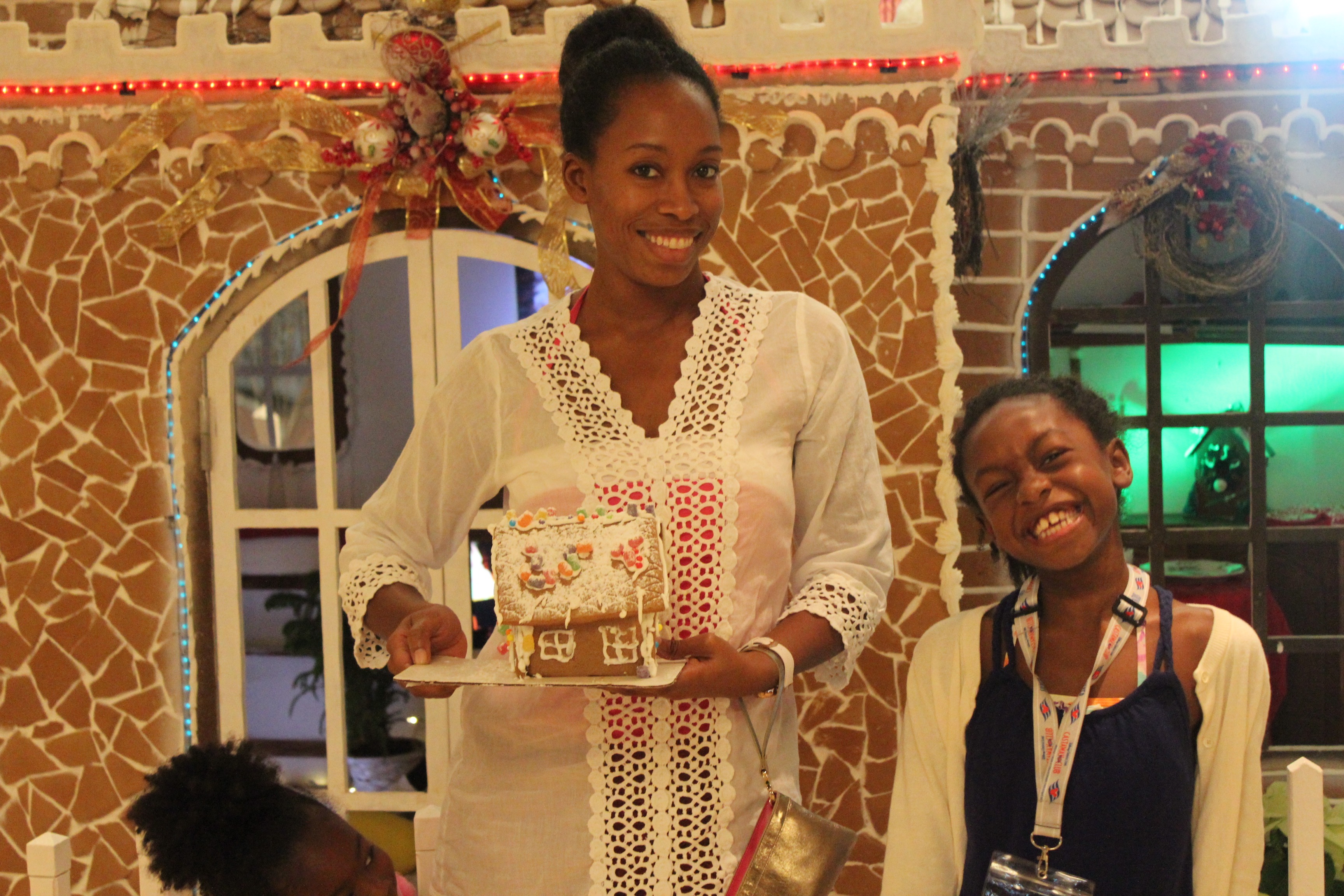 VOILA’! IT WAS JORDAN’S IDEA TO POSE IN FRONT OF THE HUGE GINGERBREAD HO– USE WITH OUR OWN FAMILY’S CREATION 🙂

On our way across the atrium to the elevators guess who we ran into?  Rapunzel was just walking through the atrium humming a tune and she was happy to stop and chat with the girls a bit.  It was such a cool experience for the girls, being able to interact with her without any lines or any rush in particular. 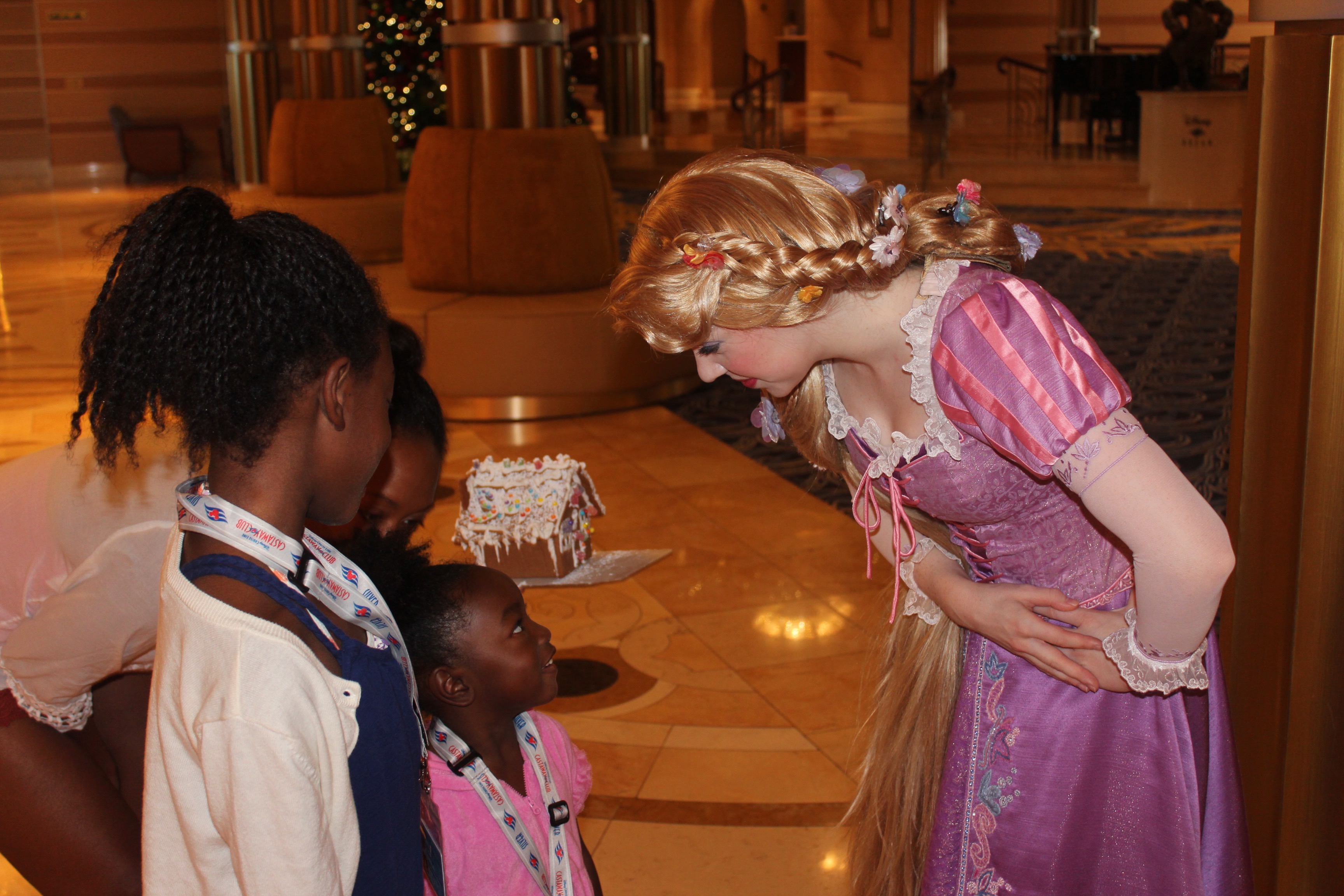 She chatted a while and posed a bit before we went on our way.  This is one of the perks of a Disney cruise; characters are always just around a corner and because of the relatively lower crowds (in comparison to the parks) it’s likely that your kids may get a moment alone with your favorite character.

We dropped the completed gingerbread house off in our stateroom and then joined the grandparents in heading up to the pool deck.  The girls desperately wanted to try the AquaDuck and Mickey waterslides and check out the pool and, despite our concerns that Castaway Cay would be too busy by the time we got off the boat later that morning, we obliged. 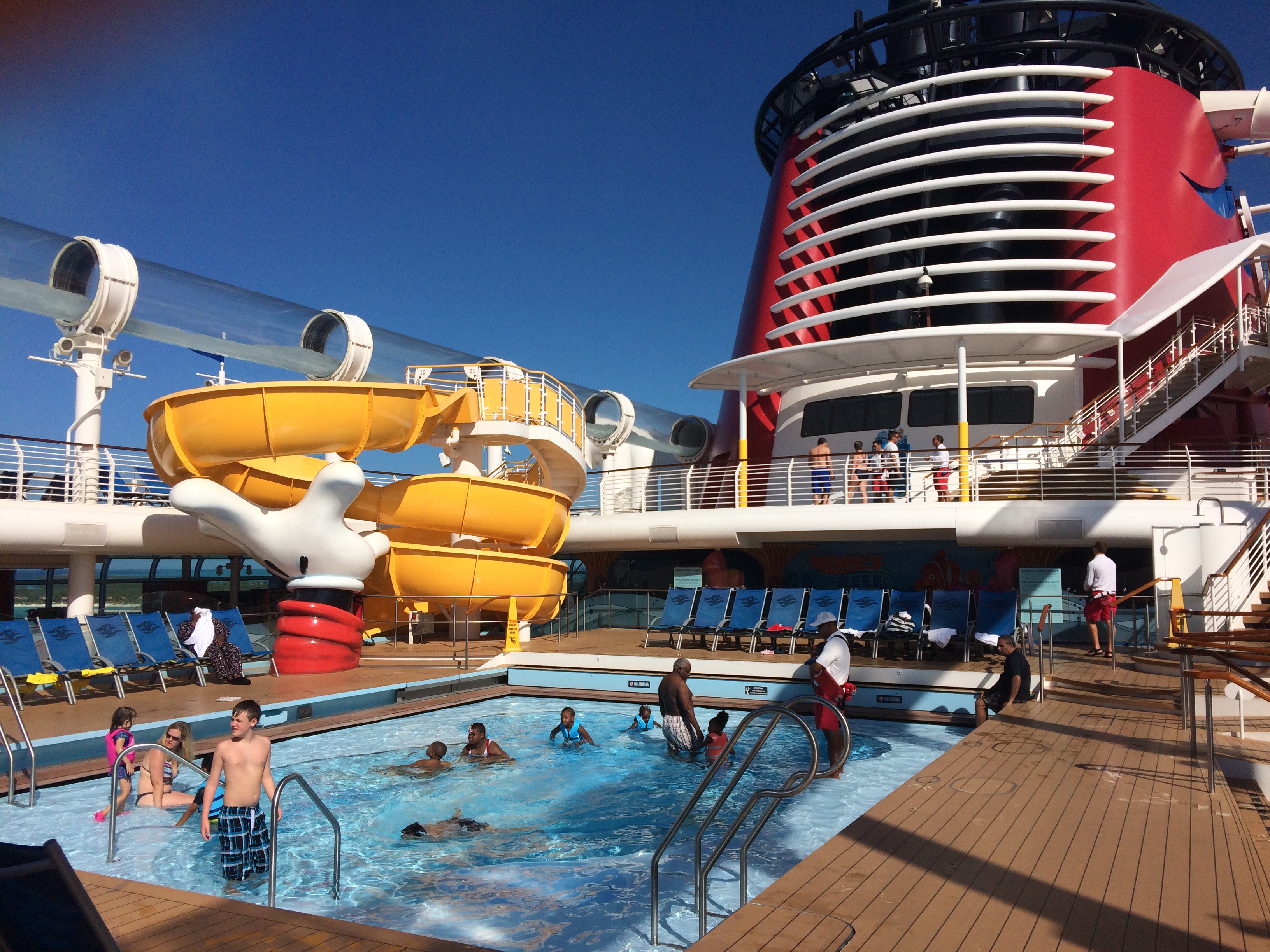 The pool deck was very quiet with only a handful of families spending time in the water or on the slides.  As always there was a movie playing on the FunnelVision screen- I think it was Hercules.  We were able to spend a good amount of time up there, riding the AquaDuck five or six times in a row with very, very short lines.  Our youngest was too short to ride the big slide but she had a good time wading in the shallow Mickey pool and practicing her blossoming swimming skills. 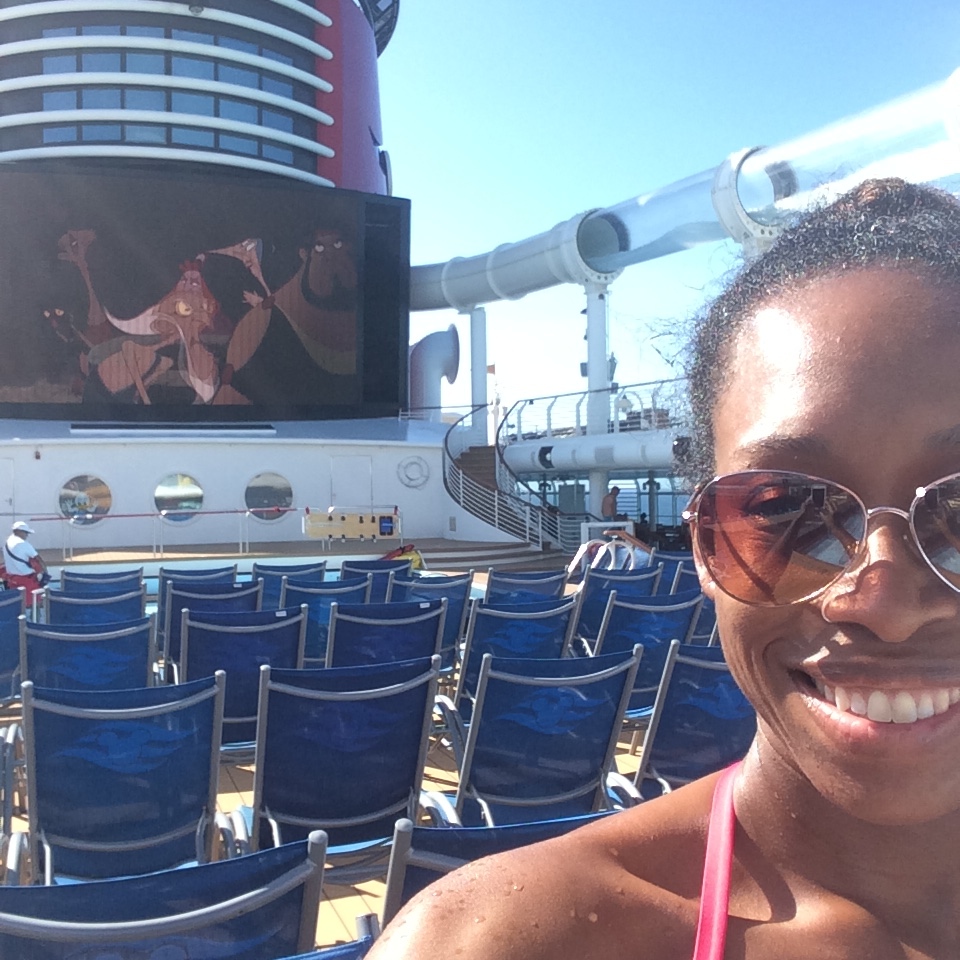 Around midday we decided to head onto Castayway Cay.  The weather that day was flawless: sunny and mild (upper 70s) with a steady breeze.  The island of Castaway Cay was immaculately clean and absolutely perfect in every way. 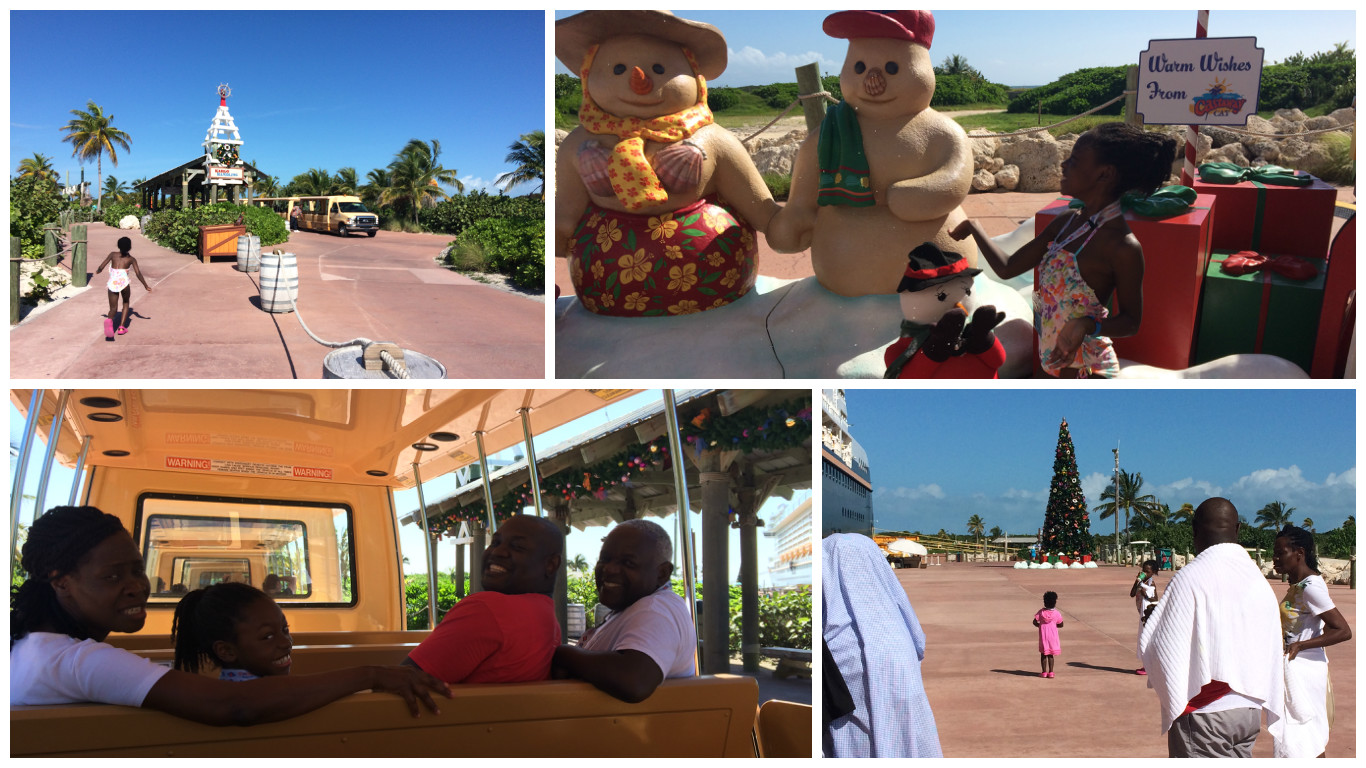 We were able to catch a tram from the dock deeper into the activity areas of the island. 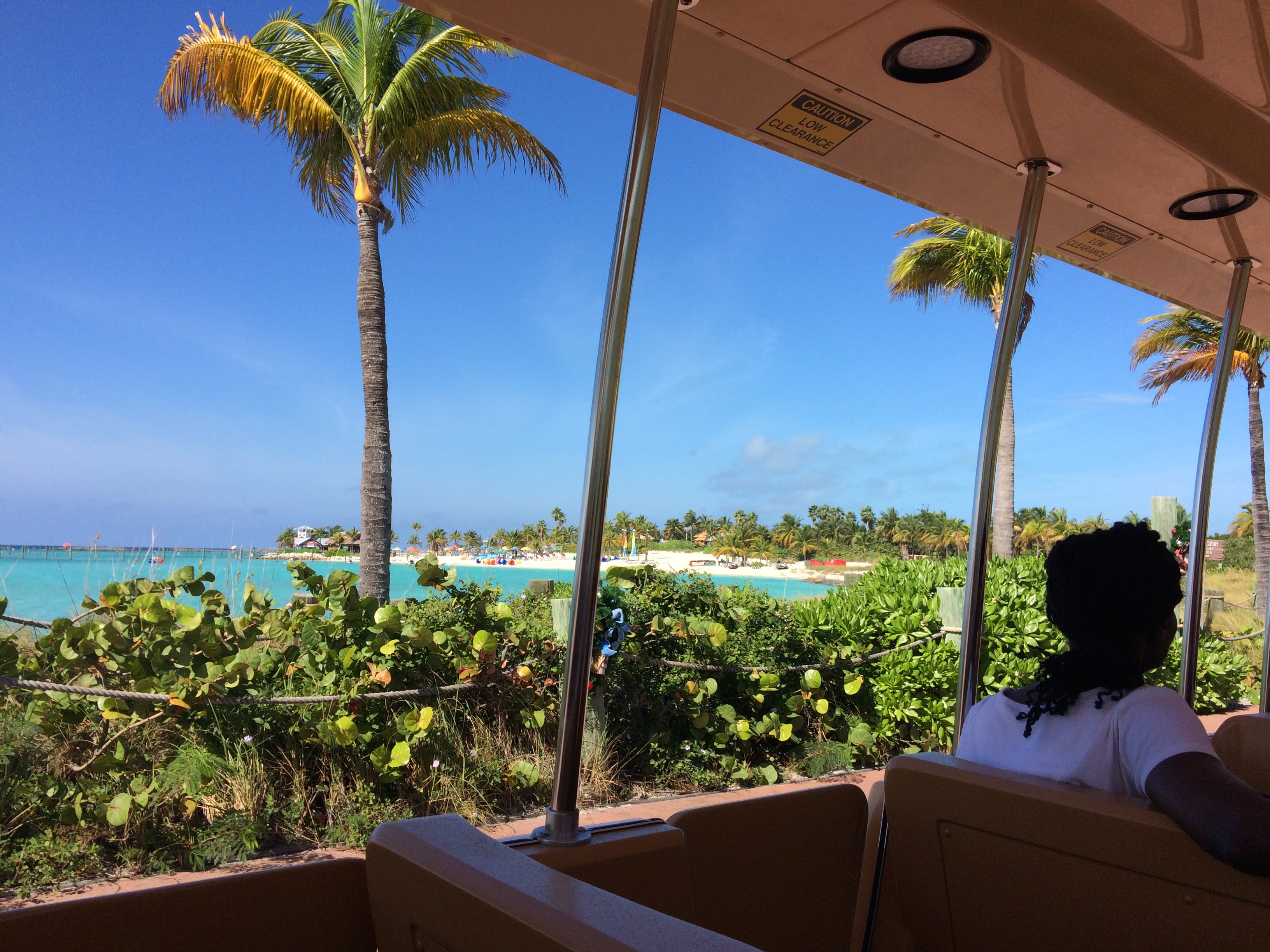 GORGEOUS VIEWS FROM THE TRAM RIDE….

Joel and I were apprehensive that we would struggle to find seats on the beach but we were able to find a whole stretch of unclaimed umbrellas and beach loungers near the water without searching for too long! 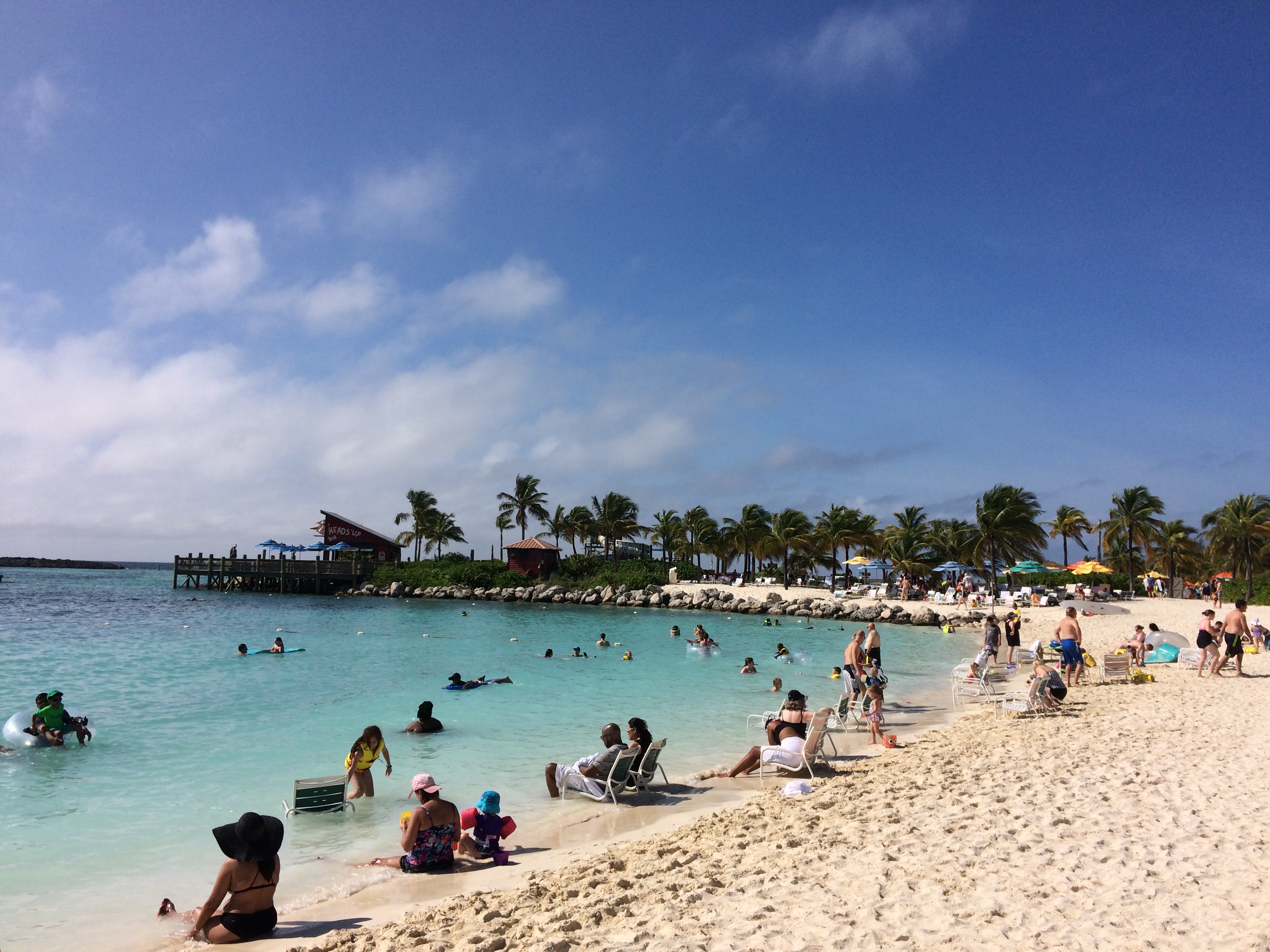 The water was cooler than the girls were comfortable with so they asked to go to the island kids club area, called Scuttle’s Cove.  I took them to the club but they had just missed the lunch time offered in the club.  I decided to take them to eat quickly at Cookie’s BBQ. 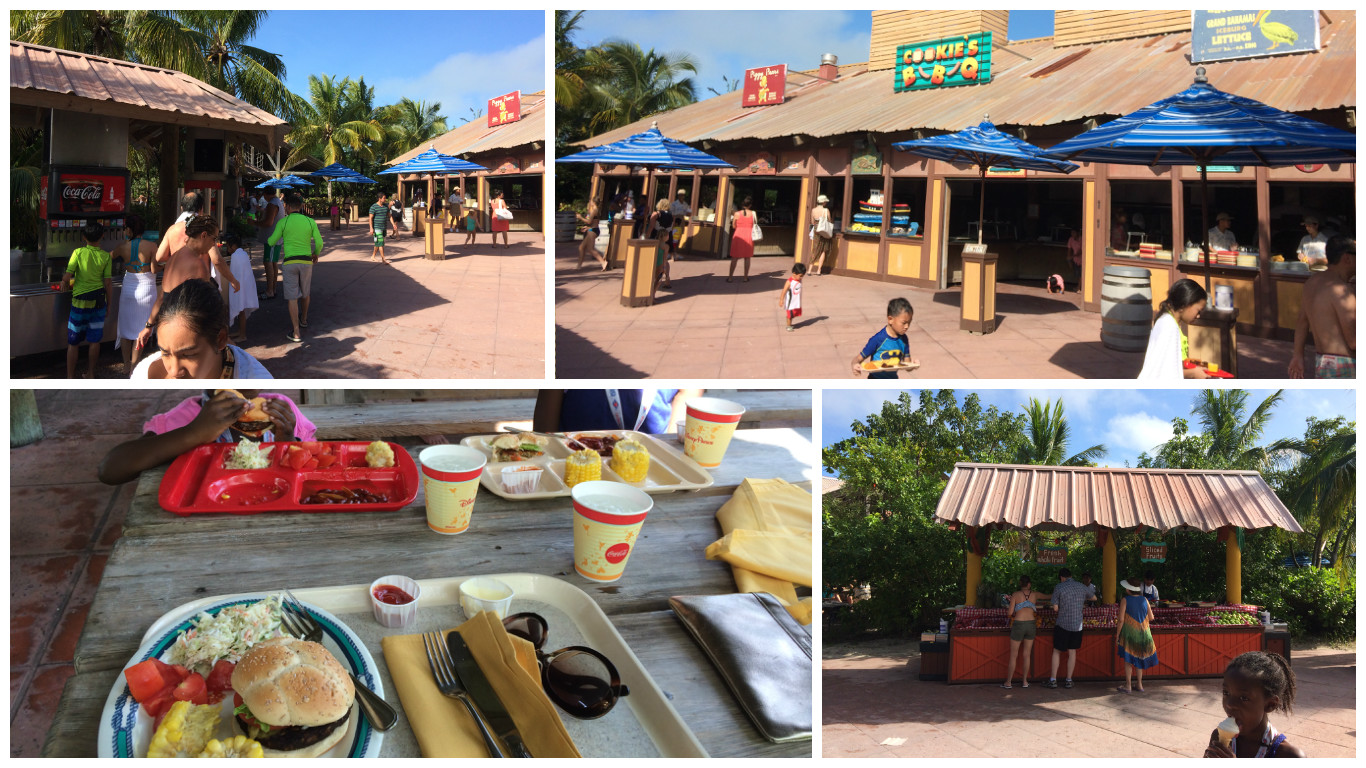 The food and variety at Cookie’s BBQ was great and both girls ate heartily.  Once again the cast members on the island impressed me with their thoughtfulness and attentiveness.  One cast member noticed me struggling by myself with our food trays and offered to help us settle at one of the picnic tables.  He even volunteered to make a run to the beverage station and took our drink orders, just to be helpful.  I was sure to let him know how much I appreciated his efforts to assist us and how genuinely happy he was to go beyond his responsibilities of bussing the tables to help me out.

Just as we were finishing lunch Joel arrived with his parents from their resting area on the beach (wi-fi on the island was very spotty and we were having difficulty communicating through iMessage).  While they ate I signed the girls into the kid’s club in Scuttle’s Cove (tip: the cell phones (Wave phones) that Disney provides parents onboard to communicate with the Oceaneer Club and Lab, also work on Castaway cay so you can always be just a phone call away from your children while enjoying the island). 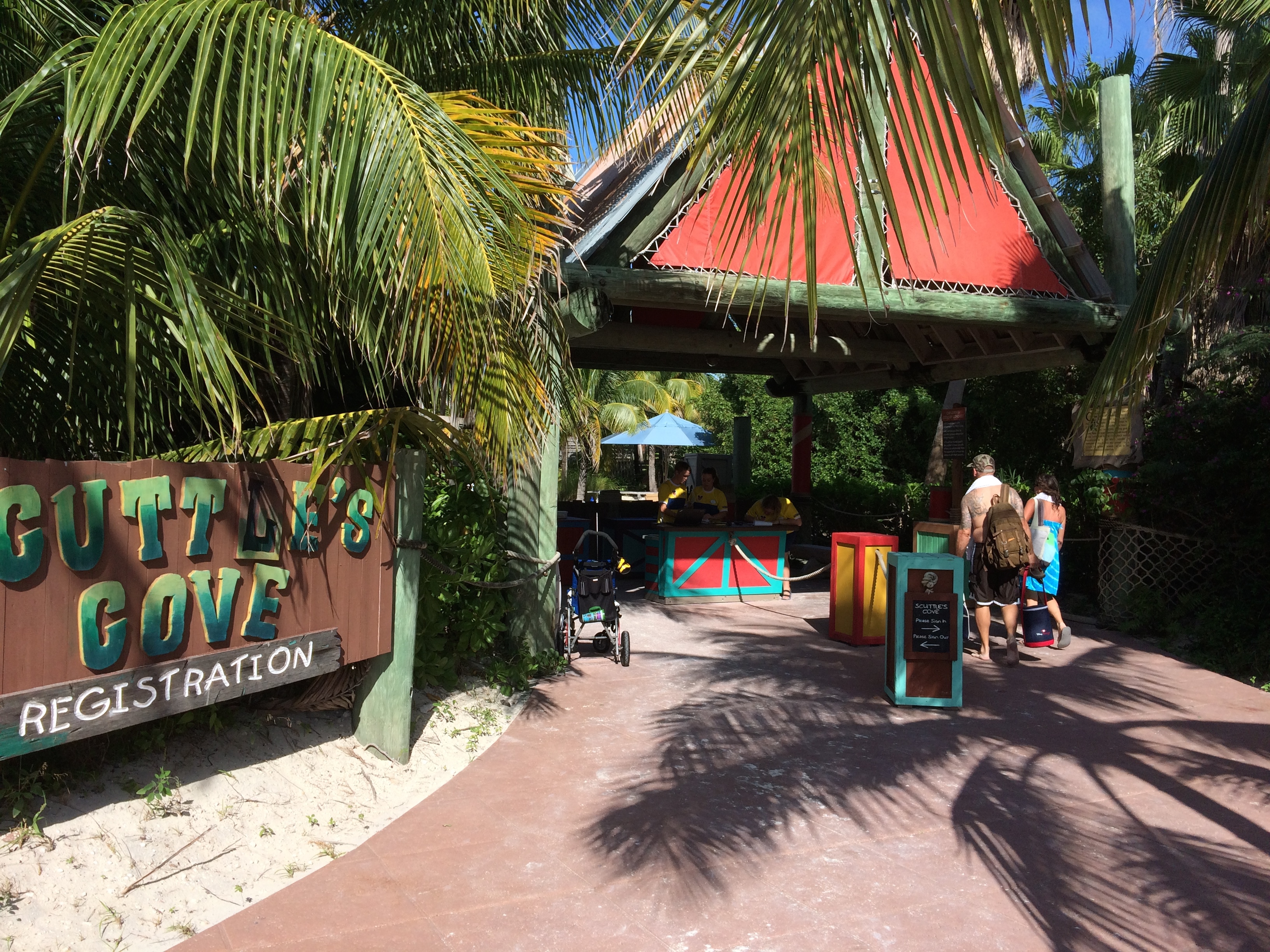 SCUTTLE’S COVE IS THE KIDS CLUB ON THE ISLAND. IT FUNCTIONS JUST AS THE CLUB/LAB ON THE SHIP WITH SECURE SIGN IN/OUT, PROVIDED LUNCH AND A BOUNTY OF ACTIVITIES INCLUDING A SPLASH PAD!

After the grown ups had finished lunch we found ourselves back on the pristine beach.  I don’t remember much after that as I quickly passed out.  When I awoke it was a little after 3 pm and the activities on the island were winding down in preparation for the 4:30 departure.  We lazily strolled back towards the ship, picking up the kids from Scuttle’s Cove on the way back. 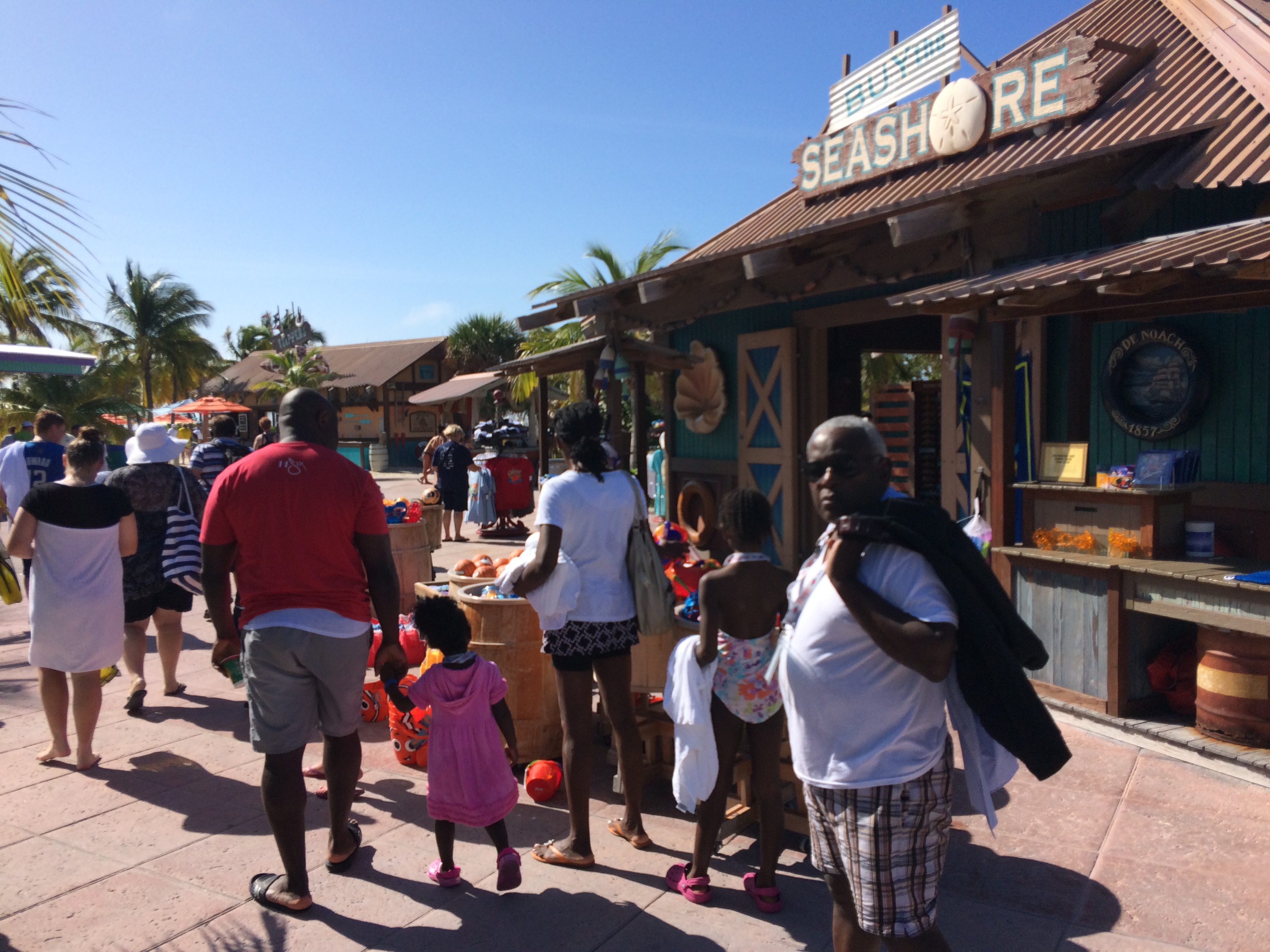 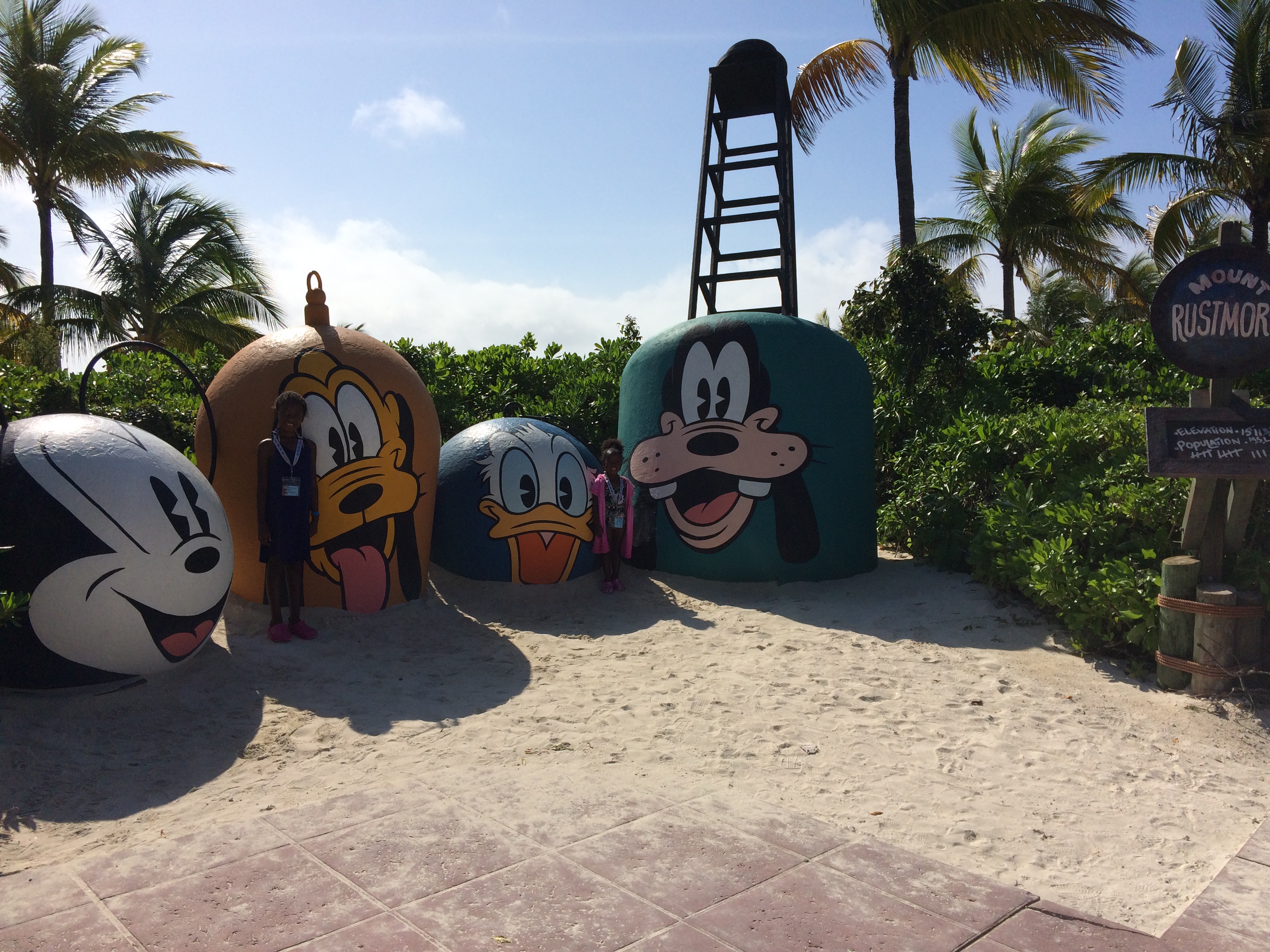 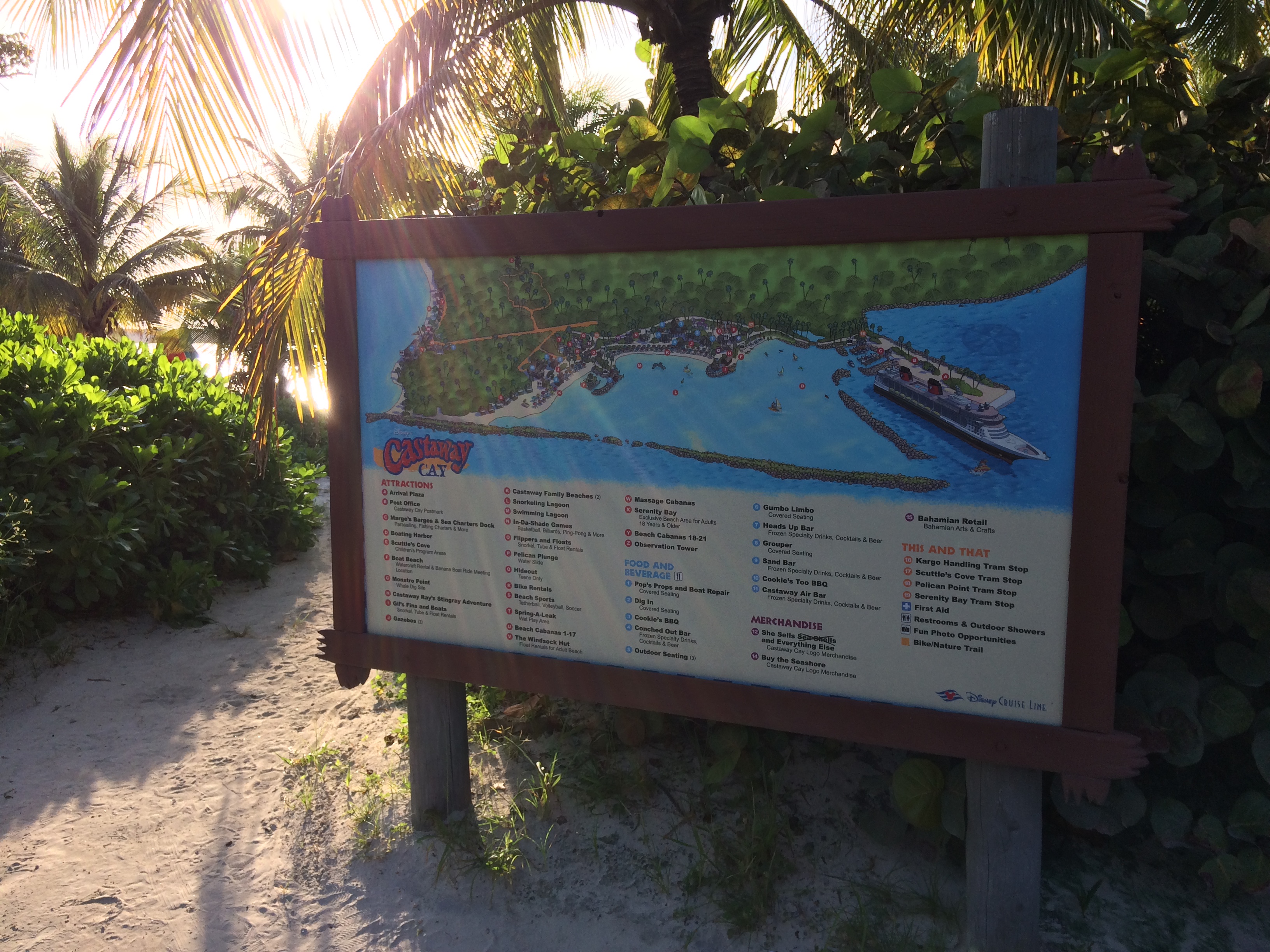 MAPS ARE LOCATED ON SEVERAL PLACES ON THE ISLAND

Onboard we cleaned up for dinner and prepared for Pirate Night, a tradition on each and every Disney Cruise.  In our room we found complimentary Pirate bandanas which we added to our homemade pirate costumes for the girls; the adults were not as committed to the theme as much but we all sported our bandanas in some way. 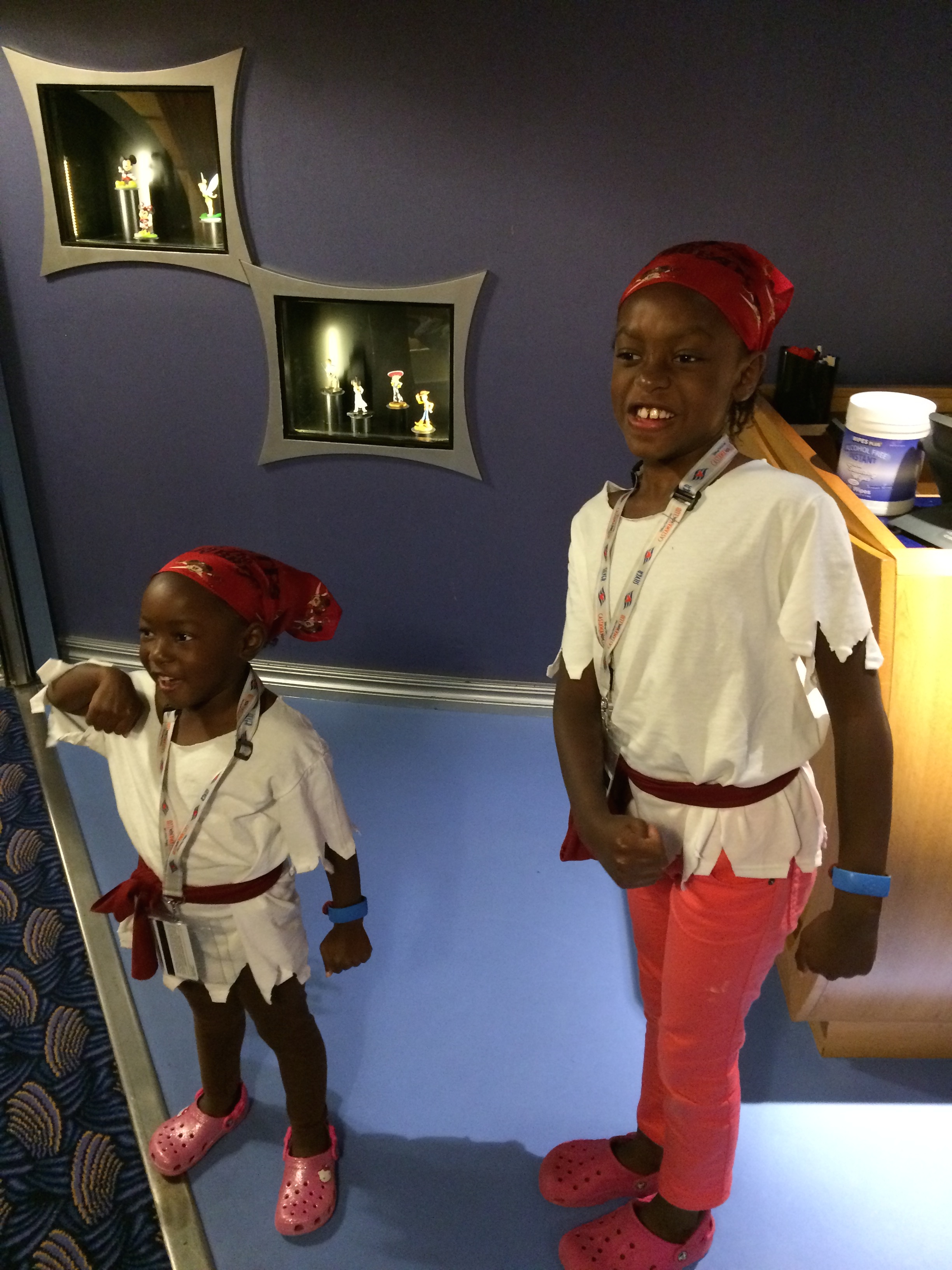 HUBBY AND I WERE LAZY THIS YEAR SO WE JUST DRESSED UP THE GIRLS IN THEIR HOMEMADE COSTUMES.  THESE ARE THIER “ARRRRRRR-GH” FACES, LOL…

The girls were excited to head to the Oceaneer Club as they were anticipating a packed Pirate Themed night there including dinner.  We figured it would be easier on everyone to let them enjoy dinner with the club and continue into the evening’s activities there instead of forcing them to eat with us, only to have them rushing through their meals and bothering us in the process.  We were thus able to enjoy a relaxed meal, again in the Enchanted Garden, but tonight with a special Pirate themed menu.  Once again, we were not disappointed in our meal selections and we were highly entertained by our wait staff who offered different brain teasers, riddles and magic tricks throughout the meal. 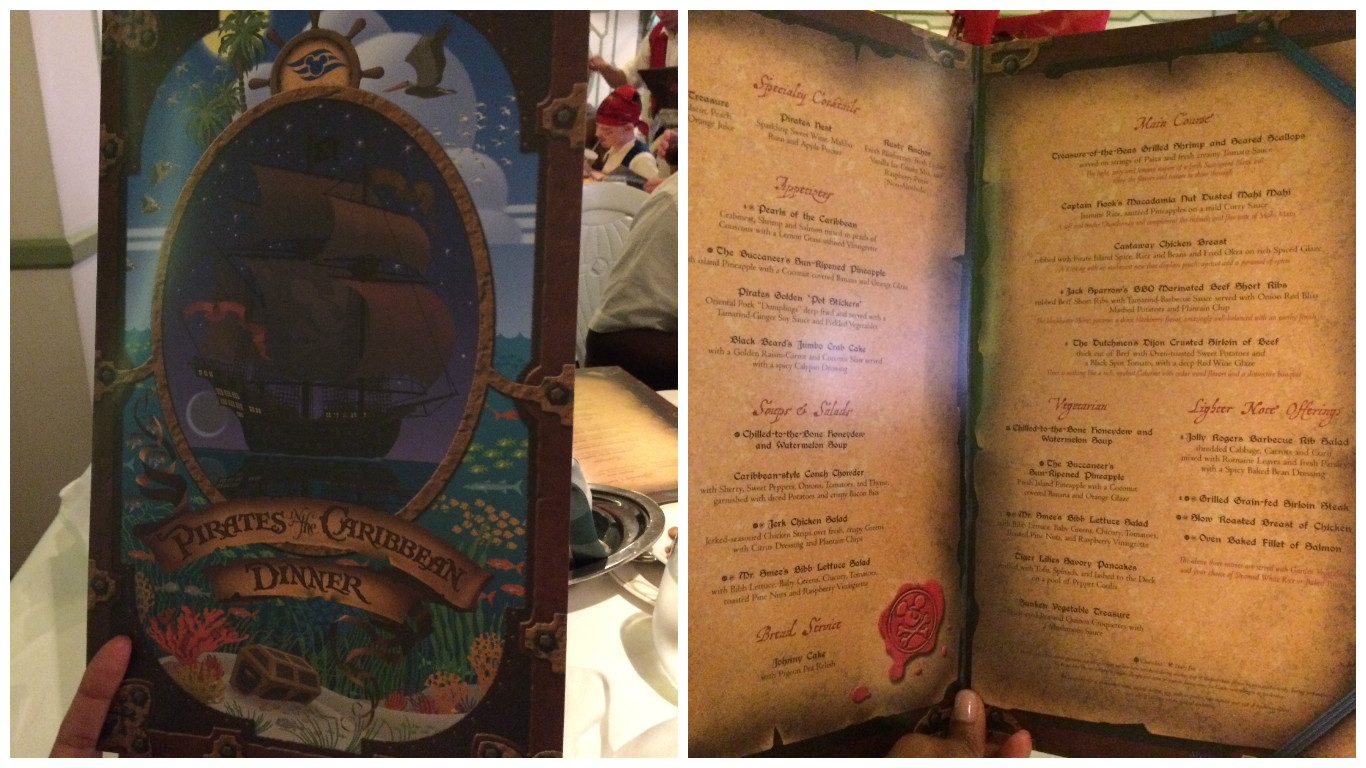 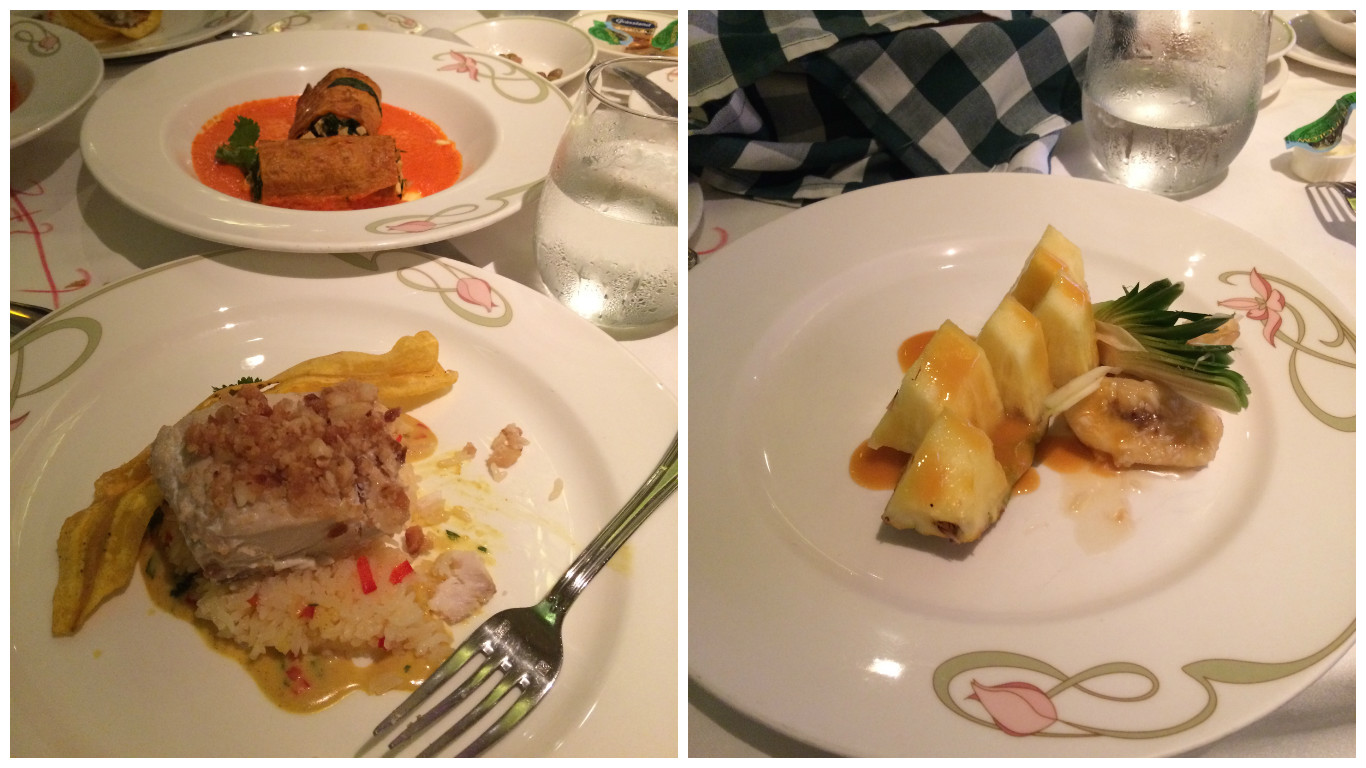 AS USUAL THE OPTIONS FOR DINNER WERE DELICIOUS, EVEN WITH THE QUIRKY PIRATE (TROPICAL/LATIN) THEME

After dinner we went back to our rooms, just for a moment…. which turned into a couple hours LOL.  We were tired from our full day of water fun on the ship and on Castaway Cay.  I settled into bed with my laptop and turned on the TV to find the current airing of Black-ish on ABC (tip: Disney cruises air all shows in realtime on their networks including ESPN, ABC, DISNEY channel, ABC Family.  On Demand programming is also available from a large catalogue of tv shows, and live action and animated movies).  At 10pm we got a text on our Wave phone from the Oceaneers Club that our youngest daughter was ready to be picked up.  Hubby went to pick up the girls and then took them up on deck to see the Pirate Night Fireworks which they all said were spectacular.  Upon returning to the room around 11pm everyone was ready to crash and we were all asleep within minutes after prepping for bed.

We had one more day left on our Disney Dream cruise and we had loved every single minute of our trip so far.  In case you missed my travelogues of the first few days of the cruise you can find quick links here:

Have any of you been fortunate enough to visit Castaway Cay?  What was your favorite activity there?  If you haven’t been as yet, what would your dream day on Castaway Cay include?